I am not always on board with Gary Mendez’s go-with-your-gut thing. And I know violence is never the answer. But oh man, in this week’s A Million Little Things, when Gary says he wants to end the man who violated Sophie? I feel it, too.

The episode centers on the way that Sophie’s guitar teacher, Peter, groomed her, did something disgustingly abhorrent to her and then made her feel like the whole situation was her fault. It’s horrifying.

Read on for the highlights of “Trust Me.”

‘ANYTHING THAT MAKES YOU FEEL A LITTLE UNCOMFORTABLE’ | We watch Sophie, who’s back at home, taking sexy selfies in her room. She’s apparently trying to recreate Britney Spears’ look on her “Toxic” single cover. She texts it to Peter, telling him she’s going to channel Brit’s energy when she goes to her audition for the music school she wants to attend. When he doesn’t answer, she calls and leaves a rambling voicemail. Gary shows up soon after, angry about her lying. He demands to know where she was. “I was with Peter,” she says, on the verge of total panic. “I think I messed up.”

Then we flash back to a month earlier, at a lesson when Peter tells her that she’s got to be more confident in her abilities. He needles her about what her original song is really about; as she tries not to cry, she says, “It’s about how my dad left without saying goodbye and how he died before I became who I was going to be and how part of me is afraid to become that person because maybe secretly I think I’ll run into him again and if I do I want to make sure he recognizes me.”

Peter tells her she’ll have to conjure up that level of hurt every time she plays the song if she really wants to succeed. Later on, he calls to tell her that he’s going to help loosen her up by having her play for him in “anything that makes you feel a little uncomfortable,” like a leotard or a bathing suit. He swears he used a similar method with a male student, and it worked like magic.

So she brings a red, one-piece bathing suit to Peter’s for her next lesson. He tells her about being in Britney Spears’ presence years before at a recording studio, then suggests that she channel Brit’s energy as she struts up on his makeshift stage. Then he pulls out his phone to film her, “so you can see your progress.”

Gary, who is listening to Sophie tell the story, can’t stop himself from interjecting, “Your guitar teacher had you wear a swimsuit during the lesson… and he filmed it?” The scorn in his voice makes her shut down; she kicks him out of her room. On the way downstairs, he calls Maggie and asks for an assist, STAT. 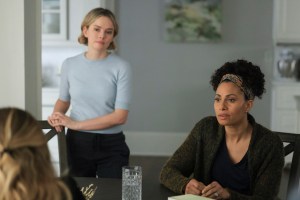 IT GETS WORSE | Maggie arrives, bringing Gina, who was hanging out with her. Together, the women coax the rest of the story out of Sophie. You won’t like to hear it, but here it goes:

Peter does this really awkward thing where he pretends he’s talking to someone who isn’t there — he plays it off as a joke, but it’s not funny and it’s just so odd! – and then he starts dancing to try to get her to loosen up and join him. She does. “We were just being dorky so I would stop being self-conscious,” she tells Maggie in the present-day, who is as horrified as Gary was that Peter is continuing to film Sophie as she grooves in her bathing suit.

The rest of that lesson continues, with Sophie feeling herself and Peter telling her that it’s “sexy, which is good, because sex sells in this business.” Ugh. And then, in the present, Sophie gets a text and starts crying: Peter told her that her photo was “inappropriate” and he can’t work with her anymore. “I was just trying to get us back to before,” she says, and that’s when we find out: before what?

When Sophie got word that she’d landed an audition with the school, she was so excited, she stopped by to tell him. They hug. He brings up Britney AGAIN. Then he pushes her hair back from her face, puts his hand on her shoulder and unzips his pants. (Thankfully, we don’t see that last part.) “He didn’t touch me. He just touched himself,” Sophie tells Maggie and Gina, who are trying very hard not to freak out. When he was done (ughhhhh), she says, Peter acted like nothing had happened.

DON’T DO IT, GARY! | Feeling responsible for what had transpired, Sophie says, “I thought the best thing to do was the same thing,” so she sent the photo of herself. “I might’ve made him think that — ,” she says. “No, you didn’t,” Regina quickly stops her, pointing out that Maggie had helped her see that about herself in regard to her uncle’s abuse.

“He groomed her, and used her history against her,” Maggie later tells Gary, who is seething. She explains that Sophie sent the photo to try to normalize things after the incident at Peter’s. “I’m gonna kill him,” he responds, but she quickly shuts that down, because his spouting off won’t help Sophie through her situation. “And then I’m gonna kill him,” he says.

Near the end of the episode, Sophie calls Delilah in France to tell her what’s happened. As she sobs into the phone, Regina rubs the girl’s back. On a slightly positive note, Maggie accepts a job with Dr. Stacy (played by I’m Sorry‘s Andrea Savage), a radio therapist with a call-in advice show.

Meanwhile, Gary is outside Peter’s house, clearly not listening to Maggie’s advice on the matter. But Rome persistently calls him, trying to talk him out of whatever he’s planning on doing. And when Peter’s wife comes home, Gary takes a step back and decides against the course of action he’d previously chosen. 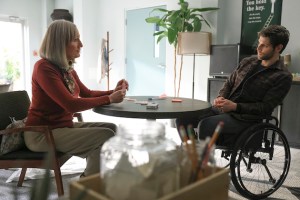 ELSEWHERE IN THE COMMONWEALTH | Rome wonders why his dad is so forthcoming in their late-night chat sessions, yet so (typically) ornery during their daytime interactions. Perhaps the answer has something to do with the woman Rome meets in the graveyard while visiting his mother’s grave one night?… Eddie plays cards with Jackie, the transgender woman who’s in rehab with him. She points out that they’re very similar. “You chose to be a woman. I did not choose to be in this chair,” he says. EDDIE, HONEY, YOU’RE MAKING IT VERY HARD TO ROOT FOR YOU. She tells him that he’s trying so hard to be what everyone expects him to be, and maybe he should try to just be himself instead. “Maybe, like me, there’s a beautiful person inside,” she says cheekily. “You just have to find her and let her out.”

The episode ends with a PSA for the Rape, Abuse and Incest National Network (RAINN), and it feels like a good idea to include that information here, too: The National Sexual Assault Hotline is (800) 656-4673, and it is safe, free, confidential and 24/7.

Now it’s your turn. What did you think of the episode?