On Aug. 3, 1896, a mysterious event takes place in London, turning a seemingly random group of people from ordinary citizens into a superpowered subgroup that becomes known as “the touched.”

What the touched do with their newfound abilities, and how society reacts to them, is the basis for HBO’s The Nevers, which premiered Sunday on HBO. In a moment, we’ll want to know what you thought of the fantasy drama, which was created by Buffy the Vampire Slayer‘s Joss Whedon. But first, a quick recap of the first episode.

Mrs. Amalia True (played by Outlander‘s Laura Donnelly) runs St. Romaulda’s Orphanage, a haven for other touched — most of whom are female and many of whom have been rejected by their families. One of these is Miss Penance Adair (Vikings‘ Ann Skelly), True’s invention-minded right-hand woman whose ability to “see” energy helps fuel her ingenious designs. Near the top of the episode, True and Adair set off to see about a girl whose family thinks she’s been possessed by a demon.

On the way, we learn that a) there’s a killer named Maladie on the loose, and she’s killed five male psychoanalysts, and b) True gets “ripplings” that show her vague snippets of the future. When the women arrive at the girl’s house, they find her chained up in her room. Myrtle is speaking a mishmash of languages — seemingly unable to respond to queries in English — but is definitely not under the Devil’s sway. And while True and Adair are explaining that they can provide a place for her to explore her new ability, some men break into the home 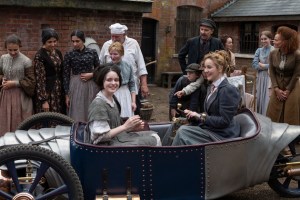 True engages in some impressive hand-to-hand combat with the men, aided by a steampunk-y flash bomb and an umbrella-turned-taser engineered by Adair. They recover Myrtle and start to get away, but the men — who turn out to be demon-looking creatures — pursue them. The trio of ladies get away by way of a tiny motorcar that Adair rigs to drop out of their horse-drawn carriage at the precise right moment, and they speed away to the orphanage.

“This is weird for us, too,” True reassures Myrtle.

In other parts of the city, we meet more players who will become important as the story progresses. These include a council of government officials including Lord Massen (The Crown‘s Pip Torrens) who fear that the touched — who number in the hundreds — are part of an “attack” from some unknown entity. Then there’s Frank Mundi (The Truth About Cats & Dogs), a grizzled police inspector on the hunt for Maladie; Augie Bidlow (Da Vinci’s Demons‘ Tom Riley), the meek brother of the woman who bankrolls the orphanage; Hugo Swann (James Norton of ITV’s Grantchester), a rich rake with plans to open a “pagan sex club;”  and finally, Dr. Horatio Cousens (Seven Seconds‘ Zackary Momoh), the doctor who can heal wounds with his hands, which makes him a very valuable ally to True and her crew. 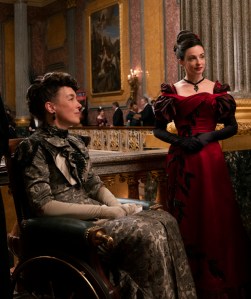 After True has a ripple indicating that she’ll be at the opera, she and Adair get gussied up and head out. On the way, they’re stopped by a gangster called the Beggar King (Truth Seekers‘ Nick Frost), who is angry that True has summoned him for questioning. He often alerts the orphanage to people who are touched, and she’s wondering if he also tipped off the demons that tried to grab Myrtle. After it seems like he didn’t, she enlists him in helping find out who did. He warns her that if things go sideways, he’ll cut her face “to a mess.” She responds, “This isn’t my face.” Um… what?

At that evening’s performance of Faust, Maladie (Once Upon a Time‘s Amy Manson) makes a grand entrance by slitting the throat of the actor playing the Devil. The killer is flanked by a man with a machine-gun-type-thing attached to his arm and a woman who can make fireballs appear between her palms. They terrorize the audience and cast until one redheaded female on stage starts to sing like a literal angel. 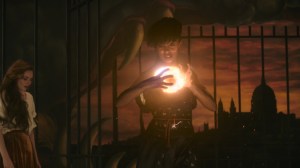 While the actress sings, certain members of the audience — including True, Adair and Augie Bidlow — are clearly affected more than others. But then Maladie grabs the singer and runs, and True quickly follows them. There’s a very cool chase-and-fight sequence that sees True dropping through a stairwell and being saved by her elaborate gown, which rips right off her before she lands on the bottom floor. She loses Maladie and the actress, whose name is Mary, when Maladie’s fireball-throwing accomplice lobs a huge orb that allows them to get away. 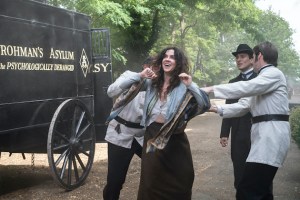 When Adair finds her friend, who’s now clad only in her corset and shift, she’s beat up and dejected. They talk about what they heard and felt when Mary’s celestial song began. Penance says she interpreted the tune to mean that “we’re woven into the fabric of the world, and we’re meant to be who we are.” And then we flash back to the day, three years before, that we saw a glimpse of at the start of the episode. Some sort of flying ship crossed over the city, releasing a sparkly substance that settled in certain people’s bodies. Those affected included Mary, Augie, Adair, Dr. Cousens and Maladie, who at the time was a woman in the process of being carted off to an asylum. After the ship is gone, everyone goes about their business, seemingly having forgotten the strange aircraft. Everyone, that is, except Madalie, who raves even louder.

Two more people were affected: Lord Massen’s young daughter, who collapses immediately after becoming touched, and True, who’d seemingly tried to commit suicide via drowning a moment before she was touched. But after the sparkle settles within her, she swims to the surface.

In present-day, we see Amalia True sleep on the floor of the orphans’ communal bedroom, the same place we saw her wake up at the beginning of the hour. Meanwhile, elsewhere in London, Denis O’Hare (American Horror Story) shows up as a sadistic doctor drilling into someone’s brain, apparently looking for the secret to the touched’s special abilities.