A Million Little Things‘ Katherine needs a hug. And a vacation. And a husband who’s able to go a season without significantly damaging their marriage.

Unfortunately, she gets none of those things in this week’s episode.

Please understand: I am very aware that Eddie’s substance abuse stems from a disease over which he has no control. I also know that relapse is a common and heartbreaking part of the recovery process, and extenuating circumstances have made this particular relapse even more fraught for poor Ed.

But it’s possible to have all the sympathy for Eddie and feel so much for Katherine  — and Theo — whose lives have once more been thrown into arrears because of something Eddie has done. (And don’t even get me started on the affair with Delilah and the child that followed. That was some NONSENSE.)

Anyway, Katherine has a really tough episode… and it looks like Sophie’s going to have a rough one next week, for a very different reason. Read on for the highlights of “The Lost Sheep.”

‘I DON’T CARE THAT YOU’RE SORRY’ | We’re plunged right back into the conversation that was happening at the end of the previous episode, with Eddie admitting everything: stealing from Regina, throwing Dakota under the bus, all of it. He swears he’s done, but Katherine is, too. “Stop. Stop,” she says. “I don’t care that you’re sorry.” He tells her he’s going to be admitted to rehab the next day and that Gary will drive him, unless she wants to? She tells him to go with Gary. 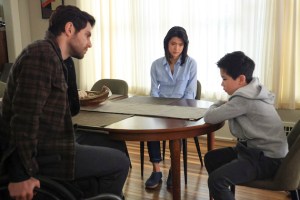 Eddie is planning to tell Theo that he’s visiting his sister, just like the Grand Canyon cover story they used when Katherine left last season. “I’m not going to lie to our son, Eddie,” she says coldly, pointing out that the Grand Canyon thing was his falsehood. “That is what YOU do.” Ouch. And true! And when they tell Theo what’s going on, the kid immediately hugs his dad and then blames Katherine for not taking better care of them.

Over at Delilah’s, Gary breaks the COVID-related house lockdown he’s imposed, but only so he can drive Ed to the facility. Sophie and Danny protest, but Gary makes it clear that he expects them to stay put while he’s gone. (By the way, he doesn’t tell them where he’s going.) This will prove important later.

KATHERINE’S BREAKING POINT | While waiting for Eddie to be finished in the bathroom before they leave, Gary asks Katherine how she’s doing. “Same old story: Eddie breaks his promise, and I’m paying the price. Again,” she says, wrecked. She adds that she doesn’t think she can do this anymore, and Gary tells her no one would blame her if she’d reached her limit. Of course, Eddie overhears this and — feeling terrible from withdrawal, as well as everything that’s happened — lashes out at Gary once they arrive at the rehab. And his words hurt: “I know what you’re trying to do. You’re trying to fill Jon’s shoes. But you’re not Jon, you never will be Jon, because Jon would never stab a friend in the back like that.” Ouch again.

Inside, during group therapy, another patient named Jackie listens as Eddie worries about how everyone hates him and calls him out for not being more focused on the damage he’s caused everyone else.

Meanwhile, Katherine leaves her mother to watch Theo and goes into the office, where she drinks and is sad. (Side note: When Katherine looks at the family photo on her desk, I LEGITIMATELY WONDERED WHO THE BABY WAS. That’s how long Delilah and Charlie have been gone!) Alan shows up after seeing her car outside. He listens to her talk about how her life is governed by everything she “should” do. “I don’t want to be Katherine anymore,” she drunkenly complains, then quickly kisses him. Immediately, she regrets it, but Alan tries very hard not to make her feel bad about it. “If you were sober and single, I’d be the one making a move,” he says. Then he drives her home.

Once there, she walks in on Eddie FaceTiming with Theo. After they’re done, Theo leaves the room, and Eddie begins talking to Katherine. But she just shuts the laptop’s lid, ending the call. 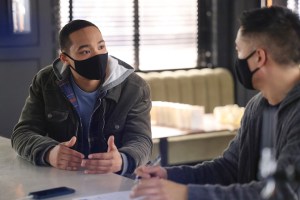 A MESSAGE FROM MOM | Bad news for Tyrell: Since his mother used his dead father’s Social Security Number in order to get a job, it’s not likely that she’ll be able to get out of Immigration and Customs Enforcement detention anytime soon. And then he misses a call from her, which makes him mad and sad at the same time. But Regina buys him a fitness tracker — which syncs with his phone and will help him not miss calls, for the next time Mom is able to phone — and it seems to make him feel a little better.

Meanwhile, Rome and his dad clash over Rome’s dad’s belief that Rome’s dead mom is sending him messages by leaving random pennies in his path, which he believes is a nod to their favorite song, “Pennies From Heaven.” Eventually, though, Gary (remember the psychic debacle?) tells him to let it go if it helps his grieving dad, and they all — plus Tyrell — light a candle for everyone’s missing moms.

GOODBYE, JAMIE POPPINS | Jamie accompanies Maggie to her doctor’s appointment, where they learn that her scans were clean (yay!) but that her high-risk status means she probably shouldn’t be on an airplane while the pandemic is still raging. So, no more Oxford. (Boo!)

To add insult to injury, a nurse that was flirting with Jamie during the visit winds up asking him out on a date, and he goes. Maggie insists that she’s fine with it, given their no-strings arrangement, but later admits that she was a little jealous. And in turn, Jamie admits that he’s realized he’s way too involved in her, and that if things continue apace, he’s going to hold her back from becoming the person she was trying to become on her own. While I generally hate this type of romantic reasoning — a good thing is a good thing, no? — the pair has a very lovely good-bye where it’s clear they deeply like each other but realize this change might be for the best.

SOPHIE’S CHOICE | When Gary returns to Delilah’s, Sophie is gone. With Danny’s help, Gary gets hold of her iPad and sees her recent texts; it seems like she’s snuck out to see her boyfriend, Jake. But when Gary runs over to the guy’s house, he finds out that she broke up with him weeks ago.

Turns out, sneaky Sophie saved someone else’s number under Jake’s name in her phone and iPad. And when Gary dials the number… Sophie’s guitar teacher, Peter, picks up. Eep!