It’s time we, the collective This Is Us viewership, give Miguel Rivas a damn break.

Sure, it’s fun to dunk on him. I’ve definitely done it more than once. But Rebecca’s husband repeatedly shows up, cares a lot and gets things done — and half the time, he does so with a ’70s blowout that would make Farrah Fawcett envious.

This week’s episode isn’t as much a showcase for Jack’s best friend as it is a reminder that he in no way was waiting for Jack to kick it just so he could swoop in and romance a grieving Rebecca. Instead, he’s a decent guy who helped ease the huge tension between young Pearson and Rebecca’s dad on the day Rebecca and Jack got engaged. And he happens to like small plates!

Read on for the highlights of “Both Things Can Be True.”

WHO’S THE BEST MAN? (PART I) | In a flashback, Jack prepares to ask Rebecca to marry him. He’s got a huge plan to turn her apartment into a carnival — complete with candy apples and twinkling lights — in order to recreate their first date. Miguel helps him ready the place and encourages him to practice the proposal, which includes props. It all goes smoothly… until Jack puts Rebecca’s ring waaaaay onto Miguel’s pinky, and it gets stuck.

Of course, that’s the moment that Rebecca’s dad shows up to tell Jack, in person, that while he won’t give his blessing to the marriage, he’ll do his best to be civil. Jack is prepared to accept that, but Miguel isn’t. “That’s not good enough,” he says, going into a speech about what a great guy Jack is and how much he has done to make himself a better partner for Rebecca. And if Mr. Malone can’t bless the union, “it says a whole lot more about you than it does about him.” Rebecca’s dad seems to reconsider, then announces that he knows a trick to get the ring off that involves dental floss. 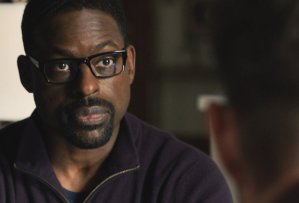 WHO’S THE BEST MAN? (PART II) | Kevin wants to ask Randall to be his best man, but can’t seem to write the email asking him to do so. Meanwhile, Miguel’s planning of Kevin and Madison’s rehearsal dinner irks Nicky, who steps in and says he wants to help. What he really wants to do is snipe at Miguel about how he stole Rebecca after Jack’s death. “It just doesn’t sit with me,” Nicky says. “My brother cuts me out of his life, replaces me with you, and you come along, you swoop in and you marry his wife.”

For the second time in this episode, Miguel will not engage with nonsense. He points out that he and Rebecca married 13 years after Jack’s death. And while he’s on the topic: “There is only one person I owe and explanation to and that is the one person I can never give one to. I certainly don’t owe one to you.”

Later, Nicky calls to apologize, and Miguel makes something clear: “He never replaced you, Nicky.” He adds that Jack asked him to stand up at his wedding, but”he couldn’t call me his best man, because I think that somewhere deep down, he was saving that place for you.” You guys, I think these two are going to turn out to be friends!

Kevin calls Randall, not realizing that his brother has spent part of the day at a deeply affecting group therapy session for transracial adoptees. Still,  Randall happily agrees to be Kevin’s best man, but isn’t ready to have THE TALK that they put off the night the babies were born. Kev totally understands, instead suggesting that they have it in person once they’re both vaccinated. This surprises Randall, but he readily agrees. 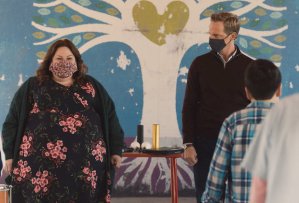 I COULD HAVE DANCED ALL NIGHT | Kate starts her new job at the school, but her co-worker (immediate boss?) Philip (played by You’re the Worst‘s Chris Geere) is less than impressed with her. He makes it clear that she’s not qualified for the job and wasn’t at the top of his list, but that someone higher up made it clear that she was going to get the position. But when she helps a young singer open up her performance of “I Could Have Danced All Night” by telling her the story of My Fair Lady, Philip looks mildly impressed. 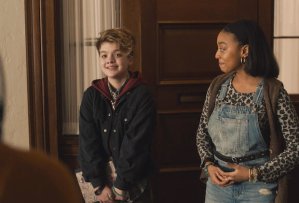 STUMBLING OVER NEW GROUND | Tess’ more-than-a-friend Alex comes over to “study,” but when Beth catches the pair in a close moment (with the door closed!), she asks them both to come downstairs and study on the sofa. So Tess calls her mom a “psycho,” and Beth sends Alex home. The whole thing kicks off an argument in which Tess makes her mom feel terrible about not being able to easily ditch the heteronormative fantasy she had about Tess growing up and getting married to a man. Beth laments to her mother that she thought she’d let go of all of that. “It’s more than letting go. You have to adjust,” Mama C says, gently suggesting that Beth adapt sooner rather than later. “Time is so precious. You blink and your daughter’s grown, and you’re holed up in her house trying to make up for 20 years of not adjusting.”

When Beth tries to smooth things with Tess later, Tess twists the knife in the way that only teens can do. “I know you’re trying. I also know you don’t have to try with Annie or Deja,” she says. “It makes me sad.” And when Beth insists that they’re still close and things aren’t dire, Tess says, “OK, Mom,” in that “OK, Boomer” way that is equally infuriating and gutting.

THE CASE OF THE EX | At the end of the episode, we see three people pick up copies of a gossip magazine that has news of Kevin and Madison’s engagement on the cover — and they’re all women Kevin has dated, married and/or hooked up with: Zoe, Cassidy (who was back in the last episode and is therefore less of a surprise) and Sophie. Of the three, only Sophie looks a little wistful as she takes in the announcement.