When The Nevers‘ first footage dropped earlier this year, I distinctly remember thinking, “Ooh, it’s steampunk Buffy with corsets!” Now that the drama, created by Buffy the Vampire Slayer‘s Joss Whedon, has released its first four episodes to the press, I can confirm: It is, indeed, steampunk Buffy with corsets — and for several reasons, that’s no longer an enticing concept.

For sure, The Nevers is of a piece with Whedon’s kickass-girl-power oeuvre, which includes Buffy and Dollhouse, as well as elements in Angel, Firefly and Agents of S.H.I.E.L.D. The period drama, which premieres Sunday (HBO, 9/8c) focuses on a (primarily female) group of 19th-century Londoners who have been mysteriously “touched” by a force that bestowed assorted powers upon them.

These abilities  — or “turns,” in the show’s parlance — range from the oddly specific (one character can change objects into glass with her breath) to damn near superheroic (another can create fireballs with a swirl of her palms). Since society does not understand the touched, it fears and reviles them. Therefore, as the series opens, many of the touched have come to live at an orphanage run by Mrs. Amalia True (played by Outlander‘s Laura Donnelly).

At one point, True calls the orphanage’s assembly a “motley coven,” and that’s apt. The description also should be incredibly familiar to anyone who watched Buffy‘s final season, when the show’s central heroine found herself the de facto Miss Hannigan for a houseful of young women who might someday follow in her stake-slinging footsteps. If you’ll allow me a little shorthand for my fellow Buffy fans: We’re essentially watching the Potentials storyline play out all over again, except this time, we know more of the girls’ names. And of course, a nefarious and mysterious force is trying to take out the touched for good. 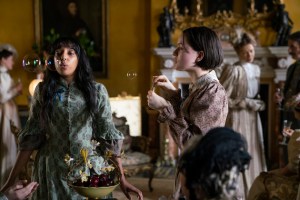 But even if you’re not a Buffy buff, there’s enough retread here to give déjà vu to viewers of Whedon’s other series. The heroine grimly soldiering on, despite the darkness brewing inside her? The brainy sidekick with a talent for conjuring things that help the heroine do her job? The loony villain spouting free verse in between bouts of very gory violence? The snippets of visions that give the good guys a knife-thin edge? A glowing orb of unknown origin? Yep, all there. At times, it feels that all’s that missing is a bleached blonde bad boy hollering about his newly acquired, effulgent soul.

To be clear: None of the above makes The Nevers a bad show, just a highly unsurprising one. What sours the experience for me is the Whedon-ness of it all, in light of recent allegations about his behind-the-scenes behavior over the years. How is an audience to champion female characters created by someone whom former female employees have alleged was “toxic,”  “hostile” and “not appropriate” during their time on his shows? (In November, Whedon announced he had left The Nevers, calling the series a “joyful experience” but saying he was “genuinely exhausted” and “stepping back to martial my energy towards my own life, which is also at the brink of exciting change.” Whedon remains an executive producer on the show; Philippa Goslett took over as showrunner.)

The bright lights in this murky situation are Donelly and her frequent scene partner Ann Skelly (Vikings), who plays the perky Miss Penance Adair. Skelly brings an adorable warmth and quirky depth to Adair, an innovative thinker who can sense electricity and who serves as True’s right-hand woman. And Donnelly is incredibly watchable as True, who deflects with wry humor, simmers with anger — though by the end of Episode 4, we’re still not sure at what, exactly — and laments that being a good general means not getting too close to your soldiers. The cast also includes Ben Chaplin (The Truth About Cats and Dogs) as tenacious police inspector Frank Mundi, Denis O’Hare (American Horror Story) as depraved Dr. Edmund Hague and Pip Torrens (The Crown) as the staunchly anti-touched Lord Gilbert Massen.

Perhaps the show’s premium cable berth ultimately will allow the show to flower in a way different from that of Whedon’s other series, all of which aired on broadcast networks. Sadly, though, the most noticeable indicator so far of The Nevers‘ more permissive network standards are the proliferation of boobs for boobs’ sake, courtesy of a side plot about an illicit gentlemen’s establishment. Know what makes it even tougher to view this show through a feminist lens? When nude women at a sex club who are present solely for men’s pleasure stroll across the screen… seemingly solely for men’s pleasure.

THE TVLINE BOTTOM LINE:  With a Buffy’s-been-there, done-that feel, The Nevers is a rehash of familiar tropes from a now-controversial creator.