A few short years after CBS threw its poorly received Odd Couple reboot to the wolves, the Eye network launched a new odd-couple comedy Thursday — this one from sitcom giant Chuck Lorre, who now stakes claim to the entire sitcom block.

United States of Al — which is sandwiched between fellow Lorre-produced laffers Young Sheldon and Mom, forcing yet another one of his comedies, B Positive, to move to a later time — centers on the friendship between Riley (Enlisted‘s Parker Young), a Marine combat veteran struggling to readjust to civilian life in Ohio; and Al (Rules of Engagement‘s Adhir Kaylan), an interpreter who served with Riley’s unit in Afghanistan. In the pilot, Al arrives to start a new life in America and slowly begins to learn just how different things are in his new land.

Case in point: During a trip to the grocery store, Al attempts to haggle with a stupefied cashier to get Riley a better price on chicken. Later, he gets pulled to the side of the road for driving too slow and tries to bribe the officer who pulled him over; the cop, a fellow former Marine, lets Al and Riley off with a warning. 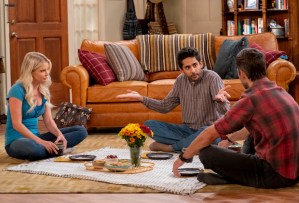 Al is upset when he discovers that Riley and his wife, Vanessa (The Ranch‘s Kelli Goss), are on the brink of divorce. He arranges for the three of them to sit down for tea so he can mediate, but Riley and Vanessa’s issues run deeper than he anticipated. Vanessa is tired of Riley’s mood swings, his excessive drinking and his refusal to get help, presumably for post-traumatic stress brought on by his time at war. Riley also refuses to go to marriage counseling, and Vanessa doesn’t trust him enough to raise their daughter Hazel. (Hazel, played by Utopia‘s Farrah Mackenzie, does not appear in the pilot.) Trust is earned, and Riley has a long way to go if he wants to win Vanessa’s back.

The premiere also introduces Riley’s sister Lizzie (Disjointed‘s Elizabeth Alderfer), who recently lost her fiancé Michael, a helicopter pilot who served with Riley in Afghanistan. Ever since Michael’s death, Lizzie has spent most nights out partying in an effort to bury her grief. We also meet Riley and Lizzie’s dad Art (Breaking Bad‘s Dean Norris), a fellow veteran who welcomes Al into his home. 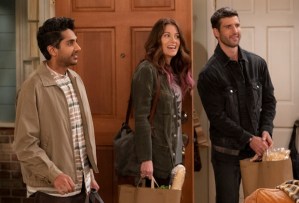 In addition to Riley’s marriage woes and Lizzie’s loss, the pilot establishes a potential ongoing storyline for Al: He intends to have the rest of his family join him in America once he puts down roots; his parents and his sister currently reside in Kabul.

What did you think of United States of Al? Weigh in via the following polls, then drop a comment with your full review.