The comparisons being drawn between THEM, Amazon Prime’s upcoming terror anthology series and Us, Jordan Peele’s 2019 deadly doppelgangers flick, are inevitable.

Both have pronoun titles, jump scares, and beautiful, dark-skinned actors as the leads. Shahadi Wright Joseph even played a set of doppelgangers in Us and plays Ruby Emory in THEM. But the similarities pretty much end there — if you don’t count the use of Minnie Riperton’s “Les Fleurs” in both. Conversely, THEM, like HBO’s Lovecraft Country, is set in 1950s Jim Crow America and because of this, the two are also sparking correlations on social media.

But Little Marvin, who created the streaming series and executive-produces it alongside Lena Waithe, hopes that true horror fans will hold off judgement until they actually watch THEM Season 1 (when it premieres Friday, April 9).

THEM focuses on the Emorys, an upwardly mobile Black family that moves from North Carolina and integrates an all-white neighborhood in Compton during a time known as The Great Migration. Not only will the pioneering Emory family fight their white neighbors’ malignant racism and bigotry, but their home is haunted by an aggressive and menacing spirit. 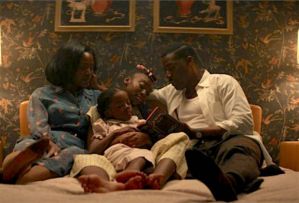 “I’m not on Twitter and I don’t really know about any of that. And I’m choosing not to know,” Little Marvin emphatically tells TVLine in response to Us and THEM comparisons. “Yes, it’s inevitable. But I also think it’s unfortunate only in the sense that there are so few of us doing this and that’s the reason why these comparisons are being made. There are 150,000 white stories that come out everyday that are almost interchangeable. And nobody ever says, ‘That’s like that.'”

“But because there are three of us in four years, that’s what happens,” he shrugs. “Just the way Lena Waithe opened the door for me, my goal now is to hold open that door for the next flood of folks to come in so that there are so many of us, you don’t have to make those comparisons anymore.”

Wright Joseph, who says she’s just happy to play one character instead of two, also believes the differences between THEM and seemingly similar fare will get sorted out once people tune in.

“I remember the first time that I auditioned for it,” she says of THEM. “I remember reading the brief description about it being a horror series taking place in the Jim Crow era and I was like, ‘Yes!’ I was so excited because I had never seen it done before … and set in Compton. I knew that Lovecraft Country was going to be coming out, which was similar because of the timelines. But when I booked it and read the first three episodes, I was even more pulled toward it. It’s fantastic, like a really good book.” 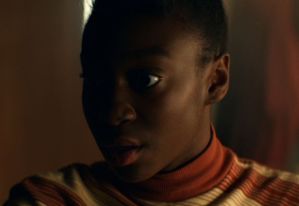 The more Wright Joseph read and the more she worked on THEM, the more she knew that this scary drama is one of a kind.

“Any type of horror series that takes place in the 1950s is going to be compared,” she says. “It’s what happens in the industry all the time. As a Black girl actor, I get compared all the time. But I think that we really tried our hardest to have individuality with our show and you can most definitely tell the difference between this and Lovecraft Country. But I love both. This was a really great experience.”

Deborah Ayorinde stars as Wright Joseph’s TV mom, Lucky Emory, and is excited for people to see her in a matriarchal role after playing a villain in the 2017 comedy Girls Trip. And like Little Marvin and Wright Joseph, she says THEM is, before anything else, another great and necessary story about the Black experience… with a little horror thrown in. 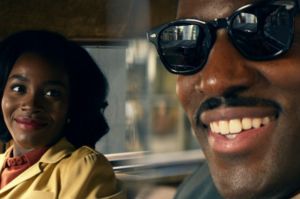 “I love us and I want us to be at the center of the frame as much as possible,” Ayorinde says of Black people. “When I see us center of frame, I celebrate. It’s a win for all of us. And two, anyone who actually sees the show isn’t going to make those comparisons. People see Black people centered and whether it be a teaser or a trailer, there is a tendency to quickly compare it to the last time they saw Black people centered, because it doesn’t happen enough.”

“We’re so capable of telling so many stories and doing so much,” the Howard University grad adds. “We kind of put ourselves in a box when we can only see ourselves the way we did last time. Anyone who sees the show, will actually compare it to The Shining and other 1970s horror films. But more than anything, I hope that people understand that while all of these projects are amazing, they all shine in their own way. We are telling our own story and I hope people appreciate that.”