We knew that Amazon Prime’s new horror anthology series, THEM, followed a hopeful Black family that moves into an all-white Compton in the 1950s, only to be terrified by the horrors of racism outside of the house and get stalked by a sinister spirit within the house.

But thanks to the official trailer the streamer released on Monday, some of those terrifying attacks have been specified.

Created by Little Marvin, who executive-produces with Lena Waithe, THEM garnered a two-season order from Amazon nearly three years ago, and premieres Friday, April 9. The trailer promptly unnerves with an eerily slowed-down version of Diana Ross’ “Home,” visions of blackface, a gaggle of bigoted neighbors staring in unison, and Pickaninny dolls hanged in effigy. Also, one dangerously racist neighbor throws an object at family patriarch Henry Emory (Top Boy‘s Ashley Thomas) while he stands on the roof adjusting an antenna. Watch the trailer below:

Betty (The Newsroom‘s Alison Pill), the most bigoted woman on the block, does her fair share of harassing and plotting in a voiceover, and can be seen putting sugar in the gas tank of one of the Emorys’ cars. When Ruby Emory (Us‘ Shahadi Wright Joseph) attends the local school, bullies harass her by making monkey noises, while matriarch Lucky (Girls Trip‘s Deborah Ayorinde) is the one who discovers the hanging dolls. Racial pioneering is not for the faint of heart. 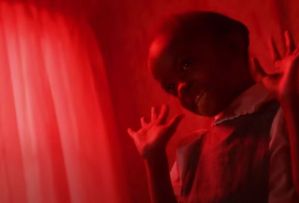 “There’s no more quintessential part of the American dream than the dream of home ownership,” Little Marvin said at a press event earlier this month. “It’s a point of great pride particularly for Black folks, to own one’s home and to pass down intergenerational wealth. But, as you probably know, that’s been anything but a dream for Black folks in this country. In fact, it’s been a nightmare. So, it’s an opportunity to tell an American dream story of home ownership but peel back those floorboards a bit.”

Inside the house, meanwhile, the Emorys’ youngest daughter Gracie (Melody Hurd) hears and sees spooky things in the basement and later, is snatched into a seemingly innocent upstairs closet by an unforeseen person, or thing. Shudder.

“Terror and horror have a different ring in the imagination,” Little Marvin added. “Let’s face it, very few of us will experience actual supernatural horror in our lives. But terror is something we’ve all experienced.”