Miss the days when The Challenge was a drama-filled booze bash versus a Mad Max sequel wannabe? You’re in luck.

While the Double Agents continue battling it out on MTV, 22 Challenge veterans are waging a new war over on Paramount+. And if you consider yourself an old school fan of The Real World and Road Rules, you’re gonna need to add one more service to your streaming device of choice.

Welcome to The Challenge: All Stars, featuring some of the franchise’s craziest and most iconic players who are back to once again crush each other’s skulls, this time high in the Andes Mountains of Argentina. Trishelle Cannatella, Derrick Kosinski, Ruthie Alcaide, Alton Williams and more are dusting off their helmets and getting back in the sand to fight one another for the chance to win a hefty $500K check. (Check out the full list of challengers here.)

The premiere (now streaming) features a brutal deep-diving water challenge that tested even the best of the bunch, but as TJ tells the group from the jump: “In order to be the best, you gotta beat the best.” So what went down and who was the first all star eliminated? Let’s recap.

“You may think you know about this game, but don’t let that get to your head because I promise you, you have no idea what’s in store for you,” TJ ominously says upon greeting the cast.

The host then spills that while it is an individual game, there will be team and duo matchups along the way. After revealing the grand prize total (which is way more money than most of these players used to vie for), he drops one gnarly catch: Only one person is taking the pot home.

“These people before would kill each other for a scooter,” Ace astutely remarks. “I don’t know what they’re going to do for half a million dollars.”

CHALLENGE DAY | In “Deep Blue Dive,” two teams face off, diving deep into the water to retrieve numbered boxes that solve math equations. Each team member must retrieve at least one box, or else the team will suffer a five-minute penalty. And the higher the number on the box, the farther and deeper the dive.

Each team must select two team captains. Winning captains will earn power, while the losing captains… “let’s just say, don’t lose,” TJ warns. Laterrian and KellyAnne step up for the Copper Team, while Jisela and Teck take lead for Silver. 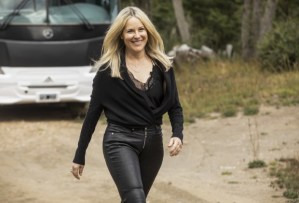 Beth gets a penalty within minutes (I would’ve bet money on that), but she’s not the only one. Trishelle is also super quick to throw in the towel. (“I thought we were gonna be, like, hanging out, having a good time, having cocktails by the pool, but no. This is a real Challenge,” the former Real World Vegas roommate observes.) Darrell then goofs and brings in the opposing team’s box, giving Copper another leg up.

Jisela, surprisingly, kicks major booty, but Nehemiah and Yes are truly the MVPs. Team Silver collects all 11 blocks, and quickly makes sense of the final equation, thanks to Yes, who’s some sort of former state math whiz.

It’s a men’s elimination day, so captain Teck is safe. Jisela, on the other hand, earns a Lifesaver (they brought the Lifesaver back, you guys!), which allows her to save a nominated player from going into the elimination. As to what happens after that, TJ won’t say. Losing team captain Laterrian is heading straight into the Arena, and the house must decide which male from either team will go up against the Road Ruler.

DELIBERATION | Laterrian tells Syrus in private that he wants to go against Ace, since he just met the guy 24 hours prior. At the house meeting, Syrus relays that message to the group, but the house is split on whether the losing captain should even be allowed a say. Ace calls everyone monsters and quickly gets defensive, causing all of the votes to fall his way.

THE ARENA | Jisela opts not to use the Lifesaver to save Ace, recalling how he once called her “dead weight” back in The Gauntlet II. TJ announces the elimination will be a good old fashioned pole wrestle! (Classic.) Whoever wins two out of three rounds will stay in the game. The horn blows, and the men immediately slam each other into the ground. It gets down and dirty, but the feisty Laterrian secures the W in just two rounds, sending Ace packing.

What did you think, Challenge fans? How ugly will these OGs get? Grade the episode below, then sound off in the Comments!