It’s a love story for the ages: Woman meets man. Woman marries man. Man implants chip in woman’s brain to track her every move and merge their minds.

That’s exactly what happens in HBO Max’s latest sci-fi comedy Made for Love (the first three episodes are now available to stream). The couple in question is Hazel Green (How I Met Your Mother‘s Cristin Milioti) and Byron Gogol (Tell Me a Story‘s Billy Magnussen), a pair that rushes into marriage, hoping to spend the rest of their lives inside a sealed tech-enhanced system called “the Hub” that mimics the outside world. Byron is a tech billionaire prepping his new product, the Made for Love chip, that will help the world’s couples read each others’ minds and live happily ever after. Or so they think. When she realizes Byron’s plan to have them be the chip’s test subjects, the already suffocated Hazel tries to escape the horror show that is her marriage and life inside the Hub’s prison-like walls.

With a relationship that extreme, maybe Hazel’s dad (Everybody Loves Raymond‘s Ray Romano) has a point with the whole sex doll thing. (More on that later.) Will Hazel be able to regain her freedom and agency? Read on for the highlights.

We first meet Hazel as she’s climbing out of a hatch in the middle of the desert. She’s soaking wet and out of breath, but smiles graciously as the sun hits her face. She gives a very stern middle finger to the building behind her before she gets to stepping. 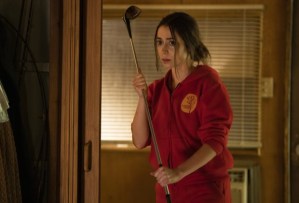 In a few flashbacks to life inside the Hub (aka Gogol Industries’ tech campus), we learn how Byron tracks every aspect of Hazel’s life, including her mood, biological stats, and yes, even the quality of her orgasms. The couple hasn’t left the Hub in 10 years, which is strange, but perhaps not as strange as having a dolphin in their swimming pool. (Her name is Zelda, by the way.) Flashing further back to childhood, we see a young Hazel accidentally drink her dad’s moonshine thinking it’s water. But let’s put a pin in that.

Hazel meets with Gogol employee Bennett, who asks her all kinds of intrusive questions about her orgasms and mood ratings, stats she must then sign off on. Just 10 minutes in, and her existence seems like something out of 1984, but worse. Later, at a meeting with the company’s board of directors, Byron announces that he and Hazel are going to be the first test couple for the Made for Love chips. Hazel forces a smile, but struggles to mask her fear. Feeling like she has no other options, she puts on a fancy dress, ties a bed sheet around her neck and, using Gogol technology as weight for the makeshift noose, jumps into the pool hoping for death.

In the present, Hazel hitches a ride to a dingy strip club. She sneaks into the employee lounge, stealing new clothes and a six-pack of beer because hey — after years of trauma, who wouldn’t need a drink or six? Little does she know, Byron has sent one of his minions, Lyle Herringbone (Veep‘s Dan Bakkedahl) to hunt her down. He tells her he’s on her side, but she doesn’t believe a word of it. He follows her into a back room, and when he goes to hit the light switch, she swings an axe through his hand, and they both scream loudly and comically. She traps him inside by knocking a vending machine against the door before fleeing the scene, beers still in hand. (Atta girl!) 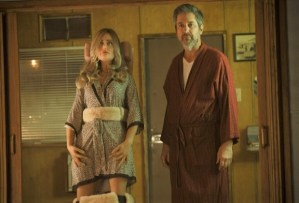 The premiere ends with Hazel hitching another ride to her hometown of Twin Sands. As she’s walking down a street, Byron calls a random man’s phone. Through that guy, he tells her she’s “already Made for Love” — meaning she’s already been microchipped. She freaks out and heads to her dad’s house, only to find him making love to his synthetic partner, Diane. “Welcome home,” he says just before she faints.

Liked what you saw? Episodes 2 and 3 are also available now! Here are a few notable tidbits from those installments:

* Yes, Herbert’s partner is, in fact, a non-human sex doll, prompting Hazel to ask: “So, um… how long have you two been, uh… doing whatever this s–t is?”

* The relationship between Hazel and her dad is strained, partly thanks to not having talked in 10 years, and partly stemming from their past, which we’ll learn more about in upcoming episodes, says the show’s EPs.

* In another childhood flashback, Hazel finds her dad sleeping outside because he was too drunk to drive. Meanwhile, there was no food at home. What other kinds of neglect did the poor girl suffer?

* We learn more about what the Hub is and how it works. During a press interview, Byron explains it’s a “super-structure made up of virtual reality cubes, all in different sizes, each with its own individual virtual biosphere.”

* Byron may be a super smart tech type, but dude doesn’t know who Willy Wonka is? That’s whack, especially since he’s running the dystopian version of the Chocolate Factory.

* Zelda the dolphin points Hazel to a chute at the bottom of the pool, and that’s how she escaped the Hub. Hooray for pet dolphins!

* In a face-to-face chat, Hazel tells Byron she wants a divorce. And later, she tells him through the chip (since he’s always watching her): “I don’t know what I want, but I know I don’t want you.”

Now it’s your turn! Grade the Made for Love premiere below, then drop some Comments!