HBO Max’s newest series Made for Love is about to unveil a dystopian love story full of pure terror and comedy gold.

Premiering Thursday, April 1 with three episodes, the black comedy tells the story of Hazel Green (How I Met Your Mother‘s Cristin Milioti), a woman on the run after her tech-billionaire husband implants a tracking device inside her brain to watch her every move. As she flees the tech company’s futuristic VR compound called “the Hub,” hubby Byron (Tell Me a Story‘s Billy Magnussen) chases her back to her desert hometown of Twin Sands. It’s there that Hazel seeks help from her dad, Herbert (Everybody Loves Raymond‘s Ray Romano), a man she hasn’t seen or talked to throughout her 10-year confinement and allegiance to the very-ethically comprised tech venture. But will she be able to fully break free?

Here, TVLine talks to EPs Christina Lee and Alissa Nutting (the latter of whom authored the original novel) to discuss what’s in store for Hazel and Herbert’s troubled father/daughter relationship, finding the perfect cast with the right chops and how the series walks its delicate tonal tightrope. (Click here to read what stars Milioti and Magnussen had to say.)

TVLINE | Christina, what was it about the novel that made you want to get involved in its adaptation?
CHRISTINA LEE | When I was introduced to Alissa’s novel, I fell in love with it right away. I love the fact that she had this very dark premise that was disturbing, with this husband that puts a chip in his wife’s brain, and yet, the book made me laugh out loud so much. I thought, what a great show idea to be able to tell the story with that tonal balance. When I started working with Alissa, I appreciated the fact that she wanted to expand the world from her book. She has these great characters and we honored those characters in the series, but we really expanded their stories and the world around them.

TVLINE | Alissa, how did you create and maintain that tonal balance? The story is so dark and twisted, but it also has so much levity to it.
ALISSA NUTTING | Luckily, Christina and I are both huge fans of science fiction and comedy, and we really wanted to do something that blended those two. In terms of thrillers and suspense and even Hazel’s character, when a character is running all the time or is always in danger, you’re not really getting the chance to get to know him or her. Cristin [Milioti] is such a versatile actress, so it was fun thinking of these dual lives for the characters, with these comical moments and this desert life in Twin Sands, and then this kind of Stepford housewives mask in the Hub.

TVLINE | Did you have any concerns about adapting your novel going into the project? And how does the show deviate from the book, if at all?
NUTTING | As an author, my main concern was that the book is so internal, and I really wanted to make it a dynamic viewing experience for our audience and also make sure that we were showcasing the full range of our amazing cast’s talent. All the main actors are such superstar thespians; we really lucked out. So we wanted to make sure we were fully utilizing them and the multi-layers they can bring out in these characters.
LEE | They’re all really strong dramatic actors, as they are comedic actors. We were really lucky with that. 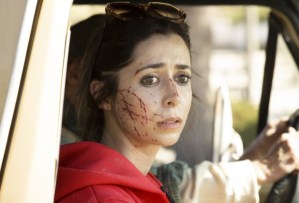 TVLINE | Let’s talk a little more about the cast. Why were Cristin, Ray and Billy the right choices to bring the book’s characters to life?
NUTTING | I really loved Cristin’s dramatic work so much in Black Mirror and Fargo, and I knew she had the comedy chops from How I Met Your Mother. Then, all of her stage work… there’s nothing she can’t do. Hazel is a character who, at times, can be frustrating and very complicated. We knew we needed an actor who had a certain amount of vulnerability, where even when they were making choices that kind of infuriated you, you were still understanding them even if you weren’t approving them. You can extend sympathy and empathy even if you felt like they were doing the wrong thing or were experiencing a pretty deserved consequence.
LEE | With Billy, again, we were fans of his before we started working with him, but what was really important to us was to have a villain-type character that you can empathize with. That’s so much of what Billy brought to the character. It’s too easy to have someone that you just hate or is evil. We thought it was interesting to see somebody who is those things, but also truly loves his wife and wants her back and is doing all of that in a misguided way. The vulnerability Billy brought to the character was very helpful in shaping the character. With both Cristin and Billy, we went back and rewrote during our pandemic shutdown based on things we had learned from them. And then Ray, we call him No-Bad-Takes-Ray!
NUTTING | One and done Romano!
LEE | So many times, we we’re like — It’s true! Everybody loves Raymond!
NUTTING | In the book, Herbert is a bit more of a villain, too. Perhaps a simpler villain. And so that was a relationship we were able to complicate really beautifully, where you have these two flawed characters in Herbert and Hazel who absolutely have made mistakes, but absolutely love each other. They’re both stubborn, too, and trying to figure out the best way back to each other.
LEE | I do want to add, there were times where Ray literally made us weep from behind the monitors. We’d go up to him and be like, “Ray that was so beautiful.” And he was just like, “Really?” [Laughs]

TVLINE | What’s on the horizon for the relationship between Hazel and Herbert? Did he have anything to do with Hazel running away from Twin Sands in the first place?
LEE | The second half of the series gives a little bit more context as to what their relationship was like and what the pitfalls were, where you kind of understand how she could’ve ended up [in the Hub] for 10 years. It’s not black or white. I think that mirrors a lot of relationships that we discussed when we were developing this project. It’s never an easy answer. There’s a lot of clarity by the end on each person’s choices, but you see that it’s also complex.
NUTTING | A huge theme of the show that they play into is one of facing the past. Both of the characters have elements of their relationship that they want to resolve. For Hazel, especially, her path to Byron is really rooted in her relationship with Herbert, so that’s something you’ll see teased out.