If you took the futuristic dread of Black Mirror and infused it with levity and a dreamy, Disney-style romance, you’d get HBO Max‘s Made for Love.

In the dark comedy (which premieres Thursday, April 1 with three episodes),  thirtysomething Hazel (How I Met Your Mother‘s Cristin Milioti) is on the run after being trapped in a suffocating, decade-long marriage to Byron Gogol (Tell Me a Story‘s Billy Magnussen), a controlling tech billionaire who digitally tracks her every move. When Hazel discovers that her husband has implanted a monitoring device directly into her brain, she realizes she must reclaim her independence and escape the harrowing experience once and for all.

Through the chip, Byron’s watches as Hazel flees to her desert hometown to take refuge with her widower father Herbert (Everybody Loves Raymond‘s Ray Romano) and his synthetic partner (read: sex doll), Diane.

Sound creepy and off-kilter? Let’s just say things are about to get weird!

TVLine invited Milioti and Magnussen to preview their characters’ troubled, dystopian marriage, and reveal how this Love story compares to The Crown, a certain Charlie Brooker anthology and yes, even The Little Mermaid.

TVLINE | Cristin, how many interviewers have compared this show to Black Mirror, and are you sick of hearing that yet?
CRISTIN MILIOTI | Yeah… [Laughs] No, I’m not sick of it! It was brought to my attention recently. Someone was like, “Oh, you’re similarly trapped by a man in a circumstance that’s like a hell,” and I was like, “Oh, yeah! That’s true.” Obviously, there are huge differences in who these women are, but I do think you could certainly draw a similarity in terms of having a terrible situation foisted upon you and having to figure out how to escape it. 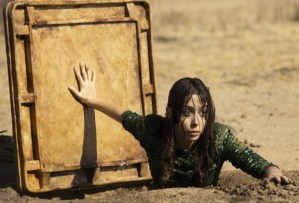 TVLINE | This is such a dark story, but it also has heaps of lightness and funny moments. What were your first impressions of the scripts? What pulled you in?
MILIOTI | I’d never read anything like it. I’ve never seen a marriage like this. I’ve never seen a relationship between a father and daughter like this. But also, it kept me on my toes, and the idea that it could be so terrifying one second, and so funny the next… I’m really attracted to things like that — obviously, to your Black Mirror point. I just thought it was really singular.
BILLY MAGNUSSEN | Love is crazy. It is absurd. It’s all over the place, and adding this weird tech-sci-fi element on top of it doesn’t take us out of the reality that love is a challenging thing to understand and accept in our lives. Our show’s about a divorce, and two people that lived a life together. They are so far apart in their idea of what love is, and it’s being questioned over and over again. I think that’s one of the most intriguing things to put on the table. What is authentic love? Where does it begin, where does it end, where can you get better at it?

TVLINE | Why does Hazel rush into this relationship in the first place, when she knows it means moving into this company’s strange hub and being secluded from the outside world?
MILIOTI | I think that’s what the show addresses so beautifully. She’s promised a quick fix. “I will make your life better right now! I will give you all the money you ever dreamed of, you’ll never have to worry about anything, you’ll never have to deal with anything, you can escape this life that you feel trapped in” and… it’s just another trap. Something Billy and I have been talking about is the phenomenon of people sometimes falling in love with the idea of each other. She’s enamored with the idea of “This is the life I always dreamed of and I don’t have to do anything to get there. I just have to say ‘yes,'” and is immediately taken prisoner. I thought that was so human.

We’ve seen so many examples — I don’t know if you’ve watched Season 4 of The Crown, and I know that it’s fictionalized! — but who wouldn’t want to see what it’s like to be a princess? Who wouldn’t think there’s a dream in that? “Oh, I’ll have access to things, and I’ll be able to enact change in some way. How bad can it be?” and you get in there, and as we’ve seen time and time again, it’s not survivable. It’s a setup: This is the dream, to have the mansion and fancy car and never worry about money, and also, you never get to see sunlight and you don’t get to talk to anyone you know. It’s a deal with the devil.
MAGNUSSEN | This is the show after every Disney movie. Like, after the credits…
MILIOTI | I was saying to someone earlier, it’s literally like The Little Mermaid. He’s like, “I’ll give you legs, but you can’t have a voice and you can never see your family again,” and she’s like, “OK!” Hazel’s desperate to get out. Her life at that point isn’t happy. I love the way in which this show reveals information. It’s one of the things I really like about it. You get to see more in the latter half of the season as to why she was so desperate to escape the life with her dad.

TVLINE | Speaking of, what can you tease about the season’s latter half? It doesn’t seem Byron is going to let her go that easily.
MAGNUSSEN | The latter half is about a couple trying to figure it out. Even though it’s an absurd, crazy world — and the prism of life is definitely tilted a bit through our show — it is two people trying to revive a relationship and figure it out, and see how they can come to an understanding or agreement. 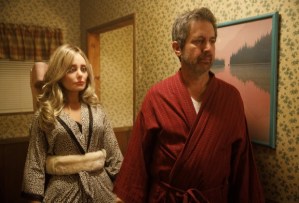 TVLINE | Lastly, how was your experience working with Ray Romano? And of course, his doll of a costar, Diane…
MILIOTI | He exceeded every expectation that I had of what it would be like to work with him and to get to know him, which was already very high. He’s a wonderful human being, an incredible actor, and I’m excited to have people see what he does in this, because I think they haven’t seen this side of him. Something that’s united us all as a cast is that everyone is extremely game, including Ray, including Noma [Dumezweni], Caleb [Foote], Dan [Bakkedahl]… even guest stars who came into this world. This show’s like being shot out of a cannon. But back to Ray, he’s an utter delight.
MAGNUSSEN | I got to cross paths with Ray on the TV show Get Shorty a few years back. I didn’t get to know him well, but I have always admired him. Through this show, I fell in love with the guy. He inspires me, I look up to him, I can take advice from him. You hope to work with such great talented people like Ray and Cristin and Noma and Dan. I think we hit a cast jackpot here because everyone is an absolute delight to work with every day. That doesn’t always happen. Diane’s a little bit of an a–hole, I just want to put out there. She is a piece of s–t! You can quote me on that.