The good news for A Million Little Things‘ Eddie? Things have to go up from here.

The bad news for Ed, who this week admits that he’s been abusing prescription painkillers? There’s no way the path forward will be easy or fun.

But at least Eddie’s lapsed sobriety is out in the open now, thanks to Regina’s discovery that her Vicodin missing. (You’ll recall that Eddie took it when he and Gary were at the Howards’ apartment a few episodes ago.) That sets off a chain of events that lead to Eddie, sweaty and near tears, trying to climb the stairs to Theo’s bedroom using only his upper body strength. As you might guess, it doesn’t go well.

Read on for the highlights of “The Price of Admission.” 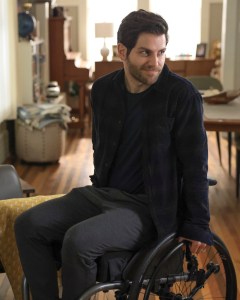 THE TRUTH WILL OUT | At first, Regina fears Rome has taken her pills and is planning another suicide attempt. He assures her he is not, then calls Eddie to see if he knows anything about it. Ed angrily denies stealing the medicine, and Rome apologizes for even asking. But the minute he gets off the phone, he tells Regina, “Eddie took your pills.”

After Gary confirms that Eddie was acting weird the day they borrowed Regina’s arnica gel, the guys go to Katherine and Eddie’s place to confront their friend. Before they show up, however, Theo’s street hockey ball accidentally rolls onto a neighbor’s yard. As Theo retrieves it, the guy yells, “I don’t want that China virus around here.” The incident follows an earlier one where one of Theo’s classmates told him to wear a mask during Zoom school so that other people wouldn’t get sick, and the nasty neighbor is the breaking point for a drugged-up Eddie. He grabs Theo’s hockey stick and bashes in the headlights on the neighbor’s car. But a horrified Theo begs his dad to stop, then runs inside and hides out in his room — which is on the second floor — and won’t come out.

Eddie is filled with shame and determined to talk to his son. So he hoists himself out of his wheelchair and tries to get upstairs… and that’s where Gary and Rome find him. “I need help,” he says.

He admits everything, including that Katherine doesn’t know the truth about what’s been going on with him. Then, while Rome is attending to Theo, Gary physically beats on Eddie a little, angry because they’d all made a pledge to share everything — especially the tough stuff — after Jon’s death. Eddie breaks down, crying, and Gary hugs his friend. (Side note: Nice work by David Giuntoli here.)

Meanwhile, at work, Katherine and Alan bond about growing up Asian-American and the racism they and their families experienced. It’s very collegial, and Katherine is on the verge of text-flirting with her fellow counselor when she comes home and realizes that something is up with her husband. “Dakota didn’t steal my pills,” he tells her. “I’ve been taking them. And now, I can’t stop.”

TYRELL’S REAL DEAL | Regina offers to make dinner for Tyrell and his mother, and she won’t accept any of his excuses when he says she doesn’t need to. But when she stops by the address he gives her, some official-looking types are in the apartment, talking about how they can’t find the teen. He later swings by Someday and apologizes: The truth is, his mother was an undocumented immigrant, and U.S. Immigration and Customs Enforcement took her away. He’s been on his own ever since. So Regina brings him home, sets him up in the room that was meant to be her son’s nursery, then informs Rome that he’s going to stay with them for a while. 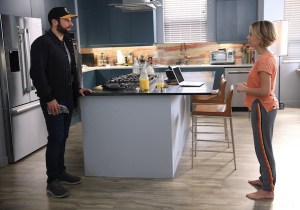 OVER AND OUT | Jamie and Maggie have been friends throughout the pregnancy ordeal, but they go back to being friends with benefits after she returns from her morning run. Soon after, however, Gary shows up at his apartment, having learned about the podcast from Danny, of all people.

Gary and Jamie meet in very awkward fashion, then Gary is a little mean as he makes the situation very clear to Maggie: “I’m over you. I’m so over you.” Later, Darcy shows up! But she wants to talk about a retreat that her therapist suggested, not about the podcast. Maggie confirms that the suggested treatment, which was developed with female combat veterans in mind, is a good thing, and volunteers to be a sounding board whenever Darcy needs one. The moment is really sweet… until Jamie bumbles in and tries to deflect any ill-will by announcing that Darcy really should be mad at him about the podcast. She’s all, “What podcast?”

But it’s all OK, guys! Darcy goes back to Delilah’s house, where Gary breathlessly tells her he once wanted to marry Maggie but doesn’t anymore. She points out they both have pasts — she has an ex-husband and a son, after all — and that she wants to focus on their future. Then, they exchange “I love yous” and sneak off for a little pantry sex.