Riverdale capped off its spring run with Hiram hatching yet another evil plan to destroy the town… and several characters got caught in the crossfire.

Wednesday’s midseason finale — Season 5 is set to resume on July 7, so mark your calendars — kicks off with Hiram explaining his latest plot to Reggie: He’s been mining for a precious metal called palladium (more valuable than gold!) and thinks there’s a lot of it lying beneath the Blossom family maple groves. Reggie sweet-talks Nana Rose into selling the groves to him, but Cheryl glides in to tell Hiram that Nana Rose is legally senile and her signature means nothing. So Hiram swiftly moves to Phase Two: He blows a hole in the prison walls and sets all the prisoners free, while Reggie sets Cheryl’s maple groves ablaze. 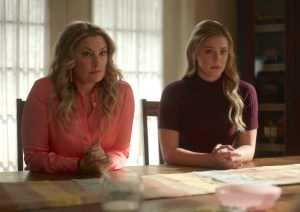 The prison escape lands right on Betty and Alice’s doorstep, with both Charles (!) and Chic (!!) showing up to say hi. (No one’s ever really off this show for good, are they?) They all sit down for an uncomfortable family dinner, where Charles declares that he and Chic want to be married, with Alice performing the ceremony. Congratulations…? Meanwhile, it’s Parent-Teacher Night at Riverdale High, and Archie and Kevin are giving the parents a tour when the power goes out. Soon, prisoners are streaming in, and Archie ends up taking out a number of baddies like a redheaded John McClane, freeing the innocent bystanders and saving the day. His Uncle Frank later tells him Hiram is paying prisoners to trash the town. (Of course.)

Penelope Blossom shows up at Thorn Hill and tells Cheryl and Nana Rose about the fire, and they all pray together for the wind to keep the blaze away from Thorn Hill. And it works! The house is spared. Plus, Betty’s FBI boyfriend Glen makes the mistake of going to Betty’s, and Charles pulls a gun on him and suggests a game of Pincushion Man. The youngest family member gets to stick a “pin” in Glen, he says, as he hands nine-year-old Juniper a huge butcher knife. Betty doesn’t want the girl to lose her innocence, so she takes Juniper’s place and stabs Glen in the gut. But she also throws the knife at Chic while Alice and Charles tussle. The gun goes off, and Charles is hit. Glen only suffered a flesh wound, Charles is in ICU, and Betty decides to take Polly’s case into her own hands: She dresses up like a trucker and gets behind the wheel of her own big rig before hitting the road. 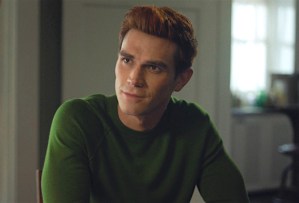 Elsewhere in “The Pincushion Man”: Archie learned that his Army sergeant may have sent him on a “dirty mission” and confronted him about a cover-up, and the sergeant threatened to set him up as a scapegoat; Veronica tried to get Chad to sign divorce papers, but instead found out he’s been using her jewelry store as a front for some shady investments, so she needs to stay married to him just to stay out of jail; Toni was totally MIA, since she’s on bed rest due to her pregnancy; and Jughead took psychedelic “maple mushrooms” to find inspiration for his book and hallucinated a steamy reunion with Betty… but when Tabitha checked on him, she found him missing, with only a trail of blood left behind. See you in July!