After Archie’s squad endures yet another shutout loss in front of empty bleachers and unenthused cheerleaders, Veronica — who calls herself the “de facto team owner”? — offers a cool ten grand to the first player who scores this season. (She also motivates Archie with a kiss.) Tabitha agrees to host a pancake breakfast for the team at Pop’s, but Cheryl won’t donate her family’s syrup. In fact, the team is so terrible that she wants to pull her cheer squad out, but she agrees to stay for one more game… and she’ll come out of retirement and put on her old cheerleader outfit, too. 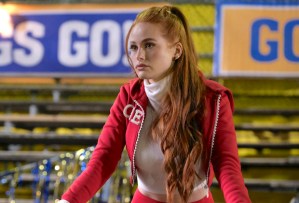 Cheryl comes through with the syrup at the pancake breakfast, but Reggie spoils the mood by saying the rest of the league wants Riverdale High to withdraw. (He calls everyone a “loser” on the way out, for good measure.) Veronica goes to Hiram and offers him a bet: If his school Stonewall shuts out Riverdale, they’ll withdraw, but if they score, they can stay. Hiram agrees… but then Stonewall swoops in and gets Riverdale’s best player to transfer to them before the game. (Sneaky!) So Veronica brings in a pro football star named T-Dub to give the team a rousing pep talk, along with some fresh recruits. Hiram wants Reggie to sabotage the Riverdale squad — and when he refuses, Hiram kicks him out and takes over as Stonewall’s coach.

It’s game night, and Cheryl puts on a peppy song-and-dance number to Lady Gaga’s “Stupid Love” in a tight red tracksuit — that says “HBIC,” of course. Stonewall is stomping Riverdale easily, but we knew that would happen. The question is: Will Riverdale score before time runs out? It comes down to the final minute, and Archie rallies the troops with a rah-rah speech: “If you don’t give up on yourself, you cannot lose.” It’s not quite Coach Taylor, but it works: Britta the girl player runs for a touchdown just as time expires. Yay, they only lost 52-7! The team can stay in the league, at least. 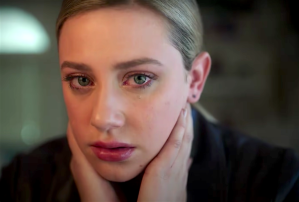 Meanwhile, Betty is having a rough week: Alice is catatonic, drunk on wine and convinced that Polly is dead. When Glen calls with the news that the blood they found matches Polly’s rare blood type, Betty lashes out at him for not helping — and lies to her mom, telling her the blood didn’t match Polly’s. Betty tells Jughead the truth, though, and he puts her in touch with that old coot from a few weeks back, who thinks Polly must’ve been abducted by the mothmen on the “Lonely Highway.” Betty’s not a believer, though: She loads her gun and heads to the truck stop, pulling girls out of trucks and beating up truckers to get information. She takes one of them hostage, even pointing the gun at his head and nearly pulling the trigger before getting a last-second phone call from Jughead. 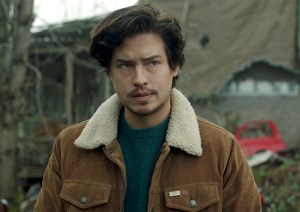 You see, Jughead has a troubled student named Lerman, who turned in a vivid story about aliens and monsters. Jughead was concerned the kid might be a victim of abuse, but when he asked Lerman about it, his parents complained and pulled him out of Jughead’s class. Lerman ends up going missing, and that’s why Jughead called Betty, to ask for help finding him. She tracks him down on the Lonely Highway, and the kid asks: “Did it happen again?” His parents explain that he’s a sleepwalker, and hurts himself a lot. He even went missing for a full week once, and was found on the Lonely Highway. So is he an abductee, too? Soon enough, though, Lerman’s parents move him out of Riverdale — and Glen shows up at Betty’s door, spilling the beans to Alice that Betty lied to her about Polly and announcing that he’s now taking over Polly’s case.

Plus, Kevin finally got a storyline, but it was a sad one: Fresh off his breakup with Fangs, he bristled at Cheryl’s attempt at couples therapy, and then got beat up in a steam room during a sexual encounter gone wrong. Later, he admitted to his dad that he’s ashamed of being gay, tracing it back to insecurity caused by an offhand remark made by his mother. Oh, Kevin… we want you to get more screen time, but not like this!