Riverdale went all Ice Storm on us this week, with Cheryl throwing an anything-goes key party at Thorn Hill. But did it unlock Archie and Betty’s big secret?

While Archie is dressing up in his fireman’s get-up for Betty in the bedroom (sans shirt, of course), Kevin is sneaking off for trysts with truck drivers and not telling Fangs — and Veronica is ignoring messages from her husband Chad and telling Archie she needs “big changes” in her life. (Hint, hint.) Kevin and Fangs announce to the gang they’re engaged, and having a baby — Toni’s baby, actually. The three of them are going to raise the baby together… and Cheryl is livid. She calms down, though, when Toni explains that she has a medical condition that means the earlier in life she has a baby, the better. Toni even tries to leave the door open for a reconciliation, but Cheryl firmly shuts her down: “I don’t see how that’s possible anymore.” Ouch. 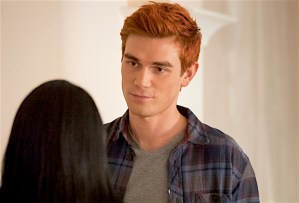 Cheryl complains to the art dealer Minerva about Toni’s irritating happiness, and Minerva encourages her to “throw a little chaos at it,” in Cheryl’s inimitable words. So Miss Bombshell offers to throw Toni, Kevin and Fangs a party — only it’s a key party, a free-wheeling round of “sexual switcheroo.” After Ronnie hears from Katy Keene that Chad has been seen around town with another girl, she’s more than ready to switch things up. And though he’s hooking up with Betty, Archie admits to his Army pal Jackson that he still has lingering feelings for Veronica. Hmmm… sounds chaotic to us.

At the party, Cheryl collects everyone’s keys in a glass bowl while Archie has an awkward “bro to bro” chat with Chad. Plus, Fangs brings one of his old hookups along, at Kevin’s insistence… and it’s the same trucker who Kevin’s been hooking up with. After Cheryl lays down the ground rules — when you pick someone’s key, you go off together and do whatever you want, consensually — Veronica’s the first to pick, and she picks Archie’s key, of course. Chad stops her, though, and he and Ronnie end up leaving in a huff. Then a very drunk Jughead picks Tabitha’s keys, and she just takes him home. But the debauchery picks up steam when Jackson pairs off with Minerva, and Reggie pairs off with… Fangs? (OK, then.) Kevin gets his truck crush, and Betty gets Archie, leaving just “Choni” as the last two singles. 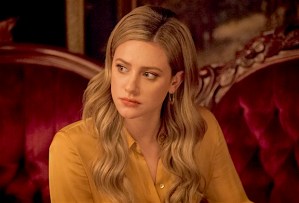 Now that she has her alone, Cheryl tries to give Toni a gift — a nursery for her new baby at Thorn Hill — but Toni calls her a “master manipulator” and cuts her off entirely. Kevin and Fangs end up back at home (“Turns out Reggie is one hundred percent straight”), and Kevin confesses he’s not ready to get married. Archie and Betty go back to her bedroom, but he admits he still has feeling for Ronnie. Betty understands, and she doesn’t “want my darkness to overtake you,” so they agree to just be friends. (We can hear the boos from the “Barchie” crowd from here.) Meanwhile, Minerva makes a move on Cheryl, and Veronica shows up just as Archie is soaping up his fire truck. (No, that’s not a metaphor.) She tells him she and Chad are getting divorced, he tells her about him and Betty, but that’s done now… and they share a kiss. (We can hear the cheers from the “Varchie” crowd from here.) 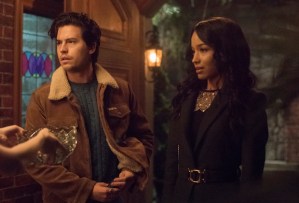 Elsewhere in “Lock and Key”: After his close encounter, Jughead is still seeing aliens everywhere he looks and joined a support group for fellow E.T. believers, revealing to Tabitha that he’s blacked out once before (what’s he suppressing?); Alice got a phone call from someone saying she’s Polly, and Betty was skeptical, but then Betty got a call from her, too, and they followed her call to a smashed phone booth covered in blood. (And did Polly say, “They’re coming”? Did the aliens get her, too?)