In his ongoing quest to be as hot as possible, Archie became a firefighter this week on Riverdale… but a long-awaited reunion really brought the heat.

After a pair of fire extinguishers keep Archie’s house from going up in flames, it’s clear Hiram is behind a rash of arsons in town, and Archie has a new mission: He wants to restart Riverdale’s dormant fire department. His grandfather was a fireman, and he decides they can operate out of his boxing gym. Plus, his old Army buddy Jackson shows up at his door, so Archie teams him up with his ROTC kids and starts training his new crew to battle blazes. Archie runs into a burning building to save a homeless guy and ends up in a hospital bed, and when the homeless guy dies, Jackson grabs a rifle, intending to punish Hiram for his many sins. Archie talks him down, though, and puts Jackson in charge of the new fire department, with the help of the town’s old fire chief and a shiny new fire truck from Veronica. (They’ll pay for it with a calendar of shirtless firemen.) 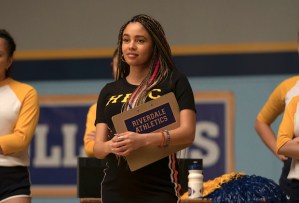 Meanwhile, when Toni is busy coaching the River Vixens, Cheryl struts in: “As Elton John likes to say, the bitch is back in town.” She challenges her ex to a dance-off for custody of the cheer squad — and since Toni is pregnant, a peppy Vixen steps in for her. Many gyrations later, they both win the support of the team, and Cheryl and Toni agree to share custody. Cheryl swiftly takes over, of course, and Toni isn’t loving her bossy tone. She cancels practice and confronts Cheryl about her air of privilege and nasty attitude, calling her “selfish” to boot. Hmmm… looks like we’ll have to keep waiting for a full “Choni” reunion, huh?

Plus, Betty’s search for her sister Polly continues, and she investigates the identity of a Jane Doe they found in a swamp. Hiram won’t let them search his property, but Reggie lets it slip that another body was found in the swamp: a girl named Margaret Harper, who went missing three years ago. He also talks Hiram into letting the Coopers search for Polly, and with the help of Sheriff Keller and Toni, Betty realizes the true count of missing girls is more like (yikes) 21. Another serial killer on the loose? Yeah, this is Riverdale, so that does make sense. 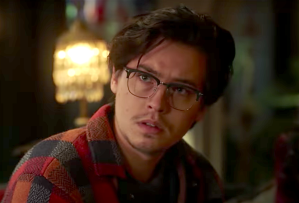 Elsewhere in “Fire in the Sky”: Jughead got a big break in the Mothmen mystery when Nana Rose gave him what she believes is an alien corpse (!) preserved in a maple syrup barrel, and he had a close encounter of his own, too, after which the alien corpse mysteriously vanished; Veronica put her economics students to work developing a new currency called “Riverdollars” to support local businesses, until Hiram flooded the market with counterfeit bills; Betty’s FBI boyfriend Glen called to tell her the Trash Bag Killer is back out there claiming new victims; Minerva Marble now knows the painting she bought from Cheryl is a forgery and threatened to call the authorities; and with all this going on, we didn’t get any steamy Archie/Betty love scenes this week. Sigh.