In Wednesday’s season finale of Resident Alien, Harry was forced to finally decide whether to carry out his initial plan of destroying mankind. With his device intact and ready to annihilate, Harry’s blips of humanity tugged at his heartstrings, and thanks in part to a plea from Asta, Harry opted to leave Earth just as he found it. But after blasting off into space, he discovered little Max tucked away in his spaceship cabin. Looks like Harry just booked a flight back to Colorado, after all.

Below, TVLine talks to Resident Alien creator/EP Chris Sheridan about that heartfelt finale, including Harry and Asta’s friendship, the “broken and struggling” D’Arcy, and of course, his hopes and ideas for Season 2.

TVLINE | First of all, congratulations on the Season 2 renewal!
CHRIS SHERIDAN | Thank you! I knew the show was doing well, but it’s always nice to get confirmation. The cast was beyond thrilled to find out it was coming back.

TVLINE | In the finale, Asta convinces Harry to not use the device, using their friendship and connection as her argument. Is Harry afraid of using it because he knows it could kill him, too? Or was it really just Asta’s plea that swayed him?
SHERIDAN | I think it’s love for Asta. At the very end, he has a plan. He could do it and survive. His plan is to get up in the ship, drop [the device] and take off. He’ll be fine and everyone will be wiped out. There’s a friendship love story between Asta and Harry [about] two people who, through getting to know each other and slowly gaining trust with one another, are able to bring their walls down a little bit. For the first time in Episode 10, he starts to realize what love is all about, and these feelings, this closeness he has towards Asta as a friend, are starting to creep into him. He’s going through all of the emotions we go through when someone we care about rejects us. I think he feels close enough to Asta at the end that he would still love to kill everybody. But if it means killing her, then he just can’t bring himself to do it.

TVLINE | I might be a total pessimist here, but if I was trying to convince an alien to not kill mankind, I would probably tell it exactly what I think it wants to hear. Is Asta really OK with everything that’s transpired, or is she still secretly conflicted about Harry?
SHERIDAN | That’s very astute. I think you’re exactly right. I think it’s both. Look, I think she cares about him. In the moment, yeah, this guy killed this [then]-innocent guy Harry Vanderspeigel, and that’s horrible. She’s getting drawn into this alien that looks human and maybe is human, and realizes, “Oh no, this is a monster. What am I doing? I can’t be friends with this person.” There is part of her that sees that he’s changed, but she’s also very well aware that she’s got to stop him from doing this. I don’t think she’s being manipulative. I think there is honesty in what she says to him, but at the same time, she is doing everything she can to keep him from killing everybody. I would put it at 60/40 — because I’m less of a pessimist than you, Nick — that she does truly believe he can change and is a different person than he was when he first got here. 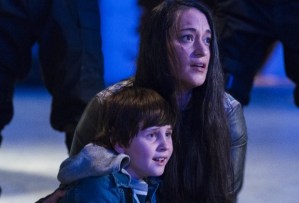 TVLINE | I can get behind those odds! We also learned that the real Harry killed Sam Hodges. Come Season 2, will that information come to light? And will we find out a motive?
SHERIDAN | It’s a good question. When I first set out to adapt this book into a TV show, my concept was to have two different stories going through the series. One is the alien storyline of Harry coming down to kill everybody and slowly becoming human. But I also wanted a town story going through this world as well, where even if there was no alien, you’d want to watch the show anyway [for] the three-dimensional characters, and Asta and D’Arcy’s relationship, and Asta’s bad marriage with Jimmy, and the baby. To me, the town story in the first season was, “Who killed Sam Hodges?” And I always thought that, in the second season, the town story would be: “Why?” What we will discover in the second season is what was going on with the real Harry Vanderspeigel. Why did he leave New York? What was the relationship between the real Harry and people in town, and what led him to kill Sam.

TVLINE | Poor D’Arcy seems so lost in the finale. What’s in store for her next season?
SHERIDAN | I’m actually going to spend some time talking to Alice Wetterlund about the character. We spent some time last season talking about this wonderful, broken human being that Alice plays so incredibly well. D’Arcy’s a small-town hero who went and made something of herself at the Olympics, and was revered by everybody. But what is it like to be that person and flame out— only to end up back where you started? I think D’Arcy is at this turning point in her life where she feels she could’ve been something and could’ve been happy if things went a certain way, but things didn’t go that way and she’s sort of given up. She has to figure out what her life is and what her true happiness is. As she says to Ben, she just wants to matter, like we all do. She wants to be important and when she finally leaves this earth, she wants to leave having done something. 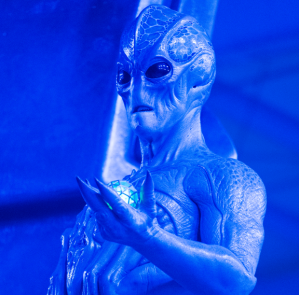 TVLINE | “True strength comes from choosing not to kill. Maybe being truly human is about choosing to love instead.” That line is so poignant for today. Would you say that’s the series’ primary theme?
SHERIDAN | All the messages I wanted to put out there revolve around the thought of love and acceptance and connection… taking care of each other and not fighting each other. Harry came down to this planet with a concept in his head of what he thought he knew about humans — and to be honest, it’s what a lot of us think about each other. It’s this pessimistic view [of] me or them. It wasn’t until Harry got here and made these friendships where he started the journey into realizing that there’s more to humans, and when humans work together there’s nothing they can’t do.

TVLINE | Wrapping up, are there any other teases you can share about next season? Please tell me you’ve figured out another way to have Corey Reynolds sing again?
SHERIDAN | [Laughs] Oh, he’s amazing. He’s a Broadway singer. He’s incredible. My fear was that he was going to be too good of a singer for a small-town sheriff, but I would like to explore his singing some more. A sheriff that sings like that, there’s a backstory there somewhere. Maybe that was his passion growing up and he didn’t do it because his dad and his grandfather were cops? We’re going to get into Mike’s backstory more. What was really the reason he brought his dad to Colorado? There’s something that happened to him in D.C. as a cop that made him run. Everyone in Patience is running from something. I want to explore that a bit more and make his character a little more three dimensional, where he’s not just searching for the murderer.

I’d also love to be able to have Terry O’Quinn back. Maybe that storyline’s not done. He’s searching for something and it’s possible the only one who has the answers is Harry Vanderspeigle. I’m just at the beginning stages now of trying to figure out the next season. I have some cool ideas, so I’m excited to get into it.

What did you think of the Resident Alien finale? Grade the episode and season below, then sound off in the Comments!