Moments after extinguishing Tina Burner on the main stage, Utica Queen returned to the werkroom on Friday’s episode of RuPaul’s Drag Race — but not everyone was in a condragulatory mood.

While Rosé was quick to compliment Utica on a lip well synced, Kandy Muse refused to acknowledge her victory at all — at least to Utica’s face. “I’m not going to sit here and tell you, ‘Oh, girl, you slayed the lip sync when I don’t think you did,” Kandy said in a confessional. “I thought Tina slayed that f–ing lip sync.” Meanwhile, Utica wondered aloud whether she might be the new Season 13 lip sync assassin. (Uh, let’s not get ahead of ourselves now.)

“Maybe next time, it’ll be a triple win.” Kandy suggested, still dressed in the laziest costume to hit the runway since LaLa Ri’s gift-bag couture. But the jokes about Kandy end here and now, because she entered Week 12 determined to win. And she finally did. Twice.

Her first win, which she shared with Rosé, came via this week’s mini challenge, which tasked the queens with starring in their own live makeup tutorial for the perfect glam selfie. The catch? They had to do it in pairs, with one person serving as the face while the other provided the arms from behind. Watch all that Muppet Show madness go down in the video below:

As this week’s mini challenge winners, Kandy and Rosé got to choose the run of show for Drag Race‘s first-ever “Nice Girls Roast,” which brought back three iconic Miss Congenialities of yester-queer: Heidi N. Closet, Nina West, and the perfect, the beautiful, the Linda Evangelista-esque… Valentina! Both winners wanted to snag the opening spot, which ultimately went to Kandy, leaving Rosé committed to wrapping things up as the final act of the night.

Here’s a breakdown of the good, the bad and (most of all) the ugly moments from Friday’s Nice Girls Roast, in order of appearance:

KANDY MUSE | Stepping up to the podium with sexy hair and a cinched waist, Kandy set the bar high with rapid-fire jokes that had the judges wetting their Depends for the duration. My personal favorite lines included Kandy telling Valentina that her Angel in Rent Live “needed an angel,” as well as her contribution to the ever-growing library of jokes about Ru’s age: “RuPaul is so old, I told her to act her age… and she died.” 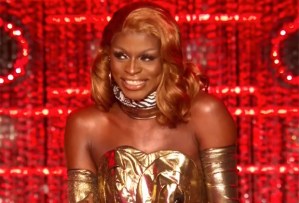 SYMONE | Having never witnessed a comedy roast before (“The only roasts I’ve seen are in my mother’s crock pot”), Symone was nervous about this challenge, but I was confident that she would turn it out in the end… until it became very clear that she would not be doing that. Even Nina had to admit, “Symone is bombing. It’s like time stops. Time is stopping right now!” At least Heidi was nice enough to say, “I wish her jokes were as good as she looks.” There’s that Miss Congeniality spirit!

UTICA QUEEN | It’s a good thing Clara the Cow wasn’t around to see this tragedy unfold. After opening with a successful dig at Symone for bombing her set, Utica proceeded to also bomb. Even harder, in fact. Look, did I cackle at her “Symone and Pumbaa” line to Ross Mathews? Yes. But I was right there with the rest of you crickets when she thought Nina could “speak whale,” and when she described Heidi as “gap-toothed and full of bull semen.” It was just weird. And mean. And not funny.

OLIVIA LUX | This was another bomb. It wasn’t quite as disastrous as Symone’s or Utica’s, but it wasn’t good. And what was up with that weird little girl character she chose to play? I will say, I enjoyed her joke about Ru (“She’s so old, she signed the Declaration of Independence as a parent-slash-guardian”), but it was a brief flicker of a bright spot in an otherwise dark set. 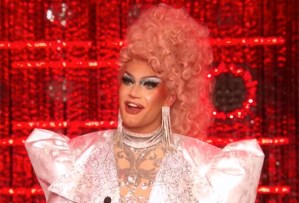 ROSE | Going last may have been a risk, but it was one that paid off for Rosé. Her jokes about Valentina being delusional, Nina having big shoulders and Heidi trying to sleep with her (“Lies!”) were funny enough to maintain momentum — and damn near hysterical when compared to the non-jokes some her previous roasters attempted to serve.

Kandy’s win was a foregone (and well-deserved) conclusion, as was Utica and Symone landing in the bottom two. “One-note” Olivia was certainly a contender, but she was ultimately sent to safety, which left Utica and Symone battling to the tune of Ariana Grande’s “No Tears Left to Cry.” (A bop!)

As usual, Utica just sort of Betty Spaghetti’d her way around the stage, while Symone opted for a more nuanced performance. The subtle motions, the characterization, the drama!

In the end, Utica did not live up to her self-appointed title of lip sync assassin. She was sent sashaying away, while Symone returned to drag another day. Your thoughts on those results? Weigh in via our poll below, then drop a comment with your full review.