A flat performance in a soda-themed challenge got another competitor canned on Friday’s Drag Race, leaving us with but a six-pack of queens.

Following an arousing — sorry, make that a rousing — game of Are You Smarter Than the Pit Crew?, which challenged the queens’ knowledge of Drag Race institutions like Lil’ Poundcake and the Interior Illusions Lounge, the group was presented with this week’s maxi challenge: to create and brand a soft drink, design the can, produce and star in a commercial, and write a catchy jingle. You know, totally normal things that all drag queens do in their day-to-day lives.

In a surprising turn of events, some of the night’s worst commercials came from some of the season’s supposed frontrunners. Let’s start with Tina Burner, whose “Viagra in a can” called Burnin’ Up (she will be hearing from the Jonas Brothers’ lawyers, by the way!) was a surprise flop, especially considering how consistently she’s performed until now. Watching her struggle to nail that line about Victoria’s Secret, I couldn’t help but flash back to Kahmora Hall’s iconic performance as a tree. (“I was ROOTING… for US!”)

Other missteps included Gottmik’s confusing sex juice commercial, which even she admitted made no sense; Utica Queen’s uncomfortable teat suckling, a tribute to her childhood cow Clara, the same one mentioned by that medium last week; and Olivia Lux’s overall directionless performance. Carson Kressley and Ross Mathews didn’t need to tell her to look confused — she took care of that herself. 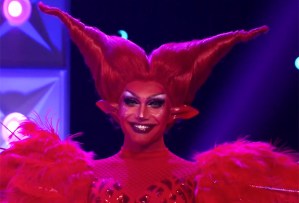 That said, sometimes the top performers are exactly the ones you expect, like Symone and Rosé, who ended up sharing this week’s win. Both took direction very well while filming their commercials, maintaining a natural humor throughout. Symone looking at the camera and asking “Is your blood sugar low?” was a moment in itself.

In fact, Symone probably could have been the sole winner of this week’s challenge, had it not been for Rosé’s devilishly stunning “Beast Couture” runway look (pictured here). Seriously, The CW should call her up to consult on HIM‘s makeup for the live-action Powerpuff Girls show. Symone’s foxy look was a hysterical stroke of brilliance, especially in its styling, but it just didn’t have the same wow factor as Rosé’s.

Check out the rest of this week’s runway — including Utica’s tribute to Maleficent, Kandy Muse’s lazy alien outfit, and Tina looking like a gay version of Barf from Space Balls — below:

Whose beastly lewk was a beauty in your eyes? 👀 #DragRace pic.twitter.com/riEcjAghHu

Given the quality of her commercial and her tepid reception on the runway, Utica was a udder-ly destined for this week’s bottom two. But it was a bit of a surprise to see Tina lip syncing alongside her, especially when some queens (*cough* Kandy *cough*) appeared to have put in far less effort. Still, if ever there was a perfect battle to be rocking a giant dog suit, it was this one, set to Black Eyed Peas’ “My Humps.” The sheer ridiculousness of Tina twerking in that oversized costume sent Ru into hysterics, while Utica was stuck doing a way-too-serious interpretation in her constricting gown.

Your thoughts on this week’s winners, losers and everyone in between? Vote for the queen you would have canned below, then drop a comment.