Whether lacing up against the peewee league’s elite Hawks, Team Iceland at the Junior Goodwill Games or Eden Hall’s dominant varsity team, The Mighty Ducks built a lasting legacy as the scrappy underdogs who play the game fairly and still end up on top.

The Mighty Ducks: Game Changers (premiering Friday, March 26) flips the script on the iconic team, who are now the bad guys in the Disney+ series created by Steve Brill (who wrote all three films). Now a powerhouse organization led by Coach T (The Descendants’ Dylan Playfair), the Ducks operate under a cutthroat ideology in which winning is everything. In short, they have thrived long enough to see themselves become the villains of the story.

Enter the Don’t Bothers, a new ragtag crew formed when 12-year-old Evan (Boardwalk Empire’s Brady Noon) gets cut from the Ducks. With help from his mom Alex (Gilmore Girls’ Lauren Graham), Evan starts a team to challenge the Ducks’ exhaustive win-at-all costs mentality. The series captures the spirit of the OG films through this new motley crew, who are not exactly all-star caliber but still have plenty of heart.

There’s Sam (De’Jon Watts), a daredevil skateboarder who joins on a dare; Maya (Taegen Burns), an acid-tonged Queen B who ditches her fellow mean girls to play; Lauren (Bella Higginbotham), an offbeat fantasy-loving cosplayer; Koob (Kasra Wong), a sheltered gamer whose button-mashing skills haven’t yet translated to reality; Logan (Kiefer O’Reilly), the new kid in town who looks the part but has no discernable hockey skills; and Nick (Maxwell Simkins), the witty podcaster-turned-hockey player who’s all charm and no athletic ability (and one to watch!). 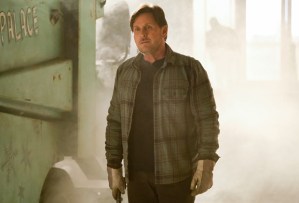 Like the OG Ducks, the Don’t Bothers lack the skills and the proper equipment to be serious competitors. They also don’t have Coach Bombay (Emilio Estevez) to guide them, leaving the squad at an even bigger disadvantage than their film counterparts. In the first three episodes screened for critics, we meet a Gordon Bombay who’s been broken down by life and hates all things hockey. He’s eating leftover birthday cake and can barely keep the Ice Palace (which he inherited from his mentor Hans) afloat. But even in this sad state, Estevez is still likable as the down-on-his-luck former coach. He’s a curmudgeon comedic relief and a nice balance to Graham’s earnest and equally funny mom/newbie coach. Estevez and Graham are a dynamic on-screen pair, and Alex and Bombay’s reluctant partnership serves up plenty of laughs.

Given that this is a small-screen continuation of a beloved film franchise, the comparisons to Cobra Kai are inevitable. Both excel at finding interesting ways to tell a familiar story, and they also pass the torch to an exciting crop of new characters. But whereas the Netflix series focuses on Johnny and Danny’s continued rivalry, Game Changers positions the story around its young hopefuls while the adults fill the supportive roles. It’s an inspirational story about a bunch of good kids (including Sway Bhatia’s delightful overachiever Sofi) learning to believe in themselves, even as the odds are stacked against them. And yes, there are plenty of Easter eggs — and even some cameos — but in the first few episodes, the series never feels like it’s drowning in nostalgia.

THE TVLINE BOTTOM LINE: The Mighty Ducks: Game Changers is a feel-good show that dutifully honors the past, doesn’t reinvent the wheel, and delivers the comforting optimism we’re all craving right now.