And then there were three… or maybe more?

Wednesday’s The Masked Singer revealed that Russian Doll has been hiding yet another performer in its many layers, bringing out a third costumed singer to join what previously seemed like a two-person act.

“Just how many people are in this costume?” guest host Niecy Nash asked, speaking for all of us. If you’ve been following along with TVLine’s guesses, you’ll know that the addition of a third Russian Doll fits right in with our current theory on who’s inside those giant, shellacked heads.

So let’s get to the performances, so we can hash out who’s still left in the running (and so we can talk about that first wildcard contestant, too)!

RUSSIAN DOLLS | The third member of Russian Dolls joined after the first two had already started singing Sean Mendes’ “Wonder,” and the three-part harmony was gorgeous. Much of the clues package focused on how one of the Dolls underwent a health crisis in the recent past, and how that event reunified the Dolls. Other clues included: HELP spelled out in blocks, with the E on an angle; a banjo with three strings; a solar system mobile; a varsity jacket with an M on it; and a fire and rescue truck. Also of note: Though Russian Dolls’ first performance featured one big doll and one smaller one, this one featured two smaller ones. And, as Cluedle-Doo showed us, there may be a fourth Russian Doll waiting in the wings? (My guess: Taylor, Zac and Isaac Hanson, aka the band Hanson. After all, there is another Hanson brother: Mac Hanson, who’s not in Hanson but has his own band.) 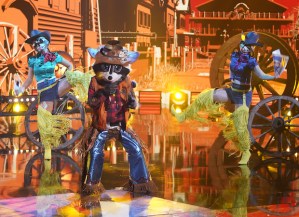 RACCOON | I hesitate to call what Raccoon did in this episode a “performance.” It was more a “screaming some of the words of Johnny Cash’s ‘Ring of Fire,’ off-rhythm, in between bouts of declaring his love for judge Jenny McCarthy Wahlberg.” When guest judge Joel McHale referenced Mickey Rourke’s Masked stint, he wasn’t far off. Clues included: a coffee grinder, references to his past as a boxer, a train, and mentions of a career that started when he was asked to train a Hollywood leading man until eventually “I was the leading man.” (My guess: actor Gary Busey.)

ROBOPINE | It annoys me to no end that I feel like I’ve heard Robopine’s voice before, and he’s giving us really concrete clues, yet I cannot figure out who he is. His cover of John Legend’s “All of Me” was so delicious — and it made judge Nicole Scherzinger cry! — but his voice seems so much younger to me than all of his hints about being 60-plus years old would indicate. Arrgh! Other clues included: an hourglass, references to a childhood in Costa Rica, police lights, a lightning bolt, a cat and mouse, and a spider and its web. (My guess: Is it The Fast and the Furious’ Tyrese Gibson, and he’s just messing with us?)

SEASHELL | After this week’s clue package, I’m pretty sure I know who’s inside the shell. Her performance of Demi Lovato’s “Confident” was killer — the woman can sing! — and her clue about a “total jock” who gave her courage to do things she thought she couldn’t tracks with what I know about my guess’ romantic history. Other clues included: bagels, eggs, milk, a camera, a dog, running and a stopwatch reading 2:00. (My guess: “Baby It’s You” singer JoJo, who dated a soccer player named Freddy Adu for a while.) 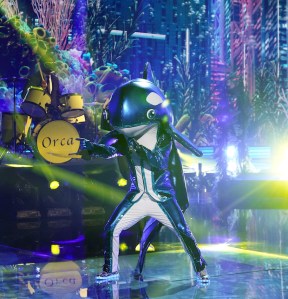 ORCA | And now it’s time for the wildcard! Orca nailed a strong performance of Twisted Sister’s “We’re Not Gonna Take It” — I feared he’d get all screamy, but it was fun and rowdy without ever being off-pitch. His clues included references to weird-flavored pizzas (lemon, orange, pumpkin), 2:59, mention of hiding audition tapes in the pizza boxes he used to deliver, candy, a hawk, 1313 Melville Court, and a mention of achieving his wildest dreams “at the 11th hour, boom.” (My guess: no clue yet.)

THE UNMASKING | Raccoon was unmasked, and he was revealed to be Danny Trejo (The Flash, American Gods, nearly every other TV show at one time or another).

Now it’s your turn. What did you think of the episode? What are your latest guesses? Watch Raccoon’s unmasking below, then hit the comments and let us know!