People all over the world reacted viscerally to George Floyd’s killing at the hands of the police.

But for Black men, the May 2020 camera-phone footage proved especially triggering, particularly for those who had survived similar incidents of over-policing and brutality. On Tuesday’s installment of Queen Sugar, fans saw this angle explored through the eyes of Micah (Nicholas Ashe) because the police profiled, harassed and arrested him in Season 2.

At first, Micah cries upon seeing the news of Floyd’s death. And then his heartbreak gives way to frustration and rage, as he throws his remote control on the floor and smashes it to pieces.

“He’s been there. He’s lived it,” Ashe tells TVLine. “I think for a long time, Micah felt like something had happened to him that was bigger than him, and he couldn’t articulate it at all.”

“But now, Micah is a college student,” the actor and activist adds. “He’s kind of gotten out in the world, and he can walk the walk he talked about walking, as far as activism and protesting. Now he’s on the inside and wants to dismantle it a little bit more. Dismantle the system at large, but also dismantle the police brutality that happened to him and navigate out of that trauma.”

The episode, titled “May 27, 2020,” also allowed Micah and his mom Charley to debate the best way to dismantle systemic racism and police brutality. Charley argues that you cannot match hate with hate or destroy property. But Micah prefers the “by any means necessary” way of thinking and says he and his friends and fellow protestors will do whatever it takes to facilitate actual change. 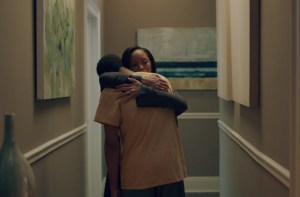 “Queen Sugar is so intense. We’re yelling at each other, we’re crying at each other, but there is always that bounce back, always because we’re a family,” Ashe says of the scene. “So much of working on this show has mirrored my experiences with me becoming more familiar with my history and the culture of people who look and live like me.”

“As Micah was learning about that, I was learning about that,” Ashe reveals. “And I find that there is a rift between people who were born in 1990 and later, and people who were born before 1985. This is a general statement, but the way 20-year-olds and 40-plus people navigate protesting, and what that should and should not look like, exists off the page. People really think there is a better way to do things. But there hasn’t been any real structure for what the baton is, how my generation should receive that baton, and which direction we should run. There’s just been a lot of criticism of what’s been happening, and Micah is just exasperated at that point. He’s like, ‘If this is not the way, show me how, and I’ll do that until the wheels fall off.’ We don’t have answers, and Micah needs a place to put all of this. If it lives inside of him, he’s a danger onto himself.”

The episode’s director, Cierra Glaude, suggested that Ashe do yoga to show how Micah would steady himself that day. But Ashe, who works out avidly, insisted that Micah lift weights and sweat it out while planning a protest. 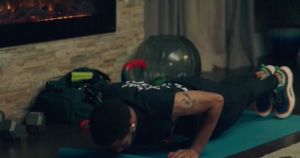 “Micah is ready for war,” Ashe says. “I said, ‘Get some weights in here, and he can do push-ups and stuff.’ After the 10th take, I was like, ‘Um, maybe my ass should’ve done some yoga. All these damn push-ups.’ But with Queen Sugar, we are nothing if not subtle and clever. We’re going to see a lot of shows try and chronicle the coronavirus pandemic and what last summer meant.”

“Queen Sugar is doing more than that,” he adds. “This episode is not the Black Lives Matter episode. Queen Sugar is the Black Lives Matter show. Every episode is showing all of our community and its beauty and its ugliness and its trauma and magic, and that’s why we can deal with this patiently. This is not the Roseanne special, where everybody is sitting around talking about the Black people that moved in next door.”

Tackling the Black Lives Matter movement and the racial reckoning that followed in 2020 is heavy stuff. While there aren’t a lot of moments of levity between Micah and Charley, the episode does allow room for Nova and Ralph Angel to create humorous moments within their pandemic pods.

“With Nova and Calvin, she was being so mean to that poor white man,” Ashe says with a chuckle. “She was chewing angrily and going off on the daughter after the girl slaved over the stove. That took me out. But I needed the laugh. This episode can make you feel a little bit suffocated. A lot of the comments have been fans saying they didn’t know if they were ready to relive the summer of 2020. I just want to encourage viewers that within Season 5, there are moments of levity and parts that navigate outside of the heaviness. There is another moment where Ralph Angel calls that racist white man a punk ass, and that’s another moment to breathe.” 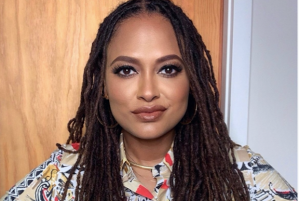 Queen Sugar creator and EP Ava DuVernay says once the pandemic hit, she and showrunner Anthony Sparks scrapped the original Season 5 scripts in favor of making all 10 episodes about 2020 and how last year looked for Black Americans. As a result, Ashe and his co-stars, who were quarantined in pods with their scene partners, had no idea how the current season would play out.

“We didn’t get whole scripts,” Ashe says. “We were filming in pods. Kofi [Siriboe] shot his whole season in one stretch, and then Dawn-Lyne [Gardner] and me. So to see it all pieced together, I was like, ‘Oh. We went there.’ This wasn’t just Micah and his Season 2 stuff resurfacing. This was an examination of how all of our characters dealt with the news of George Floyd’s murder.”

Ashe says he’s proud to be a part of a show that has chosen to unpack 2020 in such a thoughtful and meaningful way.

“It was a beautiful choice,” he adds. “When I show my future children and students about the summer of 2020, I can say, ‘This is what was going on with Trump as president. This is what was going on behind closed doors.’ It’s like what Hollywood says that nobody was talking about George Floyd’s family and the fact that he was a father and a brother.”

“But we covered every angle. It was beautiful,” he says. “Season 5 is our best yet. It was really intense, but cathartic for everybody to be able to put these feelings somewhere and use our characters as mouthpieces for everything we wanted to scream from a balcony. This is a really pivotal episode, but as the halfway point, it’s also a catalyst for how the season will unfold.”