Warning: This post contains spoilers from Sunday’s episode of Batwoman. Read at your own risk.

This week’s Batwoman delivered a dramatic hour that finally resolved the season’s big mystery: Whatever happened to Kate Kane?

Sunday’s aptly titled episode, “Survived Much Worse,” found both Ryan and Alice, traveling seperately, on the island of Coryana in search of Kate, who disappeared in that plane crash at the beginning of the season. While both believed that she was being held captive by Safiyah, they had very different reasons for seeking her out. Alice claimed she wanted to kill her sister once and for all, while Ryan, who was dying from the Kryptonite wound, was resolved to save the ex-vigilante at the risk of her own life.

The episode’s final moments were a series of jaw-dropping revelations: Alice stabbed Ocean in the heart in exchange for her sister, only to learn from Safiyah that Kate was never on the island; Alice retaliated by torching the Desert Rose fields; Ocean survived the stabbing since Safiyah infused the blade with Desert Rose essence; Penny informed the Bat Team that body parts matching Kate’s DNA were found, and now they think she is truly and sincerely dead; and Ryan’s plant is actually a Desert Rose, meaning she now has the cure for her wound.

In one last twist, we saw that Kate Kane (who has been recast) is still very much alive, not in Safiyah’s clutches but badly injured. She appeared in the sewers of Gotham, unrecognizable beneath bandages but wearing the red necklace, which all but confirmed her identity.

Showrunner Caroline Dries opened up to TVLine about that huge Kate Kane reveal, what’s next for Ryan after being on the brink of death, and the new big threat that’s headed to Gotham. 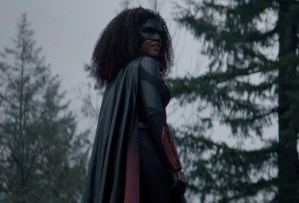 TVLINE | At the end of this episode, it’s revealed that Kate Kane is still very much alive. How does this development set up the second half of the season?
Obviously, this is a huge pivotal moment in the season and the series. We specifically fold it out in the story in this way so that all of our characters go to Coryana thinking Kate’s alive hoping to find her and discover by the end of it that Kate is dead. It allows them to close that door on Kate Kane and allows them to grieve and move on. We decided to let the audience in on this huge secret that while our characters don’t know she’s alive, she is actually alive. We will watch these two parallel stories of our Bat Team moving on to protect Gotham without being in the shadow of Kate, and Kate going through this complicated and serious journey that will be tough for her and nail-biting to the audience.

TVLINE | We also see Alice torch all of the Desert Roses, and Safiyah probably won’t take that lightly. How does this change the dynamic of their relationship?
Safiyah and Alice seem to have this tit-for-tat relationship, and for Alice to burn down the island, she really had to be provoked. Being taunted and made to believe that her sister was alive, only to find out she was never even on the island, I think that warrants a reaction from Alice. For Safiyah, that was her birthright. This field of roses is the most important thing to her culture, to her bloodline, and Alice stripped her of that. If I’m Safiyah, I’m planning my revenge, which will be towards the later part of the season.

TVLINE | Ryan’s plant blooms, and it’s revealed to be a Desert Rose, hitting us with another whammy. Will the show address how exactly this plant found its way to Ryan?
[The plant in a seatbelt in Ryan’s van] was the literal first shot of the season. We as the writing staff knew from the beginning of the season that this plant was the Desert Rose. We hinted that Angelica gave the plant to Ryan, and it will make sense that Ocean, who knows Angelique, had given her the buds from the Desert Rose that he took off the island for safekeeping. So it all will make sense how it got to Gotham.

TVLINE | Ryan has what may very well be the last surviving Desert Rose. How much danger does she face in having this extremely valuable plant, especially if word gets out that it exists?
If Safiyah were to find out about it, it would definitely put Batwoman and the Bat Team and everyone who knows about the plant in the crosshairs. For now, though, Ryan is just acting out of gratitude and appreciation for this beautiful miracle that always represented, in her mind, her mom. It’s her tether to her mom, and so, this motherly essence is the thing that ultimately saved her life.

TVLINE | Ryan and Sophie share this beautiful moment while Ryan’s on the brink of death, and it feels like they’ve hit a breakthrough. How does that experience on Coryana affect their dynamic moving forward?
It is a bit of a breakthrough moment. It shows Sophie’s softer side. In that moment, Ryan is just grasping for some humanity, some warmth and compassion to cling to in her last breath. We also have to remember, though, that Sophie’s having a beautiful moment with a woman she perceives as Batwoman. She doesn’t know that it’s Ryan Wilder. In Ryan’s mind, Ryan believes that Sophie still thinks she’s just a girl who’s lucky she’s free and not behind bars, so they still have some work to do on their relationship. If that had been Ryan Wilder and not Batwoman, would it have been a different story? In Ryan’s mind, it probably wouldn’t have been the same moment, so they still have some growing to do.

TVLINE | With Ryan getting a second chance, how does this affect her mentality moving forward? Are we going to see Batwoman have a different kind of swagger?
There are two things in play here: One, her life was saved by this plant that she connects to her mom, and so she feels more innately like this is destiny. She has a higher calling, and she’s on this earth for a reason, and she shouldn’t leave it yet. The other thing in her life is that as far as everyone knows, Kate Kane has officially been declared dead. A part of Ryan… this is a woman who grew up, and anything that was ever good or that was given to her was stripped away, and the batsuit is the same in her mind. Always in the back of her head, she thought this is too good to be true. Kate’s gonna come back, and it’s gonna be stripped away. Now Kate’s been declared dead, and she’s looking at the batsuit realizing, “Oh, this isn’t being stripped away. I am Batwoman now.” Over the course of the next few episodes, she’ll encounter characters that make her look at herself as Batwoman and as Ryan Wilder and realize, “I need to embrace this role fully. Nobody’s going to come and take it away from me. So who am I? What do I stand for as Ryan Wilder?” I would say [she gains more] swagger and confidence, and more conviction to put her stamp on the symbol and Gotham. 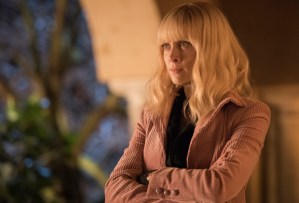 TVLINE | Alice has basically lost everything — her sister and Ocean, who she’s in love with. She doesn’t know that both of them are alive, so where she is at mentally?
Alice is incredibly complicated, and from the beginning of Season 2, we’ve watched her, whether she realized it or not, distract herself from the concept of grief. She’s poisoning all the bats in Gotham and going up against Safiyah and doing all of her Alice rigamarole, so she doesn’t have to sit still for a second and think about what it would feel like if Kate were actually dead. Now it’s been confirmed that Kate is dead, and she feels this tidal wave of grief creeping up behind her, and she’s terrified because she’s never had to deal with that feeling before. It’s too complicated. It’s too raw. She can deal with rage and anger, but grief is too much. We’ll watch this intimate storyline with her as she’s trying to process these feelings and how terrifying it is for her in those hoops she will jump through to avoid these feelings. It’s the same Alice, but we get to deepen her a bit.

TVLINE | A new villain is headed to Gotham. What can you say about who they are, the threat they pose, and what’s ahead in these coming episodes?
We will introduce our Big Bad to fill the rest of the season, and it’s somebody we’ve hinted at: Black Mask. Underneath the mask is this kind of creepy, pompous guy named Roman Sionis, who’s the head of Janus Cosmetics. We refer to him as the Elon Musk of cosmetics. He has a bone to pick with Gotham and the institutions at play. His philosophy is all institutions, all systems can be corrupted, and it’s ironic because that’s kind of Batwoman’s philosophy, too. They just go about dealing with it in very different ways. He leans into the sadistic, so everything with him is a little darker, a little scarier, and he’s definitely a force to be reckoned with.