Sunday’s American Gods finale will find Shadow Moon holding an extremely physically taxing vigil for his dead father Mr. Wednesday, who also happens to be the Norse deity Odin. There’s no assurance that Shadow, whose mother was a Black woman with no celestial powers to speak of, will even make it through the nine-day ordeal. And then there’s the orisha, aka the Yoruba spirits who have literally danced through Shadow’s dreams and visions this season. What part might they play in our protagonist’s fate?

To truly understand, says Nick Gillie, one of the series’ writers, you have to step back and take a god’s eye view of the season as a whole.

Gillie joined the series after showrunner Charles “Chic” Eglee attended Goddess Black, Gillie’s one-man stage show. He wound up helping to weave the orisha storyline throughout Season 3. “My stage piece is about the mythology of western culture as it relates to the collective soul force,” Gillies says. And when he came to the writers’ room, he found a bunch of people who were experts on Neil Gaiman’s book and the mythology it contains. “What I brought is a mythology of what the American godhead is. The Declaration of Independence talks about an equality of humanity,” he says. “It doesn’t mention this specifically, obviously. But regardless of race, gender, sexual orientation, whatever it is: We have a collective equality, and that’s the ‘we.'”

As an example, Gillies points out that the concept of a unifying “we” allowed slaves to survive under crushing work demands in the American south. “So that was what I brought to the show in terms of the ‘we’ soul force, and that became an ideal that all of the characters are now working towards,” he says. “That became a balance against this individualistic ideal that Odin represents.” 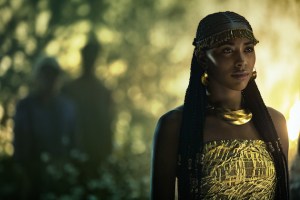 In American Gods, the “we” concept manifests as the orisha known as Chango (played by Wale), Aye (Karen Glave), Oshun (Herizen F. Guardiola) and Yemoja (Bridge Ogundipe). Traditionally sent to guide humanity, the four spiritual chaperones are “trying to bring Shadow into the same fold, the same idea of ‘we are all connected,'” Gillie adds. “And there is a spiritual unity of great power that we have access to.”

As we’ve seen, the orisha have their work cut out for them. Season 3 has witnessed Shadow both trying to distance himself from a manipulative Mr. Wednesday and growing more comfortable with his own status (and, perhaps, power?) as a demigod. During a writers’ room visit before the season began, series star Ricky Whittle recalls, Gillie “sat me down and explained exactly the power and the culture and where we were going to go with this season. The story thread, the history and the information and knowledge that he had has been so helpful and so powerful.”

Whittle adds: “I knew when I was making it, it was so powerful and deep. And it really was a pleasure to put out such a strong message.” He laughs. “You know, American Gods certainly is a show that never shies away from sensitive topics. Never more so than now.”

Along those lines: Between Season 2 and 3, the series made entertainment news after former cast member Orlando Jones announced he had been fired, claiming that Eglee thought the character of Mr. Nancy sent “the wrong message” to “Black America.” The series released a statement saying that Jones’ contract had not been renewed “because Mr. Nancy, among other characters, is not featured in the portion of the book we are focusing on within Season 3” and asserted that American Gods is “one of the most diverse series on television.” In addition, a rep for Eglee called Jones’ comments “inaccurate on so many levels, from the macro to the micro.”

Gillie maintains that the show’s focus on Shadow and Bilquis, via the orisha, this season is not a response to Jones’ criticism. “No, it wasn’t related,” he says. “I know the show seems now, after 2020 has happened and George Floyd was choked to death in broad daylight by the police, it seems that the show was made for 2021. But for me, I was writing this [type of thing] in 2008.” 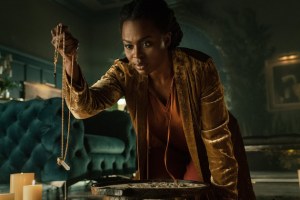 Now, back to the finale. In addition to Shadow’s grueling post-mortem task, we’ll see a newly reenergized Bilquis take definite steps toward a new goal — a path series star Yetide Badaki says her character wouldn’t be on without the help of the orisha.

Gillies is quick to point out that, unlike other otherworldly characters like Mr. Wednesday or the New God Mr. World, the orisha “are not so interested in forcing a human to do or learn a thing. They’re just guiding you in the path of learning. So therefore, part of their philosophy is: You’re never a total victim. There’s always a part that you play, if not in the cause of your trauma, then in continuing it and embracing it.”

So when Shadow climbs up onto that tree in Sunday’s episode to endure whatever the gods can throw at him, he’s actively trying to repair past hurts and become someone he isn’t. Or, as Gillie says, “It’s not just Odin that’s seducing Shadow… Shadow is seducing Shadow, and the orisha are trying to show him that… [They’re] reminding him: What do you really want to be here?”