James Marsters will be looking to sink his teeth into some wealthy marks when he guest-stars on IMDb TV’s Leverage revival — and TVLine has an exclusive first look at his villainous visit.

In Leverage: Redemption, which is currently filming in New Orleans, the rich and powerful take what they want — and the Leverage team is back to take them down. Grifter Sophie Devereaux (played by Gina Bellman), thief Parker (Beth Riesgraf), hitter Eliot Spencer (Christian Kane) and hacker Alec Hardison (Aldis Hodge) all have watched the world change over the years since the original TNT caper drama ended. In that time, it has become easier – and sometimes legal — for the rich to become richer and the powerful to squash anyone who gets in their way.

Sadly down one team member, they find new blood in Harry Wilson (Falling Skies‘ Noah Wyle), a corporate lawyer who is looking for redemption after realizing he’d been sitting on the wrong side of the table for his entire career, and Breanna Casey (Aleyse Shannon of The CW’s Charmed), Hardison’s foster sister who has a knack for computers, robotics… and getting into trouble.

As seen in the exclusive photo below, fellow Angel alum Christian Kane’s Eliot will attempt to thwart foul play on the fairway when Marsters (Buffy, Runaways) guest-stars as Carl, a slick country club hustler who uses his conning of wealthy members to fund a much darker criminal enterprise. 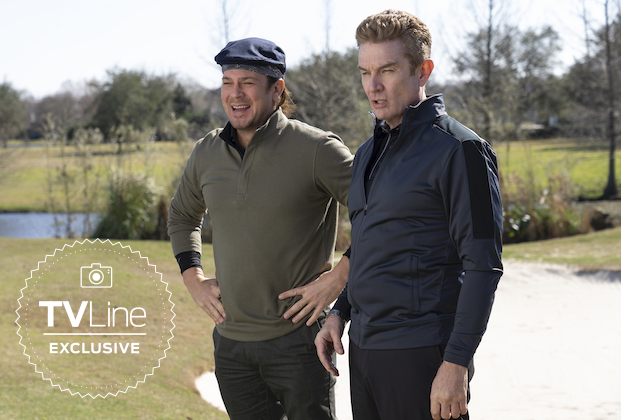 Want more scoop on Leverage: Redemption, or for any other show? Email InsideLine@tvline.com and your question may be answered via Matt’s Inside Line.