The ol’ saying about things getting worse before they get better really gets a workout in this week’s A Million Little Things.

Because it applies to what so many of the Friends of Jon are currently going through! Maggie makes the tough choice to have an abortion. Rome tries to distract himself through the let-down of his movie’s demise. And Eddie sweats and yells his way through residual pain from his accident/the realization that he’s slid into some very troubling territory, sobriety-wise.

Read on for the highlights of “Miles Apart.”

GARY KNOWS! | Gary is walking Maggie to his apartment, where she’ll stay during her time in Boston, when he hits her with the big question: “Are you pregnant?” (Remember, he noticed her drinking water at dinner in the previous episode.) She confirms that she is, and that Jamie is the father. “Didn’t realize you were those kind of roommates,” Gary says, clearly spun but trying to be a good friend.

Maggie promptly announces she’s going to terminate the pregnancy; she has an appointment for the next morning. She finished chemotherapy for her breast cancer less than a year before, and being pregnant is not a good idea for a number of really good reasons. She drops the news on Jamie before she leaves for her appointment — he’s surprised but supportive, and he laments that with the United Kingdom closing its borders as the coronavirus pandemic ramps up, he’s not sure when she’ll be able to return. 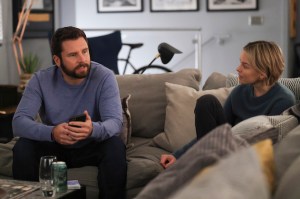 Gary ferries Maggie to Planned Parenthood, sure that he will be able both to be there for her and to make it in time to join Darcy and Liam for a camping trip. The weekend away is a big deal, he explains to Maggie in the waiting room, because Darcy wanted to wait until they were serious to reintroduce her son to her boyfriend. “She’s a really good mom,” he says, then has just enough time to realize why that’s kind of a dud thing to say at the moment before Maggie is called into the exam room. She pauses just before entering, and Gary immediately knows that she wants him there with her, so he follows.

Upon learning that Maggie will have some cramping, bleeding and other unpleasantness after she takes the second pill, Gary promises to hang out with her at his apartment. But when they’re home, she shoos him off to his getaway, using the little white lie that Gina is going to keep her company. First, though, they have a conversation in which Maggie admits “I feel stupid” about everything that’s happened. She’s also so angry that, even though there is no evidence of disease in her body, cancer is still calling the shots in her life. “It still makes every decision for me,” she explains, tearful, adding that now isn’t a great time for her to become a mother BUT she would’ve liked to have made the choice on her own instead of having it forced upon her.

HALF CAPACITY | Rome, still bumming from his movie’s abrupt cancellation, goes into work with Regina to help out. The restaurant is short-staffed, thanks to COVID-19, and she’s wondering how they’re going to be able to stay open when they can only fill the place to half capacity. But Rome generally makes things worse (though, in his defense, I did not know that green tomatoes should not be added to a red sauce, either). And when he’s overseeing the afternoon’s deliveries, a teen comes in selling candy bars… and when Rome’s back is turned, he walks out with four of the bagged orders.

Regina and Rome are freaking about the missing food when the teen returns: He delivered them. We learn his name is Tyrell. And because he did such a good job — and because his mom is having trouble finding work — he’s hoping they’ll give him a job? Regina says she can’t, but she will give him some food to take home to the family. And then Rome buys the kid’s entire box of candy bars for $100. The next morning, the candy bars seem to inspire Rome, who opens his laptop and starts a new script. 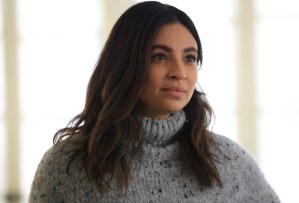 BETWEEN A ROCK AND A REALLY TICKED-OFF GIRLFRIEND | Gary and Darcy are getting ready to leave for the cabin when a call from Gina clues Gary in to Maggie’s tiny deception. So he reluctantly announces that he can’t go on the trip, after all, because “Maggie needs me.” This goes over about as well as you think it would. “I have been so understanding. The airport, all those Skype calls, letting her stay at your apartment,” Darcy says angrily before having a terrible realization: “Are you and Maggie back together?” Gary repeatedly reassures her that they aren’t, and then he tells her the reason he wants to go be by Maggie’s side. Darcy softens. She’s still really not happy, but she gets it. “You should stay. Go make sure she’s OK,” she says.

So he does… but Jamie got there first! Gary arrives in the hallway outside his apartment just in time to see Maggie fall into Jamie’s arms and say, “I’m really glad you’re here.” Oops. So he leaves without anyone seeing him, then drives to the cabin to leave a toboggan for Darcy and Liam, who hadn’t been able to rent one. But he doesn’t stay, phoning Darcy the next morning to a) alert her to the sled’s presence outside and b) let her know that when he meets Liam, he wants to do so the right way. Which is sweet. But, like, couldn’t they just have planned for him to come up the next morning all along? 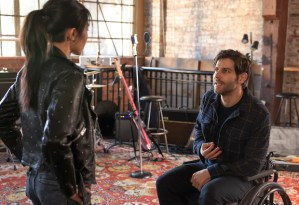 IT’S NOT ROCK BOTTOM, BUT IT’S ON THE WAY | Eddie is in a lot of pain, and he’s just taken his last (stolen) pill. So he calls Dakota and invites her over, hoping that she’ll be able to hook him up with some more. But when she arrives, she proudly announces that their last conversation set her straight, and she’s been totally sober for the past three months. While Past Eddie would’ve been so proud of her, Current Eddie is sweaty, hurting and Not Happy About This At All. Still, when she asks him to go to the studio to give her some notes on a Rolling Stones cover the label is having her record, he agrees.

Eddie offers some great guidance on the track, but he’s in such a bad state, he can barely concentrate. Eventually, Dakota figures out what’s going on. Sobriety has made Dakota rather insightful: After Eddie angrily laments that Theo went ice skating that morning and that’s something they can never do together again, she asks, “Are you taking the pills for physical pain… or something else?”

The whole situation infuriates Eddie, who asks to be taken home. But the next morning, Dakota is back. She thinks that maybe she needs him to work his magic on her songs in order for her to keep having a career in the music business. So she hands him a vial of pills, and he agrees to collaborate. After she leaves, he swallows one pill, and then he swallows another.