With the teams filling up on Night 5 of The Voice’s Season 20 Blind Auditions, the coaches were getting extra finicky. But they did manage to find a few standouts, among them a rocker whose “Zombie” cover left me dead (in a good way) and an R&B singer whose voice was so sweet, just listening to her felt like cheating on a diet. Read on, and we’ll go over all of Monday’s performances.

Savanna Woods (Team Kelly), “Zombie” — Grade: A- | Ahead of her Blind, this formerly globe-trotting 26-year-old was reminded by her dad that as a kid, she’d written a song about a toaster. “That was one of my best songs, though,” she laughed. On stage, she made it hard to tell that she’d never had vocal training. Her Cranberries cover was raspy and raucous, and way more nuanced than you’d expect from someone so untrained. Kelly suggested that the performance had been like if “Patty Griffin and Nirvana had a baby” — and that baby grew up to slay, I might add.

Rachel Mac (Team Nick), “Let Him Fly” — Grade: B | In her pre-interview, this plucky 15-year-old related the story of how her stepmother once cleaned out the house and poof, split on their family. For her Blind, Rachel turned the vibrato up to 11 on an emotional rendition of Patty Griffin that I felt like I should’ve liked more than I did. Maybe, as John suggested, the excitable youngster would have been better off if she’d “toned down the vibrato just a hair.” Hilariously, the one-chair turn was more excited about meeting Blake than being recruited by Nick. After she’d left the stage, the Jonas Brother marveled that that was the level of enthusiasm that was usually reserved for… well, him. 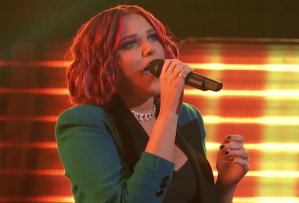 Lindsay Joan (Team Nick), “Nightmare” — Grade: B+ | This 22-year-old pop-rocker, who once toured with Kinky Boots, earned a two-chair turn with an almost ethereal, stripped-down cover of Halsey that let her go ginormous with her big notes. I thought maybe Kelly hadn’t swiveled for Lindsay because she’d heard more musical theater than rawness in the vocal, but she insisted afterwards, “I honest to God don’t even have a reason.” At least John could pinpoint why he hadn’t turned: He’d heard a nervous unsteadiness in Lindsay’s lower register.

Rio Doyle (Team Legend), “When We Were Young” — Grade: B+ | After an emotional pre-interview in which she discussed the brain tumor she’d been terrified was going to take her mom from her, the 16-year-old earned a chair turn from John almost immediately after she unleashed a vocal so rich, it belied her years. And though she sang with as much poise as passion, that was the only chair turn that she got. “How am I alone here?” asked John. Pitch issues, said Nick. Difficulty understanding the words, said Kelly. Well, OK, then. 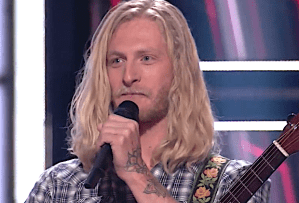 Jordan Matthew Young (Team Blake), “I’m No Stranger to the Rain” — Grade: B+ | This 34-year-old Austinite told us before his Blind that he applied the same work ethic to his music career as he did to his endeavors as a construction worker. And whether he was working hard or hardly working on stage, the three-chair turn’s deep, magnificently lived-in voice was downright impossible to resist. Sure, as Blake said, Jordan may have started off a little shaky; I was more just taken with his voice. By the end, though, if it weren’t for the absence of the sound of a needle scratching across vinyl, I’d have believed that we were listening to a jukebox.

Zania Alaké (Team Legend), “Sweet Love” — Grade: A- | This Michigan mother of two — a banker by day who’s in not one but two bands by night — demonstrated terrific range on her Anita Baker cover as well as a showmanship that made her as enjoyable to watch as to listen to. I was trying to think of the word to describe the richness of Zania’s sweetest notes, but then Kelly handed it to me: butter. Her voice was full of sumptuous butter. 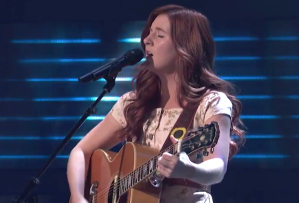 Savanna Chestnut (Team Blake), “Hold Me Now” — Grade: B- | A 25-year-old from small-town Kansas, Savanna pays her bills playing bars and fairs — or at least she did before the pandemic hit. My fingers were crossed so tightly, they nearly snapped when I heard that she said that she was doing a countrified version of the Thompson Twins’ classic — I wanted it to be great. And was it? Well, it was absolutely lovely, and a delightful reinterpretation of the number; just a little limp — or, as Kelly put it, “linear.”

Anna Grace (Team Kelly), “my future” — Grade: B | I’m genuinely torn on this 20-year-old Brynn Cartelli fan, who found the courage to sing in front of others after she nearly died of a blood infection at 17. After Anna inspired a four-chair turn with her runs-packed take on Billie Eilish, John called her performance “ethereal” and cool, and Kelly suggested that it had been a “contemporary take on an old-school vibe.” But pleasant as it was, nuanced as it may have been, it still fell kinda flat for me. Halley Greg, Anna ain’t.

So, what did you think of Monday’s auditioners? A lotta good, I thought, but only Zania and Savanna Woods were really great — for me, anyway. Vote for your favorite below, then hit the comments with your reviews.