Monday’s boisterous Night 3 of The Voice’s Season 20 Blind Auditions introduced a contestant with what Blake Shelton reckoned was “one of the country-est names we’ve ever had on the show” and teed up a coach/competitor matchup that he imagined, owing to their taste in shiny jackets, would “blow the brains out of people’s butts into the toilet, and the toilet will flush itself.”

Told ya it was a boisterous night.

And the singers were pretty damn good, too. Read on, and we’ll discuss their performances, including the one that prompted Nick Jonas to cheer, “Hip, hip Jose!” 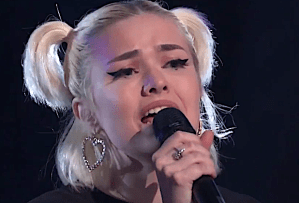 Ryleigh Modig (Team Kelly), “when the party’s over” — Grade: B- | This daughter of a businessman by day/rocker by night expressed before her Blind Audition that she had been inspired by Billie Eilish to live her truth and shake off the pain of having lost friends when she’d come out. On stage, the two-chair turn was compelling but uneven. Most of the time, she sounded really cool and smooth. But when she didn’t, ya couldn’t help but wonder whether she was fully in control of her voice. Maybe, as was theorized, she’d just suffered from a case of the jitters. 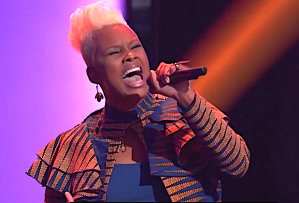 Pia Renee (Team Legend), “Master Blaster (Jammin’)” — Grade: A- | This now-grownup teen mom told us before her performance that as a single parent, she’d been everything from an accountant to a truck driver to a flight attendant “for two whole weeks” while chasing her musical dreams on the side. As her Blind began, I questioned the wisdom of her Stevie Wonder song selection. Her tone, especially that lower register, was ear-catching; I just wasn’t hearing enough range… until boom. She let loose and showed us that her bag of tricks was far deeper than she’d at first let on.

Andrew Marshall (Team Nick), “Gravity” — Grade: C+ | Diagnosed with leukemia in middle school, this 21-year-old was seen through his dark days, he said, by music — in particular John Mayer’s. (In fact, meeting the singer had been his Make a Wish wish.) As he took to the stage, the virtual crowd lit up so much that Blake assumed he had a dog with him. His performance was poised and polished, and he has a nice voice. It was just, like, a 7 of a voice, not a 10. Appealing as the baby-faced contestant is, we’ve already heard better.

Emma Caroline (Team Blake), “Slow Burn” — Grade: C | In her pre-interview, this Alabama twentysomething told us how delighted she was that her oft-deployed dad would be around to watch her performance. And he certainly got to hear a pleasant one. Emma rolled out her notes like so much warm honey being poured over toast. But there was a kind of dullness to the vocal, almost a sleepiness. Blake suggested that Emma had “one of the country-est names we’ve ever had on the show” and a “mountain” kinda voice, but Nick found parts of her Kacey Musgraves cover “a little timid.” I’m afraid I was with Nick on this one.

Ciana Pelekai (Team Legend), “Dance Monkey” — Grade: A- | This native of Hawaii moved to Vegas with her family in hopes of improving her chances of making it in music. Ahead of her Blind, she copped to hoping to work with John or Nick. “He is the cutest out of his brothers, I am sorry to tell you that.” And as luck would have it, her dynamic rendition of Tones & I’s hit got them both to swivel their chairs (though John blocked Nick). She sang with an oomph that was undeniable and appears to be blessed with a personality that could serve as an antidepressant.

Jose Figueroa Jr. (Team Nick), “At This Moment” — Grade: A | As dazzling a presence as his sparkly jacket — the only one more eye-catching than Nick’s — this Zumba instructor almost immediately got a chair turn from John with his supremely soulful Billy Vera cover. Dude’s voice just went on and on and then on some more — to the point that I couldn’t believe that only John and Nick turned. (John was surprised by that, too.) Hilariously, Kelly said that she hadn’t swiveled because Jose had done too many runs — as if that wasn’t something that could be cut down in subsequent performances. 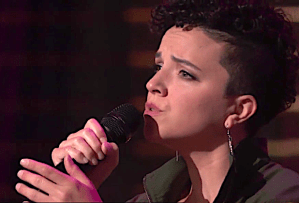 Halley Greg (Team Kelly), “I’m Like a Bird” — Grade: A | Before her Blind, this former science teacher shared that she’d no sooner decided to take a year off to pursue music full-time than… argh. The pandemic hit, stripping the Seattle music scene of the opportunities that had been unfolding for her. At least it seemed like she’d go far on The Voice. She sounded all kinds of gorgeous on her intimate, rearranged version of Nelly Furtado’s hit. Like, that wasn’t just beautiful, it was magical. What. Presence. Wow. How, how, how was she a one-chair turn?!?

Durell Anthony (Team Legend), “What’s Going On” — Grade: A- | A formerly chubby kid, this 34-year-old father of two hit the stage with a high note that commanded attention — and immediately got John’s. From there, the two-chair turn put forth a Marvin Gaye cover that was so polished, he could probably see his reflection in it. Both Kelly and John noted that Durell’s in-between voice — between chest and falsetto — was particularly impressive. I wouldn’t have known to call it that, but yeah… now that they mentioned it… 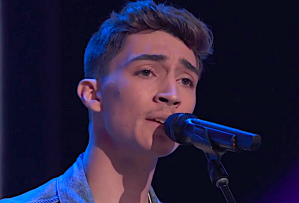 Avery Roberson (Team Blake), “If You’re Reading This” — Grade: B | You almost had to like this painfully shy small-town North Carolinian even before he’d sung a note. How cute was it when he said the ladies at the senior center always fawned over him, but girls his age? Not so much. He wasn’t just endearing, though. He had a lovely voice, not necessarily louder than his speaking one, but perfectly lovely. I wasn’t as blown away as the coaches, all of whom turned their chairs. However, his storyteller vibe and “Aw, shucks” personality could take him quite a ways in the competition.

What did you think of Night 3’s Blind Auditions? Play favorites in the poll below, then hit the comments with your critiques.