The Kathy Stabler Fan Club can breathe a sigh of relief: When Elliot Stabler returns to Law & Order: SVU this spring, as part of a crossover that will kick off the spinoff Law & Order: Organized Crime, it appears that the beleaguered cop wife is alive and kicking.

Isabel Gillies, who played spouse to Chris Meloni’s Stabler before he departed the series after Season 12, will appear in the SVU portion of the April 1 event, Give Me My Remote reports. Kathy Stabler will be accompanied by daughter Kathleen (played by Allison Siko) and son Dickie (Jeffrey Scaperrotta).

The casting returns seem of a piece with what showrunner Warren Leight said in a 2020 episode of the show’s official podcast. Originally, the plan was for Kathy and at least one of the kids to be involved in the Season 21 finale, which was scrapped when the COVID-19 shutdown caused the series to stop production. “We were going to see Kathy Stabler come back, very upset — her son has been rolled by a team of ne’er-do-wells and may have been drugged,” Leight said.

Soon after the Stabler-centric Organized Crime was ordered to series in March 2020, the spinoff’s official logline hinted at a tragedy in the police officer’s life. Stabler, it said, “returns to the NYPD to battle organized crime after a devastating personal loss.” 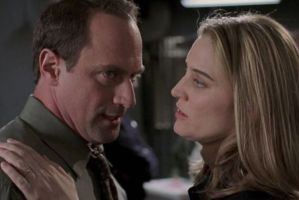 At the time, we posited that the loss might refer to the death of Kathy or one of their kids: In addition to Dickie and Kathleen, Kathy and Elliot are parents to Maureen, Elizabeth and Eli. And that still may be the case — the SVU half of the crossover only accounts for its first hour, after all.

But now, we’re wondering what other type of misfortune may hit Stabler hard enough that he returns to the force. And because we’ve watched SVU since the beginning, our minds are going to some very. dark. places.

We’ll find out soon enough; the SVU/Organized Crime crossover extravaganza will air Thursday, April 1, at 9/8c. (Watch a promo.) Until then, what do you think happens? Hit the comments with your guesses!