As The Voice continued its Season 20 Blind Auditions Tuesday, not only did one contestant dazzle the panel of coaches with his rendition of Lady Gaga’s “Shallow” (reviewed below), but Blake Shelton responded in a way that, for the playfully unrepentant liar, was heretofore unimaginable. Read on, and while listening back through the performances, I’ll explain why.

Connor Christian (Team Blake), “Bright Lights” — Grade: C | Well, hello, Season 20’s gravel voice! This 23-year-old turned three chairs with a Gary Clark Jr. cover that Kelly thought had a “blues bar kinda vibe” to it. I could go along with that description, and I liked Connor well enough: The camera loved his baby face, and he had a little swagger to him. But he didn’t seem to have a whole lotta range. In the end, his adorably enthusiastic parents were probably more memorable than he was. 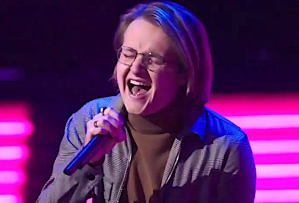 Bradley Sinclair (Team Nick), “Say You Won’t Let Go” — Grade: B- | The definition of adorkable, this Michigan native quit his job at Apple and moved to Nashville… just in time for the pandemic to hit. But he made the most of his Blind Audition, bringing to bear a light rasp and deep urgency that won him two chair turns in spite of what sounded like a bundle of nerves. “Your range is serious,” John noted — but, it bears mentioning, not so serious that it inspired him to swivel with Kelly and Nick.

Gianna Zoe (Team Kelly), “She Used to Be Mine” — Grade: C+ | It looked for the longest time like this 17-year-old California girl wasn’t going to get a chair turn with her competent if unremarkable take on Sara Bareilles. She had a nice vibrato going and a bit of a tear in her voice, the performance just wasn’t an ear-opener, not until she started landing nice, long notes toward the end. Even eventual coach Kelly had to ding Gianna on pitch issues. 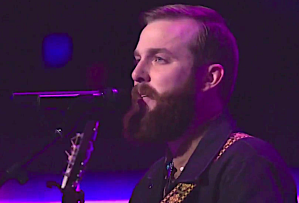 JD Casper (Team Kelly), “How to Save a Life” — Grade: C | And now for something completely different… This 28-year-old Austinite brought to the stage a sorta one-man-band kit attached to a suitcase. But how was his singing? Eh, OK. There was a pleasant tang to the one-chair turn’s voice, it just wasn’t a performance that you’d remember five minutes later (that is, unless you recalled his awesome beard or the traveling-music-store rig).

Deion Warren (Team Legend), “Shallow” — Grade: B | After a tearful pep talk from his folks, this son of a preacherman won himself a three-chair turn with a Star Is Born cover for which the coaches were, ahem, Gaga. And while the upbeat parole officer was definitely the most promising auditioner of the night, I wasn’t altogether sold. In his quieter moments, his lower register brought to mind Tracy Chapman, which is always a good thing. But when he belted, it felt more yelly than passionate. Still, John thought Deion was so nuanced that he wasn’t going to need a lot of coaching. And of note: Blake said that the only reason he hadn’t turned was because, in recruiting Cam Anthony, he’d promised to keep the lane clear for him. “And for once,” he added, “I’m gonna stick to my word.”

OK, your turn: What did you think of Tuesday’s crop of contestants? On your way to the comments with your reviews, vote for your favorite in the poll below.