The following post contains spoilers for The Resident‘s winter finale.

Back in late January, when The Resident finally sidelined Barrett Cain as a Chastain Park doctor and revealed that one of his former colleagues planned to testify about his medical malpractice, I questioned why Cain wasn’t more suspicious of Mina at the time. After all, Mina had voiced her concerns about Cain’s behavior to his face, and threatened to tell his patients about his misdeeds — so why would Cain only suspect Dr. Austin, and never Mina, as the doc prepared to testify against him?

But it seems I may have jumped the gun: As revealed in Tuesday’s midseason finale, Cain has had his eye on Mina all this time — and he’s been thoroughly, methodically plotting his revenge.

At the start of the hour, Mina encountered yet another roadblock with her visa. The immigration office requested more proof of Mina’s medical training in Nigeria, but she was worried Nigeria wouldn’t release the paperwork to her in time to meet the deadline. “Is someone trying to sabotage my career?” she wondered aloud to AJ.

Later, Mina was called out of surgery to meet with someone from the Georgia Medical Board, who quite remorselessly informed Mina that she was under investigation. He asked her three damning questions in a row — Did she once have a romantic relationship with Micah, her patient? Is she currently in a romantic relationship with AJ, her mentor? And did she once run a medical clinic out of her own home? — and after asking to speak with her lawyer first, Mina went to AJ and voiced her strong suspicion that Cain was behind all of this.

That night, AJ paid a visit to Cain’s apartment complex and warned the doc of what might happen if that investigation into Mina didn’t come to a halt. “Fix it, Barrett. Now,” AJ said. “If you don’t, I’m coming for you. You hear me? And you won’t walk away from me ever again.” And he seemed to have gotten Cain sufficiently spooked, because Cain promptly went up to his condo and called someone named Moises Knoll, telling him to call off everything against Mina, including the medical board investigation and her visa woes.

“Sorry, Barrett. That’s out of our hands,” Moises informed the doc. “It’s a moving train that can’t be stopped now.” 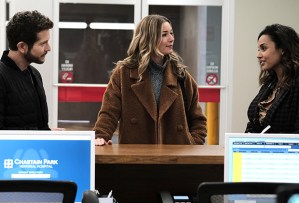 * Nic was forced to confront her traumatic stabbing when the man who injured her, Jay Pickering, showed up as a Chastain patient after getting injured at a riot. Despite telling Conrad and Billie she’d keep her distance from the man, Nic ended up visiting his room, later admitting to Billie that it felt reassuring to see him so broken after what he did to her. Billie then revealed that she was raped when she was just 13 years old, and she shared with Nic some advice on how to heal — more specifically, how to move on and break Jay’s psychological hold over her.

In other Billie news, she could soon be permanently replacing Cain as head of Chastain’s neurosurgery department. Yes, her previous mistake in the operating room cost her former patient dearly, but Dr. Voss believes in second chances, and she offered to reinstate Billie’s residency on a trial basis.

* A new surgical intern named Leela arrived at Chastain, bright-eyed and ready to take copious notes about all of her patients. But after impressing AJ with her attention to detail during his rounds, Leela froze up during a simple ultrasound on another patient, prompting AJ to loudly scold her. She redeemed herself in the operating room later that day, but finally came clean to Devon that she’s dyslexic and struggles with on-the-fly tasks for which she’s had no preparation. Devon sympathized — a friend of his in med school dealt with the same learning disorder — but Leela insisted she doesn’t want to be treated differently moving forward.

* Speaking of Devon… is he a daddy?! It certainly seemed so, after his former love interest Princess Nadine paid Devon a visit at Chastain, with a precious baby in tow. And Irving asked Devon the question we all want answered: “Is that little prince your son?”

OK, your turn! How did you feel about The Resident‘s midseason finale? Grade it in our poll below, then drop a comment with your thoughts!