Warning: The following contains spoilers for Sunday’s heartbreaking episode of The Walking Dead. If you’d rather get crushed while watching than reading, maybe put aside this recap for a spell.

If Sunday’s episode of The Walking Dead was any indication, that Daryl/Carol spinoff is going to be excellent. Mind you, “Find Me” wasn’t all about the BFs — later, we’ll get to why an F had to be dropped from BFFs. It was also about Daryl’s years searching the river for Rick, Dog’s origin story and — well, whad’ya know? — a romance we never knew had begun much less begun and ended. Read on, and we’ll unpack the lot of it.

‘DO ME A FAVOR AND NOT TALK THE WHOLE TIME THAT WE’RE OUT HERE’ | As the hour began, Carol invited herself on Daryl and Dog’s hunting expedition near the river. And at first, it was all fun and games, the buddies bickering like the old married couple that they basically are, over everything from how close Carol had to stick to Daryl to her mediocre fish-filleting technique. But then, their talk grew serious. Ominous, even. After what happened to Alexandria — and when they hadn’t even been there to defend their home — Carol suggested that it “feels different, like everything good in the world is not on our side anymore.” So we rebuild, Daryl said. And if it happens again, they rebuild again. She didn’t like the odds. This world, she fretted, was gonna catch up to them eventually. Not if they didn’t let it, he replied. At that, Dog took off running, leading them to a shack in the middle of the woods. It wasn’t the first time that either he or Daryl had been there, it turned out.

In a flashback to five years ago, we saw… Oh. My. Freakin’. God. We saw Dog as a puppy running up to Daryl at his campsite. “Where’d you come from?” asked Daryl, taking a break from studying his map of the river. Shortly, he rendezvoused with Carol, who updated him on the latest goings-on and wondered aloud how long he planned to search for Rick — it had been two years already. She’d join him, she wanted him to know, except that Ezekiel and Henry — really, the whole Kingdom — needed her. Later, Daryl spotted feet sticking out from under an overturned canoe. But it wasn’t Rick or even a walkerfied Rick, just a walker. That night, not only did a rainstorm soak Daryl’s map, he got struck by lightning. Yeah, he was not having a good day. A year after that, Daryl followed a bigger, older Dog to a nearby cabin, where he leapt into action to take out a walker. But the cabin’s occupant (Bosch’s Lynn Collins) didn’t want or need his help. And she wasn’t about to let the intruder leave. 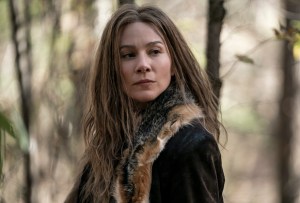 ‘IT’S NOT FOR EVERYONE, LIVING IN THE WILD’ | Back in the present, Dog showed Carol where more maps like Daryl’s were hidden under a loose floorboard. “She lived here?” asked Carol. In fact, she had. Color us intrigued. What hadn’t Daryl told Carol about “her”? Returning to our last flashback, a now-tied-up Daryl clocked a photo of his captor with a boy who had to be her son. All Daryl had done, he explained, was follow Dog and try to help when he’d thought that help was needed. When the woman elected to set him free, he asked if she was going to tell him her name. Nope. As post-apocalyptic scenarios go, it was a reasonably cute meet-cute. Six months later, Dog visited Daryl again, and when he brought his four-legged friend back to his owner, he got the woman to tell him the pooch’s name if not hers. “Dog? That’s it?” Daryl said. “Just Dog?… At least you won’t forget what he is.”

Their interaction was significantly warmer this time around. The woman not only smiled, she asked about the gash on Daryl’s forehead. When he shrugged that living out there was bound to catch up to everybody sooner or later, she replied the same thing he would years later to Carol: “Only if you let it.” Eight months after that, Daryl found himself fighting off more walkers than even he could handle. Out of nowhere, there came a shot: the woman. Once the danger had passed, as well as a close moment that found the two of them hiding face to face behind a tree, he barked at her to stay away from his camp. (Oh, these two!) As she stalked off, she muttered, “Name’s Leah.” Three months later, Daryl threw a catfish at her door. Which is about the kind of apology you’d expect from gruff Daryl, right? In response, Leah stomped all the way to his camp and threw it back at his head. Ah, courtship! They grumbled at each other a bit, then she convinced him that sleeping inside her cabin would be better than losing a hand to frostbite. In the night, he awakened to find her stashing her son’s photo beneath the floorboard. “It’s his birthday today,” she said. 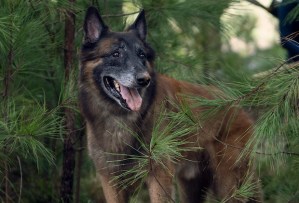 ‘YOU’RE ALWAYS THE HERO, HUH?’ | From there, Leah explained that she’d formed the truly meaningful family in her life with her squad, with whom she’d intended to stay when the world had gone sideways. “They gave me hope, and I tried to give that to my son,” she said, working up to uttering his name. “Matthew was my son.” She hadn’t given birth to him, her sister — “That’s what I called her, anyway” — had. “I lost her when he was born.” And Matthew? She’d held tightly to him when the dead attacked their group. “Dog’s mama was next to me. She was pregnant,” she added. Desperate, Leah had broken off from her family and run with Matthew. Only when they’d reached the cabin had she noticed that the little boy had been bitten. “I said goodbye to him the same day Dog was born,” she said. “I haven’t seen another soul out here since. Not till you came along.” Who’d Daryl lost? “My brother,” he replied. Aww.

After that, it was subtly made clear that Daryl and Leah had become a couple. But the honeymoon didn’t last long. Ten months later, she was angry that he was going away for a few days and challenged him to decide where he belonged — looking for his brother at the river, back with the family he’d left… or with her? “I don’t know,” he muttered. “Yeah, ya do,” she shot back. “Now choose.” The following day, Daryl informed Carol that he wasn’t packing up to come home, he was just moving camp. “I want you to find some peace,” she told him. “I don’t wanna lose you because you can’t figure out when to stop.” Shortly, Daryl appeared to have an epiphany and hightailed it back to Leah’s. But she had taken Matthew’s picture and gone. (Why she’d have left Dog, I can’t fathom!) Before taking off with Dog, Daryl left a note on a map under the floorboard. “I belong with you,” he wrote. “Find me.”

‘STOP THINKING EVERY TIME YOU LOSE SOMEONE, IT’S YOUR FAULT’ | In the present, Daryl admitted that he didn’t know if Leah was dead or alive, and blamed himself for not having been there for her. But it wasn’t his fault, Carol argued. Not Leah or Rick or Connie. “No, that’s on you,” he shot back, “‘cause you never know when to stop.” Carol accepted the blame but refused to be sorry for going after the horde or avenging Henry, “’cause I was right.” Not sure if that’s something Carol would really say and definitely sure it was the wrong time to say it. Anyway, from there, Daryl accused Carol of coming hunting with him not because she’d wanted to help but because she’d wanted to run from her guilt over what the Whisperers had done to Alexandria. Hell, he never shoulda stopped Carol from running when she’d wanted to get back on that fishing boat (back in Season 10’s premiere what seems like a lifetime ago). She could run now, though, he said. “I know where I’m supposed to be. I won’t stop you this time.”

Sadly, Carol decided that once again, she’d been right. “Our luck’s run out, you and me,” she said. Great, emotional episode, no? Hit the comments with your review — plus, see what EP Angela Kang has to say about “Find Me” here.