Warning: If you’ve yet to watch Sunday’s episode of The Walking Dead, you might want to put off reading this interview until you have; it’s spoilerful.

The Walking Dead showrunner Angela Kang knew that the pressure was on. Over the course of its 10 seasons, the zombie drama has paired up one couple (Maggie and Glenn) after another (Rick and Michonne) after another (Ezekiel and Carol). But Norman Reedus’ Daryl has always been a solo act… or so we thought. Sunday’s episode revealed that, during the years he spent searching the river for Rick, he met and fell in love with Dog’s original owner, Leah.

Kang couldn’t screw it up. “Daryl’s one of our most popular characters, and rightfully so,” she tells TVLine. “Fans who have followed the show for years feel as if they are as involved in his life as the people who’ve been creating this story for him. We totally get that.”

But she wasn’t going to steer away from this chapter of Daryl’s backstory — and potentially future story — for fear that it might perturb those who, say, ‘ship his potential matchup with Connie, or will go to their graves thinking that he and Carol are endgame. “You’ve got to tell the story that feels true to the emotional circumstances at the time,” the EP says, “even if sometimes that’s painful to watch for fans who were hoping that the story would go a different way.”

Diverging from what’s expected has historically yielded excellent results, in Kang’s experience. “When I joined the staff, one of the first things we started talking about was building Daryl’s friendship with Carol. Just for some fan history, one of the characters that we were getting the most requests to kill, like on social media and just out in the world, was Carol. 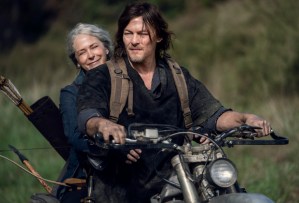 “There was even pressure like, ‘Are you sure you want to put Daryl with Carol? That seems like a boring pair,’” she continues. “And we were like, ‘We really think we can get something out of this that’s interesting and surprising.’ So sometimes, we take these creative risks, especially with Daryl.”

His past with Leah is just another one of those. “We did know that it was going to be controversial,” says Kang, adding that she was even “asked if we were trolling the fans. I never troll the fans. We just thought there were aspects of this story that were worth telling.

“And,” she concludes, “it’s something that hopefully will go to other places that people will find satisfying.”