I have a confession to make: I have seen a grand total of two Marvel movies. (Guardians of the Galaxy and Black Panther, for the record — and I enjoyed them both!) I just don’t watch a lot of action movies these days, and once the Marvel movies began to pile up, I figured I’d just let the whole thing pass me by.

So when the Marvel series WandaVision debuted on Disney+, I hesitated a bit to jump onboard, assuming that I’d be lost. I’m glad I decided to watch, though, because WandaVision has been a revelation: one of the very best things TV has had to offer this year, in any genre. And though I’m sure I’m missing Easter eggs left and right, I’m happy to report that you can fully enjoy the series, even without a Ph.D. in Marvelology.

In fact, if you’re a TV fan — and if you’re not, you’re on the wrong website — WandaVision‘s first three episodes are a true pleasure, because they’re a love letter to television itself. Elizabeth Olsen’s Wanda and Paul Bettany’s Vision play a married couple stuck in an alternate universe that mimics classic TV sitcoms through the decades, from The Dick Van Dyke Show and Bewitched (both presented in classic black-and-white) to The Brady Bunch. The cleverly crafted recreations of vintage sitcoms are spot-on, with impeccable period detail and a healthy dose of kitsch, and there’s an eerie Pleasantville/The Truman Show vibe here, too, with hints of a sinister unseen force orchestrating the sitcom universe. (I didn’t understand what was happening at first, but neither did Wanda or Vision, so I didn’t feel left behind.) 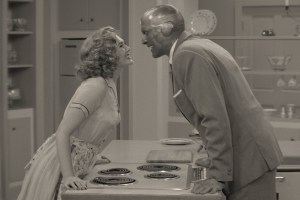 But yes, even I could sense there’s more going on here. Wanda has supernatural powers (just like Bewitched‘s Samantha!), and Vision is a robot of some sort (I think?), and Episode 4 stepped out of the sitcom town of Westview to show us the reality outside, with S.W.O.R.D. agents trying to solve the mystery of how Wanda and Vision got in there. To be honest, the S.W.O.R.D. scenes are less interesting to me, as a non-Marvel fan: My eyes glaze over with all the technobabble, and I just find myself wanting to get back into the sitcom world. The actors sell it, though — Kat Dennings has a lot of fun as sarcastic tech geek Darcy — and the special effects are undeniably dazzling, with a shimmering force field surrounding the quaint suburb. But thankfully, WandaVision doesn’t bombard us with eye-popping action scenes, or rely on them to move the story forward. It trusts its characters to do that.

WandaVision‘s spot-on sitcom parodies continued in Episodes 5 through 7, with spoofs of Family Ties, Malcolm in the Middle and Modern Family, complete with rapidly aging kids. (Each episode has its own era-specific opening credits and theme song, too, which is a delightful bonus.) But last week’s Episode 8, appropriately titled “Previously On,” dropped the sitcom gimmick to fill in Wanda’s tragic backstory and explain how Westview came to be, and it packed a huge emotional wallop — despite the fact that I haven’t seen the Avengers movies that led up to it. (The show did helpfully offer some movie scenes in a “previously on” segment.) We learn that Wanda created Westview to cope with the death of her beloved Vision, using her powers to replicate the safe, reassuring sitcoms she watched as a kid. It’s a powerful statement on grief, and a highly relatable one, too: Who among us hasn’t turned to TV for comfort in times of distress? 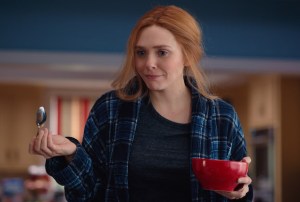 It also helps that WandaVision boasts a wealth of excellent performances, with an emotional depth and range far beyond what you might expect from a so-called “comic book show.” I already knew Olsen was a talented actor — she deserved an Emmy nomination for the little-seen Facebook Watch drama Sorry for Your Loss, playing another woman processing the death of her husband — but here, she delivers one of the most remarkable and versatile TV performances in years. Not only is she able to effortlessly slip into the roles of sitcom moms spanning a half-century of TV, showing off genuine comedy chops along the way, but she nails Wanda’s heart-wrenching excavation of her own trauma. Bettany gamely keeps up with her, playing an array of befuddled sitcom dads with goofy vigor, and Kathryn Hahn — who’s been an underrated secret weapon on TV shows and movies for more than a decade now — absolutely shines as nosy neighbor Agnes, who unveils a secret midway through the season that’s a true game-changer. It’s a joy to watch her sink her teeth into such a fun role. (She deserves it!)

The choice to release episodes weekly was smart, too: It got people talking and theorizing, and gradually built up suspense in a way that a binge release never could have. WandaVision wraps up its first (and only?) season this Friday, and I’m admittedly not that invested in how the comic book storylines play out, or how they lead into Doctor Strange 2 or Thor 4 or whatever. But I am invested in how Wanda and Vision’s story ends, because the show has done such a great job of establishing and developing those characters outside of the Marvel movie context. WandaVision hasn’t fully turned me into a Marvel convert, but it has let me know that it’s safe for a newbie like me to watch a Marvel TV show — with no prior experience required.