Some actors spend their whole lives trying to separate themselves from the roles that made them famous. But Soleil Moon Frye doesn’t roll like that.

Frye was eight years old when her titular sunny role as Punky Brewster turned her into the pig-tailed playmate kids loved having around in the ’80s. Now that she’s all grown up with kids of her own, Frye says the Peacock revival has allowed her to tap into a wave of nostalgia she likely shares with fans.

“Punky has always been such a huge part of my heart. I don’t know where she ends and I begin because we’re the same in so many ways,” Frye, who is an EP on the updated comedy, tells TVLine. “I have wanted to bring Punky back for so long. I’m that person that, literally, if I’m 88 years old and people are still calling me Punky, I’m down. I love her so much. And I am just so grateful.” 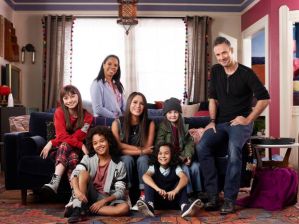 On the new Punky Brewster, the title character is the divorced mother of three who is now fostering a fourth child. The latter is an adorable urchin named Izzy (Quinn Copeland), who is a lot like Punky was as a kid and has been abandoned by her mother as well. There’s also Punky’s ex-husband Travis (Freddie Prinze Jr.), whom she lovingly co-parents with; her bestie since childhood, Cherie (Cherie Johnson); and Cherie’s girlfriend, Lauren (Fringe‘s Jasika Nicole). Together, all eight make up a blended family of biological and adopted siblings, friends who feel like family and former spouses who maintain a necessary and supportive bond. They’re different races and sexual orientations, but they all love to have fun and feel close. Added layers include the return/introduction of Punky’s biological mom, Susan (NYPD Blue‘s Sharon Lawrence) and a fun appearance from Punky and Cherie’s childhood friend Margaux (guest star Ami Foster).

TVLine readers, in kind, responded favorably to the revival and its charms when the show premiered last week, giving the family sitcom an A- average.

“I have always held a place in my heart for a Punky re-awakening, and the universe aligned and the stars aligned, and I just am so proud,” Frye adds. “It’s been this incredible journey that has come full circle, and I am honored and humbled to be able to bring her back to life again.”

Aside from being something the whole family can watch together, Punky Brewster weaves in a lot of sweet touches from the past to drum up warm and fuzzy feelings for kids at heart. This includes an updated version of Henry and Punky’s Chicago apartment and even that cool and colorful treehouse that fans coveted. Punky still rocks brightly colored clothes and Chucks, but she also wears black leather these days. One episode is a full-on homage to the 1980s. 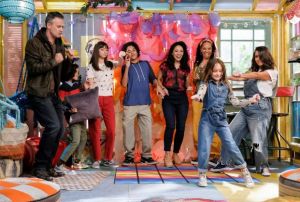 “I’ve got amazing partners that I Iove working with, and we each felt like the authenticity of the original was so pivotal to keep going and to keep the heart and the love and the soul in everything from the costumes to the set designs,” Frye reveals. “All of it was so fundamentally important to stay authentic to the original. I felt like it was my duty to those of us who grew up with Punky to really capture the heart of the original. So I really hope people love it in the same way that they loved the original. I get chills.”

Prinze Jr. says he also felt inspired by the show’s vision and, because of that, parlayed what was originally written as a recurring role into that of a series regular.

“I wouldn’t even have done this show if it weren’t for Brian Austin Green,” Prinze Jr. says with a laugh before explaining that Green is a mutual friend of his and Frye’s. Prinze’s wife, Sarah Michelle Gellar, also worked with Frye on a 1989 kids’ chat show called Girl Talk.

Green “called me up and said, ‘Hey, man. They’re remaking the Punky show. I know you’re not trying to work’ — I hadn’t read a script in five years — ‘but read this. You’re going to love Soleil,'” Prinze Jr. recalls. “I hung up, and I played Call of Duty instead for eight hours. Two days later, Brian called me and cursed me out because the show shoots in L.A. and I wouldn’t have to travel and I could take care of my kids. So I read the script and started laughing. And when I did the pilot, Soleil and I had chemistry right away. It was just easy.”

Prinze Jr. says Punky Brewster also has an old-school sensibility that resonated with him on a personal level.

“It reminds me of the vibe my dad had with Chico and the Man,” he says. “Travis is journeying back to earn trust. He lived the musician lifestyle with drugs and alcohol to the point his wife, Punky, had to file. This is what my mom had to do when my dad battled cocaine and Quaaludes. I wasn’t safe with him, so she had to file. That’s not the main story, but that’s Travis’ story, and I really responded to it. He’s willing to put in the work and earn trust again.”

Frye was also impressed by the chemistry she and Prinze Jr. shared and hoped that fans would enjoy that aspect of the sitcom as well.

“It’s been amazing chemistry,” Frye says. “From the moment when we first met, I felt so connected to Freddie, and I had worked with his wife many years ago and had an amazing experience with her when we were teens. Meeting him all these years later was a joy. From the moment we met, I felt like I had known him for so many years. It was just so fun coming together to do this.”

And more than anything, Frye says she wants viewers to kick back and enjoy the show.