Punky Brewster went straight into This Is Us territory with a tear-jerker Season 1 finale that focused on both biological families and the ones we create.

At first, it seemed like Punky (played by Soleil Moon Frye) and her birth mom Susan (NYPD Blue‘s Sharon Lawrence) would never meet. They’d narrowly missed each other at the 1980s-themed block party in the previous episode, and Izzy’s (Quinn Copeland) description and drawing of Susan did little to help. (What do you expect? The child is seven.) Besides, there was nothing Punky could do to smile and “bright side” her way out of this one. She had to meet the woman who had abandoned her as a child, even if it meant confronting her feelings of rejection and disappointment.

After comically harassing several strangers who walked into the coffee shop, Punky spotted Susan as she headed toward the door and then turned away. Determined to meet Susan, Punky sprung to her feet and followed her long-lost mother into what turned out to be an AA meeting. Hmm. That explains some things. 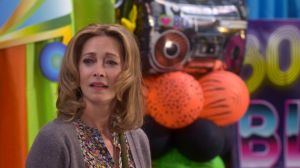 Susan got up and confessed to a room full of strangers that she has been sober for five years, something she hadn’t been in a long time, and that she hoped to be a better person for the daughter she gave up years ago. Excited to see if Susan was sincere, Punky once again sprung to her feet (is this woman partially made of Jack-In-the-Box toy parts?) and revealed herself as Susan’s daughter.

Back at the coffeehouse, Susan attempted to make amends by apologizing and explaining her actions to Punky. Turns out, Susan’s past addictions had her spiraling out of control. And even though Punky, who was seven at the time, didn’t realize it, she was doing more to raise herself and prop up Susan than Susan was doing for her. And ultimately, Susan said, she thought Punky would be better off without her.

And this is where the tears started to flow. Punky said she resented Susan for a long time but forgave her not only when she became a mother herself, but when she realized that because Susan left her, her life turned out beautifully. Punky added that she didn’t need Susan to be her mother, because Henry did that for her, but she could use a friend. Then both women held hands and demanded napkins from the waiter for their soggy, tear-soaked faces. Susan and Punky also discovered that they both have the same sun tattoo. Awww!

Elsewhere in the episode: Punky and Izzy had to appear before a judge to extend her time as Izzy’s foster mom. The trouble with that was Izzy’s birth mom could’ve appeared and contested the extension so that she could reclaim custody. It’s a reality that Punky, Travis (Freddie Prinze Jr.), Hannah (Lauren Lindsey Donzis), Diego (Noah Cottrell) and Daniel (Oliver De Los Santos) had to prepare themselves for as they made Izzy a special “just in case this is goodbye” dinner. Cherie (a still youthful Cherie Johnson) and Lauren (Fringe’s Jasika Nicole) even lent their support morally and legally, as Lauren appeared in court as Punky’s counsel. 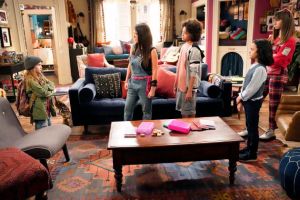 Izzy’s mom, who completed a rehab program, ultimately didn’t show up and Punky helped Izzy embrace whatever she was feeling — disappointment, sadness, relief — because that’s how kids feel sometimes when their birth parents aren’t able to raise them. But what is most endearing of all was when Punky told Cherie she wants to formally adopt Izzy, setting up a smooth and natural transition for a possible Season 2.

Because this revamped Punky Brewster really does deserve another season. It’s not perfect and the writers and producers’ desire to address sexuality and gender freely, but avoid race, as well as the occasionally heavy-handed use of kid snark as a comedy device, is rather annoying. But you’d be hard-pressed to find any current-day family sitcom that doesn’t lean heavily on adolescent sass for laughs.

What matters most is this series about Punky and her chosen family is sweet and winsome, warts and all, and a little Punky Power and optimism could be just what we need to turn around our frowns.

Now it’s your turn! What did you think of the Punky Brewster finale? Grade it below, then drop some comments!