The eighth episode of Season 18 opened with Jack revealing to Gibbs that not only is she ready to move on from NCIS (as hinted in a previous episode), she has already made an offer on a house in Costa Rica. The moment is cut short by news out of Afghanistan that a school bus carrying four young girls was hijacked by the Taliban — and someone left a message scrawled on the bus window: “SLOANE NCIS.”

Jack realizes the message was left by Darya, a “chaperone”/fellow captive who took care of her years ago when she was held hostage in Afghanistan by “The Monster.” Vance cuts Sloane off mid-plea to assure her he has already arranged transport for her and Gibbs to the region, so she can investigate the abduction.

Bishop, Torres, McGee and Kasie, meanwhile, look into the American sender of an email that had tipped the Taliban off to the secret bus route, and this ALbert guys seems to be a regular Joe — until they discover from his associate that he is an infamous hacktivist known as The Albatross. Still, the hacktivist “code” frowns on the involvement in things such as child abduction, so the pieces don’t quite add up.

Back in Afghanistan, Gibbs and Sloane work with a man named Nadi to try to figure out where the girls were taken — and at one point, clues suggest that Jack’s friend Darya was complicit in the abduction.  The appearance of one taken girl raises questions, until a livestream is discovered in which the girls are being auctioned off; the returned girl has epilepsy, and thus was of no value. When Darya turned up in the village dead, thrown from a moving truck and with the note, in English, “GO HOME OR THERE WILL BE MORE BLOOD” attached, Sloane has a bit of a breakdown. “She wasn’t in on it, Gibbs! We couldn’t see her basic act of humanity for what it was. I’m out. I’m done.”

What Sloane actually is, though, is plotting to venture out and find the girls herself, but Gibbs is wise to her and balks. “You can’t ground me when you don’t like the plan,” she argues. “I can when I want you around,” Gibbs counters. “On NCIS, or on the planet?” she asks. “Both,” he states. Gibbs then insists on 1) waiting for Vance to get them sat recon and hopefully some backup, and 2) joining her.

Back in the States, Bishop, McGee et al discover that the sender of the bus route intel had in fact been set up by his associate, who was angry his friend had “sold out.” The team then compels a hacker who had targeted NCIS’ network, as payback for hacking Albatross laptop, to help them find the girls, by sharing the destination for the damning email. That intel leads Gibbs, Sloane and some Marines to where the three remaining girls were being held. 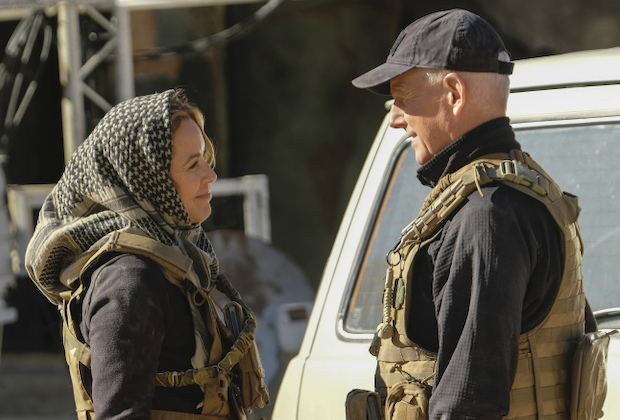 Afterward, Gibbs realizes that Sloane was never going to Costa Rica, that she instead is going to stay put in Afghanistan and continue Darya’s good works. “I did say I needed a change!” she notes.

“I have loved my time with NCIS…. You don’t need me anymore,” she explains. To which Gibbs responds, “I’m not sure about that.” Sloane states, “I don’t belong behind a desk. Never did. And you’re right, I was running, and I don’t want to anymore. I want to make a difference here.”

She then tells Gibbs, “And as for you, if you ever want to visit—,” but he cuts her off by pulling her in for a kiss before goodbye-ing.

What did you think of Sloane’s exit? Also, read Inside Line for scoop on the show’s plan to replace Jack (or not).