Is The Flash due for more blasts from the past? Will Fox’s Star ever shine again? Which of the Good Girls is about to have some good luck? Will Legends reveal more about Gary? Read on for answers to those questions plus teases from other shows! (Email any new Qs to InsideLine@tvline.com.)

One of the mysteries that’s been driving me and my friends mad for the past few years is Gary’s backstory on Legends of Tomorrow. We know his Dad is a dentist, he can’t go home for Thanksgiving, and mind wipes don’t stick. Which all seems very suspicious to me. With Adam Tsekhman finally a regular, are we going to find out what the deal is there? –Vanessa
The Legends team got a kick out of your question, Vanessa — and the EPs in turn said that they promise to reveal Gary’s “wacky and wild backstory” in the Season 6 premiere airing Sunday, May 2. “Although Gary can’t go home for Thanksgiving,” they teased, “a little bit of home is coming to him!” Speaking of Garys….

On A Million Little Things, does Gary have a job…? He hasn’t seemed to work since he finished his cancer treatment.  Makes one wonder how he supports himself. –Aloha, Marge
You make a fair point, Marge! So I asked around and can confirm that Gary did get his actuary job back — and it’s actually joked about in an upcoming episode.

Where is the Star wrap-up movie that Lee Daniels promised us? —Laurel
Lee Daniels —  one of the Black+Bold creators highlighted by TVLine this month — told our Keisha Hatchett that he remains “desperate” to give fans that closure, though it more than ever is a matter of getting people’s schedules together — even if it’s only for “a Zoom something or other.” But make no mistake, Daniels’ ideal scenario, “once the dust settles and the movie theaters open,” is to wrap the series with “a badass movie.” 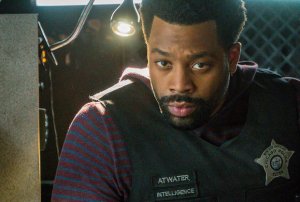 What’s coming up for Chicago P.D.‘s Atwater? Have we really seen the end of his police brutality storyline? –Demar
Ohhhh, far from it. You can expect much more on that front in what I am hearing is a strong episode airing Wednesday, March 10.

Have you heard about any returning villains for The Flash Season 7? –Tyler
In addition to the well-spoiled encore by Ashley Rickards’ The Top in Tuesday’s Season 7 opener, showrunner Eric Wallace told me, “I would not rule out another big villain from the first three seasons — one of my all-time favorites — to appear in Graphic Novel No. 3″ (aka the arc following the Mirrorverse).

Is there any chance that Grant Gustin will make an appearance in the final season of Supergirl? I’ve always loved Barry and Kara’s relationship, and it would be lovely to see them reunited again one last time. –Lauren
Well, I did ask Flash showrunner Eric Wallace if Kara might pay Central City a visit before her own series goes up, up and away, and he didn’t seem optimistic, at least from his end of things. “I wish, but… I don’t know,” he ventured with a heavy sigh. “I would say, ‘Ask the folks at Supergirl,’ not me, because that’s really out of my hands.” (As Batwoman boss Caroline Dries previously explained to TVLine, COVID concerns and enhanced safety protocols, coupled with Supergirl‘s later production start, make such crossovers difficult this season.) 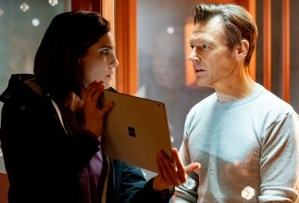 When will we see David Kessler again on NCIS: Los Angeles, as portrayed by producer and writer Frank Military? –Tony
Though the Kessler threat has not loomed especially large as of late, I am told that we have not seen the last of the pardoned baddie — nor the toll that his frustrating freedom is taking on Kensi and Deeks.

Do you know anything about Season 2 of Work in Progress? –Adrián
I am hearing that Season 2 will hit Showtime later this year.

Will we be seeing by any flashbacks of Young Shaun on this season of The Good Doctor? It’s been a while. –Stephanie
And… it will be at least a while longer, as there are no plans at the moment for any such flashbacks. 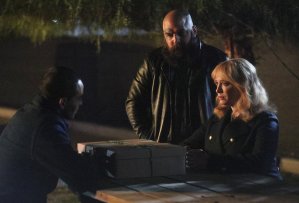 Any chance you have a Good Girls spoiler? –Lindsey
Would you settle for two? TVLine’s Nick Caruso, who has been consuming Season 4 screeners, reports that “while Rio still possesses the gun that killed Lucy (which he, of course, forced Beth to put her fingerprints on), Beth finds a clever way to get her own leverage against the crime boss.” Additionally, “Agent Phoebe Donnegan’s team is itching to arrest their No. 1 suspect… but it may not be who you think it is.”

Is there any hope for Good Trouble‘s Gael and Callie? –Dee
“Gael has a wonderful season, and Tommy [Martinez has] been crushing it,” executive Joanna Johnson says of Callie’s artist ex. “He’s going to get into an internship with a well-known artist, and really start planting the seed to try to get serious about establishing himself as an artist and doing what you need to do to do that and finding joy in his art again. And he and Davia become closer friends” after he helps her out with her students. But when it comes to Gael and Callie, things are more unclear. “I don’t think he’s ever gotten over Callie, and there’s always the question of, is that something that could be rekindled again?” Johnson teases.

Did anyone notice I just answered three Good questions in a row? No, just me? Sigh. Moving on….

Any word on when or if ABC’s $100,000 Pyramid is returning? –Lise
The question is indeed when, because the new season has already been taped and is just waiting on a premiere date. 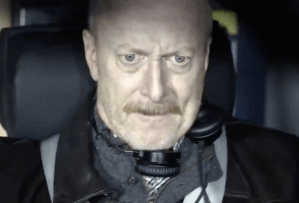 Will this season of Manifest (premiering Thursday, April 1) give us closure about what happened to Captain Bill Daly and Fiona after they both disappeared in Season 1? –Rebecca
Showrunner Jeff Rake declared that to be a “great question” when I delivered it to him earlier this week, before offering up this answer: “Captain Daly and Fiona are not directly a part of Season 3 storytelling, but Captain Daly and all that he represents is a really big part of the season.” Speaking alongside cast member Parveen Kaur, he added, “Not to put words in Parveen’s mouth, but some of Saanvi’s storytelling that takes place in the scientific side of our investigation starts tiptoeing into a theory that harkens back to everything that Captain Daly was theorizing back in the day.”