Fans of The Walking Dead who thought that Negan was going to be Maggie’s biggest issue upon rejoining her old friends were in for a surprise Sunday (or last week, if you watched on AMC+). Turned out, villains from her recent past were out to majorly abbreviate her and her new crew’s future. Who were they, and what did they want? Read on, and we’ll go over everything that was revealed by the first of Season 10’s bonus episodes. 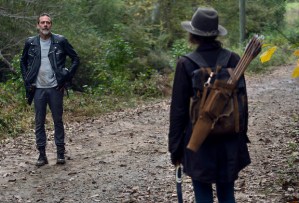 ‘HEY, MAGGIE’ | Picking up where the “fauxnale” left off, “Home Sweet Home” began with Maggie and Judith’s sweet bonding session being interrupted by the appearance of Negan. “I didn’t escape,” Glenn’s killer hastened to note, “if that’s what you’re thinking.” Maggie didn’t reply, she just walked by him like you would a pile of dog poop. “Well, s—t,” sighed Negan. What did he expect, a hug? Shortly, Maggie introduced Daryl and Carol to Cole and masked man Elijah, aka “my people.” She and Hershel had been living in their group’s village until… well, they lost it. Now, she reckoned, they’d just stay with her at Hilltop. Er, about that…

As Maggie reeled from the sight of her former home as a burned-out husk of its former self, Carol volunteered that Negan had been with the Whisperers the night that Hilltop went up in flames — because of her. As Henry’s murderer, “Alpha needed to die,” she said, “and Negan was our best chance.” In fact, he was the reason that they hadn’t lost everything. Wait, wait, wait, whaaat? Cole pretty much said. Were they supposed to all go Alexandria and bunk with the d-bag who’d widowed Maggie? Yeah, that was kinda the plan, at least if Daryl could smooth things over with her.

‘IT’S ACTUALLY GOOD TO SAY SOME OF IT OUT LOUD’ | When Daryl broke away to go with Maggie, Elijah and Cole to pick up the rest of their group — and start that daunting smoothing process — Kelly tagged along to look for Connie. As nightfall approached, the quintet worked out some of their rage clearing walkers from a fenced-in… what would you call that? Storage facility? Anyway, once the coast was clear, Daryl spent some alone time with Maggie, during which she revealed that everywhere she’d gone with Georgie, it had always gone sideways eventually. Finally, Maggie had gotten separated from Georgie after their community near Knoxville had fallen. She hadn’t seen the older woman since. What about the village at which Maggie and Hershel had stayed with Cole and Elijah? “Not now,” she told Daryl. She didn’t feel ready to tell her whole story yet. However, she did admit that she had almost returned to Hilltop after Knoxville.

Instead, Maggie and Hershel had taken a detour to her Nana’s place by the ocean, the spot she and Glenn had once talked about visiting. “We never did.” (Sniff.) There, she’d told Hershel about his family and had faced the questions that she’d always known would come: How had Glenn died… and since a bad man had killed him, was that man now dead? Ultimately, she hadn’t wanted to come back and give Negan any more space in her head. As luck would have it, the following morning, she and her son had met a new community. “It felt like it was meant to be,” she said. “But that’s over, too.” She and Hershel could come back to Alexandria, suggested Daryl, adding, “It’s not decided with Negan. Not yet.” She understood that Carol had done what she’d felt she’d had to to take out Alpha. “God knows,” she admitted, “what I would’ve done if I was there.” 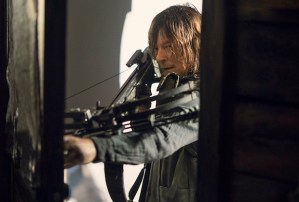 ‘I ACTUALLY GOT SOME SHUT-EYE IN THAT RUST COFFIN’ | The following morning, Maggie was chagrined to find that Kelly had wandered off during her watch. She softened, though, when Daryl explained that Kelly’s sister had gone missing. “He just lost his, too,” said Maggie, eyeing Elijah (whose mask looks even more uncomfortable than zombie makeup, no?). Alas, the stuff Kelly found atop an abandoned truck wasn’t conclusive proof that Connie was out there somewhere. Soon, the group neared their rendezvous point with the rest of Maggie’s peeps — and saw smoke. Two of their friends were dead, the place had been burned, and Hershel, among others, was nowhere to be found!

“It’s them,” said Cole ominously. “They found us.” Um, who exactly? The Reapers, the baddies that destroyed their last community and tended to kill anything in their path. Daryl tracked them to the point at which the footprints split in two directions; then he and Maggie went one way, Kelly, Elijah and Cole, the other. Shortly, Elijah froze while hiding with Kelly. “Hey, are you OK?” she asked. Heaven knows it was hard to tell with his mask on. When he lifted it, revealing Okea Eme-Akwari’s handsome face, Kelly empathized. “Yeah, this is a lot,” she acknowledged. “But you’re not alone. You and me, OK?” Great moment. Meanwhile, Maggie and Daryl found some members of her group… who began being picked off one by one. 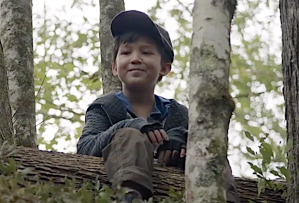 ‘HEY, MOM’ | When at last Maggie and Daryl got the camo-clad sniper shooting everybody cornered — with an assist from Kelly, who took aim with Daryl’s crossbow in the nick of time — the psycho refused to disclose why the Reapers had done what they had. He wouldn’t even confirm that that was their name. He just said, “Pope marked you,” yanked the pin out of a grenade and blew himself up. Thankfully, it wasn’t long after that Maggie found Hershel chilling on a tree branch, right as rain. That evening, as the group camped out en route to Alexandria, Maggie thanked Kelly for helping Elijah, and the two bonded over their sisters. Maggie hoped she’d get to meet Connie one day. Oh, you will, Kelly said. (Right she was, too.)

In a moment alone with Daryl, Maggie told him, “I’ll deal with Negan if I have to. Right now the only thing that matters is Alexandria” and giving her son and their friends a home. Of course, Alexandria wasn’t in the best shape when they reached their destination. “The Whisperers left a parting gift,” explained Carol as she and her neighbors tried to undo the damage that had been done. As Maggie and Hershel walked through town, past Negan, an uncharacteristically uneasy expression crossed the former Savior’s face. This time, he didn’t even have to say, “Well, s–t.” What did you think of the first of our bonus episodes? Grade it in the poll below, then see what EP Angela Kang has to say about the Reapers.