The organization behind the Golden Globe Awards currently has no Black members, but that situation will change, the Hollywood Foreign Press Association announced during the ceremony Sunday.

The HFPA spent time during the annual event to address the lack of diversity in its ranks. The moment was spurred by #TimesUpGlobes, a social media campaign that criticized the fact that not one of HFPA’s 87 members are Black.

Per our sister site Variety, the group has not had a Black member since at least 2002.

On Sunday, DuVernay tweeted: “To be clear, pressure applied to the Globes and its partners from now on isn’t about validation or shiny things from this particular group. The truth that’s not often discussed is that awards play a part in the economic reality of Black filmmakers, artists of color and women creators in this business. Unfortunately, these shiny things matter to those who finance, greenlight, produce, distribute and market our products. Therefore, everyone must have balanced access and consideration so that the playing field can be more equitable for artists of all kinds, colors and cultures.” 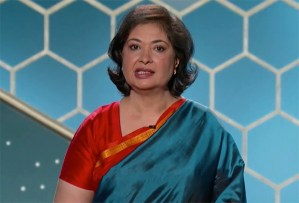 Half an hour into Sunday’s broadcast, three members of the HFPA stood on stage to speak to the imbalance. “On behalf of the Hollywood Foreign Press Association, thank you for joining us. Tonight, while we celebrate the work of artists from around the globe, we recognize we have our own work to do. Just like in film and television, Black representation is vital. We must have Black journalists in our organization,” said HFPA vice president Helen Hoehne.

“We must also ensure everyone from all underrepresented communities gets a seat at our table, and we are going to make that happen,” added chairman of the board Meher Tatna.

“That means creating an environment where a diverse membership is the norm, not the exception,” HFPA president Ali Sar said. “Thank you, and we look forward to a more inclusive future.”

What do you think? Was the HFPA’s addressing of #TimesUpGlobes adequate? Let us know in the comments!