TNT’s Snowpiercer this Monday will answer a burning question amidst the Freeze, by catching viewers up on Melanie Cavill’s trek to the Breslauer Research Station — and revealing why she failed to “ping” the latest weather balloon to be released.

While recapping Melanie’s arduous adventure, the dystopian drama will also flash back to prior to the titular train’s departure, revealing the specific circumstances that led to both Wilford and Alex being left behind.

TVLine spoke with series star recent Performer of the Week Jennifer Connelly about the harrowing Melanie-centric hour ahead….

TVLINE | When last we saw Melanie, she had said a sad goodbye to Alex, hopped off the train with her sled and was ready to trek through the tundra. Most simply said, “How goes it?”
[Chuckles] It’s a mixed bag. As you might expect, there are some obstacles along the way, there are some unforeseen encounters and events and challenges. But she’s really put to the test, and I think that she rises to the occasion.

TVLINE | Will the show “rewind” a bit to reveal what happened as soon as she left the train?
Yes, you meet up with her and follow her on her journey from when she leaves the train and begins her epic snow crossing to the station. And then, it’s all about her voyage of discovery, trying to gather this information so that they can get off that train and find a place to start again on Earth.

TVLINE | Talk about these epic treks through the snow. What does that actually look like for Jennifer Connelly, on set? What are you trudging through?
I was trudging through some synthetic material that was being blown by massive fans inside sound stages in Vancouver, [against a] green screen. Most of the show is practical locations, where we’re filming inside these train cars and in these beautifully designed sets. And once I was inside the research station, it was that way as well. But for the snowy journey, that was on a green screen — although they did pick up some footage without me, out on a glacier.

TVLINE | One of the first thoughts I had as soon as Melanie embarked on this trip was that I wouldn’t be surprised if she’s not alone when she gets there. That seems like the kind of thing the show would do.
Yes, maybe…. Maybe somebody, or something, is there.

TVLINE | Would you almost liken her ordeal at the research to Matt Damon’s The Martian? Is she going to have to “science” some stuff?
She is going to science the heck out of the problem while she’s on her own in a hostile environment, so I can see why you make the comparison. It’s pretty cool, and I have a lot of admiration for that. My [23-year-old] son is an engineer, and I was thinking, “God, wouldn’t it be cool to be just a little bit like Kai?” And I got to pretend I was a bit like Kai in this episode. 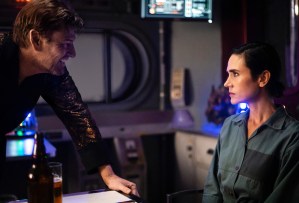 TVLINE | The promo for this week suggests that we will get some flashbacks to pre-Freeze times. What sorts of things will we learn?
The Melanie  that we met at the beginning of Season 1 was a very different woman than we’re spending time with now, and we’ve been following this process of her being able to drop these facades and get back to who she really is, and get back to her original purpose. In this episode, we go much deeper than we have before and we explore what happened in the moments leading up to the train leaving, and how it happened that Alexandra was left behind. We get to understand a bit about the history between Wilford and Melanie,  and what exactly led to her decision to take the train from him. 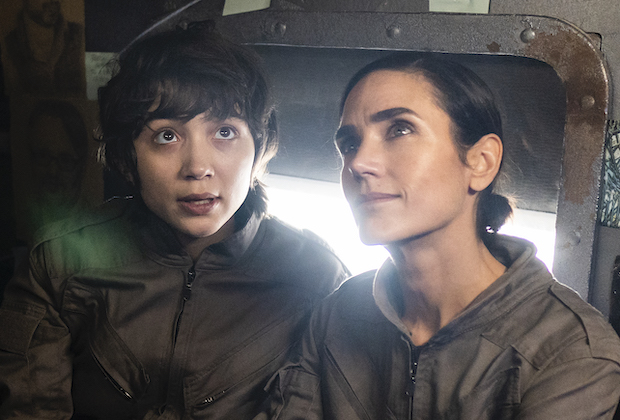 TVLINE | We gave you and Rowan Blanchard Performer of the Week for that episode where Melanie and Alex truly reconnected. Were you happy that that happened sooner rather than later? Because when we first met Alex, I was like, “Oh, man, I hope they’re not at loggerheads for half of the season.” It was nice that they shared those moments just a few episodes in.
I really liked that, yes — and thank you, by the way, that was very nice. I thought it was good because I thought it was a believable balance. I would’ve been really frustrated if it was like, “Oh, we’re just going to forget all this history that we had and assume a relationship that isn’t real,” because that wouldn’t have felt genuine either. That was a huge number of years that have gone by without them actually knowing each other, so I feel like it needed to be earned a bit. But they both want that relationship so much, so I thought it was really moving when they do come together. It was really satisfying. You want that to happen, and I wanted that to happen so much.