It’s no surprise that The Neighborhood has clicked with audiences. The success of CBS’ No. 1 comedy, which was recently picked up for Season 4, hinges on the chemistry of its stars, including Beth Behrs and Tichina Arnold, who play Dave and Calvin’s better halves, Gemma and Tina.

No less than 24 hours after CBS handed a renewal to The Neighborhood did TVLine hop on the phone with the dynamic duo. Together, Behrs and Arnold previewed Behrs’ husband’s guest spot in tonight’s episode, and gave us a taste of what’s to come in March 8’s rock-and-rolling half hour — including an exclusive first look at Dave’s dad band, fronted by none other than Calvin’s virtuosic missus.

TVLINE | Congratulations are in order! How are you feeling after the renewal?
BEHRS | It was the best news ever. We’re just so excited. It’s such a testament to CBS and their faith in us, and to our crew. During these hard times, it’s nice that a crew of 200-300 people all know that we have jobs to come back to next year. It’s the sunshine we all needed to hear, I think.
ARNOLD | Most definitely. Ditto! [Laughs]

TVLINE | Tichina, I can only imagine what Tina has to put up with once Calvin finds out he needs a routine colonoscopy. Safe to say he’s not thrilled about the procedure?
ARNOLD | Tina has been trying to tell Calvin to go to the doctor, period. And there is a big stigma with older people going to the doctor and continuing to take care of themselves. We get older, we get lackadaisical, we get fearful. Calvin is finally convinced to go — we damn near have to trick him — and it’s important for it to happen. It’s a great subject matter, and we hope we can teach people while making them laugh.

TVLINE | Beth, your real-life husband — Mad Men vet Michael Gladis — plays Calvin’s physician, Dr. Fisher. This is the part where I’d typically ask how you got such-and-such on the show, but…
BEHRS | Well, it took a lot of convincing. Actually, Michael came downstairs [while we were at home] and goes, “You knew and you didn’t tell me?” And I said, “I literally have no idea what you’re taking about.” [Laughs] 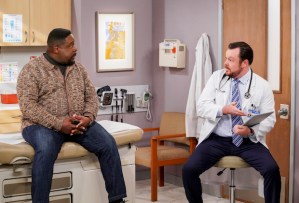 TVLINE | Wait a minute: You’re telling me it was supposed to be a surprise?
BEHRS | He said, “I’m going to come do an episode.” And I had no idea. They were keeping it a secret from me [and it was spoiled]. It was just so exciting because he loves everybody. We’re all really close friends, so he’s met everybody in a social setting. For him to come on, it just felt like he was being added to the family. And I was a total stage mom.
ARNOLD | Oh my god… You were more like the on-set tutor. [Laughs]
BEHRS | Max [Greenfield] was like, “Play it cool, Behrs! Play it cool!” Because I was just jumping up and down, I was giving him thumbs up, I was giving him winks… Max was like, “You really need to tone it down.” [Laughs]
ARNOLD | They just love each other. You know, Beth and Michael are just such a great couple.
BEHRS | I think he’d leave me for Tichina, though.
ARNOLD | [Laughs] I’m just like his Black cousin.
BEHRS | He and Tichina text more than we do. I think he’s genuinely, like, more in love with her — which I’m totally OK with. Because I am, too, you know?
ARNOLD | They’re just great people. And nepotism is good sometimes.
BEHRS | Yes, totally. And sexual favors.
ARNOLD | Not from me! Let’s clear that up!
BEHRS | Ryan is going to write the headline “Tichina Arnold Gives Sexual Favors to Beth Behrs’ Husband.” [Laughs] 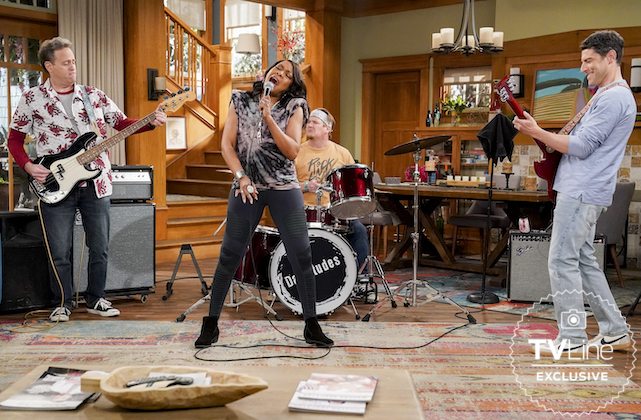 TVLINE | Ooh boy! Now, Tichina, I hear you get to sing in the March 8 episode. Tina joins Dave’s dad band?
ARNOLD | Yes! I love this episode, because I’m an eighties chick. I just love Pat Benatar, so when I found out that I’d be doing [“Heartbreaker”], I was über excited about it. Singing has always been my first love, and I’m from the theater, so I love that CBS gave me the opportunity to be able to sing as well and show one of my other talents. But the episode itself is really funny — and working with Maxie Greenfield is just the best. I love when I have scenes with him because he goes all out. His comedy is the opposite of my comedy — and it completely works.

TVLINE | It seems whenever you and Max get paired — the REO Speed Wagon concert in Season 2, now the dad band — there’s a musical element to the storyline…
ARNOLD | Yaas! OK, you’re paying attention… I love that. Everyone on our show [has] been on a stage, and once you get that stage bug, it never leaves you. So to be able to be on a sitcom, a multi-camera show, and still get to display those other elements you’d see on stage in a theater, it’s always a wonderful thing. 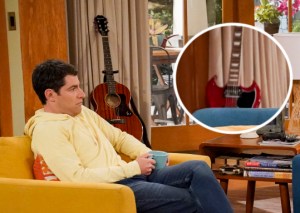 TVLINE | Speaking of music… Beth, there’s a particular set piece in Dave and Gemma’s house that caught my eye. In earlier episodes, Dave and Gemma had an electric guitar in the living room, behind the couch. That’s been replaced by a stunning acoustic guitar. I know you and Max both play, and you’re a big country music fan… Did that influence the switch?
BEHRS | I think it [did]. Our prop master [Gordon Germaine] — first off, he’s a talented musician himself, and he really taught Max and I a lot of what we know. And yeah, Max and I are totally [on set] playing John Prine songs. I like to learn Emmylou Harris and Johnny Cash… We had to step up and say Tichina is the real rockstar; we’re the country bumpkins.
ARNOLD | You have to teach me some country songs. I do know Dolly Parton, Reba McEntire, Bonnie Raitt… I used to sing Bonnie Raitt songs. [Begins singing “I Can’t Make You Love Me”] All right, sorry, I digress…

TVLINE | Are you kidding? An interview and a concert? This is great! Another element of the show that fans enjoy are Tina and Gemma’s girls trips. In Season 1, you headed to Las Vegas and saw Magic Mike Live. In Season 2, you went to Wine Country, where Tina was mistaken for Mary J. Blige. Have either of you given any thought to where you’d like to see them go next? 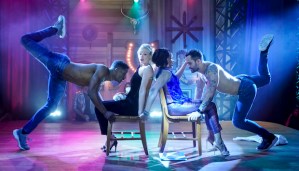 BEHRS | I want them to go on an African safari, where the giraffes can eat the lettuce out of your mouth.
ARNOLD | No!
BEHRS | It comes through your window and—
ARNOLD | No! Tina doesn’t agree!
BEHRS | [Laughs]
ARNOLD | Beth has me doing a lot of white people stuff — and that’s one white people thing I am not doing. I am not allowing a giraffe to eat out of my mouth. It’s not happening.
BEHRS | Ryan, I just heard that as a “maybe.”
ARNOLD | No, the buck has got to stop somewhere! [Laughs]

The Neighborhood airs Mondays at 8/7c, on CBS.