COVID has changed the way hometown visits are conducted on The Bachelor. Instead of having Matt James fly to Minnesota, Georgia, California and Canada this week, producers came up with clever and virtual ways to bring those locations to him while also having the final four women’s families flown to the Nemacolin resort in Pennsylvania, where Season 25 was shot.

For the first date, Michelle acted as Matt’s guide to life in Minnesota. Instead of playing a bunch of Prince songs — is that too much to ask? — and snacking on cheese curds, the two took a romantic bike ride to an empty theater. That’s where Michelle’s elementary-aged class got to virtually meet the special man in her life. One of Michelle’s students, Leona, even asked the question we all want to: “Is that your boyfriend?” The bluntness of the question made both Matt and Michelle blush, and the kids were just getting started. One wanted to know if they were going to get married, while another questioned if they would have kids. 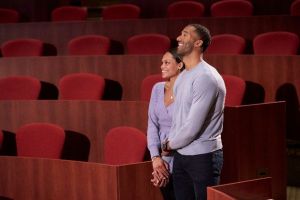 After getting grilled, Matt and Michelle made their way outside for a cute little lunch on the grass. Matt told Michelle he loved seeing her in her element, and they kissed. And then Michelle and Matt got up and just left a bunch of food on the blanket and sauntered off. Um, excuse me. This isn’t a Mad Men picnic. Clean up after yourselves!

Matt then went to meet Michelle’s parents, LaVonne and Ephraim Young, and both were pleased that their daughter appeared so smitten and content. Ephraim brought Black-dad realness and sincerely inquired about Matt’s intentions because he is dating three other women. Meanwhile, Michelle cried and thanked her dad for being there for her when the last dude she was with broke her heart. Ultimately, Ephraim and LaVonne said they supported Matt and Michelle’s choice to pursue a relationship and ended their meet-the-parents portion with a friendly and familial game of basketball.

On to date two with Rachael, who brought her version of Georgia to Matt via a fast car on a country road and skydiving. Jumping from a small plane at 12,000 feet tapped into Matt’s thrill-seeking side, he said, and the two had a blast… right up until the moment Rachael landed badly and hit the grassy ground with her face. Ouch! Strangely enough, the moment allowed Matt to show Rachael his nurturing side as he doted on her and told her he was relieved she was OK.

But Matt would have to brace himself for a different kind of crash landing when Rachael’s father, Darrell  Kirkconnell, peppered him with questions about his feelings for his little girl. Oh, and Rachael’s sister, Trinity, and mother, Kim (who seemingly adored Matt), were there too. While Rachael professed her loving feelings for Matt to her mom and dad, the best Matt could say was that he is falling in love with Rachael. This kind of bummed out Rachael because she was hoping that Matt would ask her father for a marriage blessing, but he didn’t. 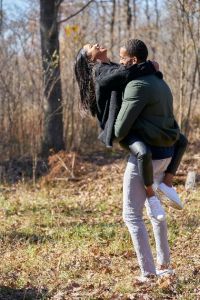 MATT’S BEST MOMENT | Bri got date No. 3 with Matt, and to pay him back for that wild ATV off-roading they did on their first outing, she took him off roading in a muscular green jeep. There was a lot of mud — so that’s California-ish, right? — and also a lot of kissing and jumping into Matt’s arms. Strangely, Matt said that he’d grown too “comfortable” with Bri, which gives the impression that he is taking her for granted. Hmmm. Hopefully, that’s not the case because Bri quit her job for you, my dude. Put some respect on her name. That said, Matt had a promising meet-and-greet with Bri’s mom, Lauren, and her best friend, who is also named Bri.

MATT’S WORST MOMENT | His date with Serena P., on the other hand proved less promising. In order to experience a taste of Toronto, Serena P. taught Matt some Canadian colloquialisms and delivered a tasting line with everything from poutine to a fried-dough dish called beaver tails. The two even played hockey for Matt’s fourth and final date. But after crying about a past heartache to her mom, Serena said she realized she wasn’t feeling Matt the way he was feeling her. And later, when Matt came back to check on her, she confessed her uncertainties and bowed out, which made Matt cry. Hmmm. Looks like Matt should’ve picked Pieper instead of Serena P.

THIS WEEK’S TRAIN-WRECK MOMENT | Despite his tears, in a lot of ways, it felt like Serena P. let Matt off the hook, so shouldn’t he be thanking her? And then after she was gone, it made absolutely no sense to have a rose ceremony when there were only three women remaining and three roses. If anything, the pomp and circumstance of it all really only served to piss off Bri, who understandably hated getting the last rose. Like, for reals? Come on, Matt. You could’ve talked to the producers and cancelled that mess.

BACHELORETTE STOCK FALLING! | Knowing what we know about Rachael’s past racial insensitivities and the fallout it caused, it would be easy to say Rachael’s stock is falling, but that’s not necessarily true, previews or not. Matt seems as much into her as he is Michelle and Bri. Considering that next week is The Women Tell All, we’ll all have to wait until March 15 to learn the truth.