The Bachelor‘s Season 25 opener last week included a lot of deep and meaningful examinations on race and cultural expectations — and producers promptly and handily chucked them in Week 2. Mentions of Matt James being the first Black Bachelor became irrelevant this Monday night in order to establish the commercial real estate broker’s top love contenders and solidify Victoria as this season’s villain. And can we talk about Victoria for a minute?

Matt, 28, surely sees through the charade of this self-proclaimed “Queen.” Of course Matt didn’t witness firsthand how brattily Victoria pouted when he selected Bri, 24, for his first one-on-one date (more on that later), or how Victoria bumped heads with Jessenia, 27, after loudly and obnoxiously proclaiming her jealousy of Bri. But he did see how Victoria, 27, forced her way into a wedding picture with him during the group-date outing. And that kiss she planted on him bordered on assault. Victoria also became visibly upset when Matt later gave the group-date rose to Lauren, the 29-year-old corporate attorney from Miami who shares Matt’s love of the Lord.

How could Matt have missed Victoria’s glares and eyerolling? But he must have, because when she approached him at the cocktail party the following night, he believed her hyperbolic claims that Marylynn is a “toxic manipulator” who has been bullying her. Of course, such admissions conveniently arrived after Matt gave Marylynn, 28, her favorite orchids as a loving gesture, but Matt didn’t seem to notice the timing of that either.

For a guy who is astute enough to memorize a woman’s favorite flower and notice that Sarah, 24, had a family issue weighing heavily on her during his other one-on-one date, he sure misses a lot. Which is it, producers? Is Matt sensitive and intuitive… or selectively so? Victoria is undoubtedly a plant, but it would be nice if her “role” on the show wasn’t so annoying. By the time Victoria ruined the vibe at the cocktail party, the whole vibe of the episode was tarnished and Sarah passed out from the stress, interrupting Matt’s ability to send home Victoria or Marylynn or both. 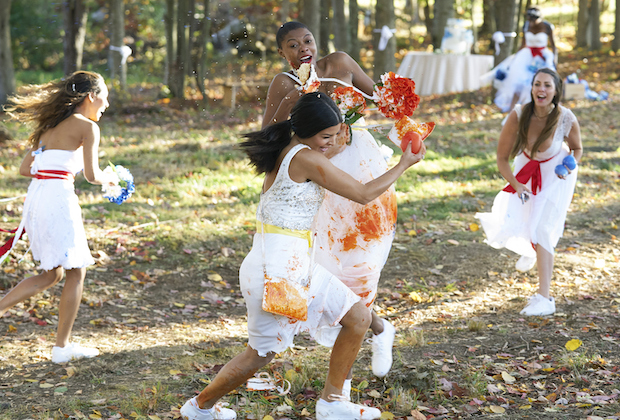 Matt’s Best Moment
That said, Matt had some fun-to-watch high notes. This includes slipping into not one but two hot tubs with two very different but very promising contestants. The first romantic soak arrived during his first date with Bri. The two got dirty and flirty on an ATV and then ended the muddy outing by jumping in a wood-burning hot tub. Of course, because it required firewood power, Matt took off his shirt (swoon) so he could chop a log in half. Hmm. That whole hot tub is powered by two little slabs of firewood? OK. Anything for another one of Matt’s shirtless moments, we guess. Oh, and a lot of hot tub kissing took place.

The two ended the date with an intimate dinner where Bri talked about the difficulty of growing up without her dad taking an active role in her life, something Matt says he knows about all too well. They kissed at dinner and kissed some more at a fireworks show-for-two. Well, the other women could see the fireworks, too, but they didn’t get to make out with Matt while watching, like Bri did.

The second memorable exchange came during Matt’s date with Sarah. First, the two enjoyed a breathtaking aerial view of Pennsylvanian forestry from the front seat of a biplane and then they enjoyed a romantic picnic. While talking, Matt felt like there was something Sarah wasn’t telling him about her dad. So, Sarah decided, unprovoked, to tell Matt about her father’s heartbreaking battle with ALS during dinner. A relieved Matt thanked Sarah for her honesty and vulnerability and the two kissed and ended the night in an old-fashioned hot tub, sans firewood.

Matt’s Worst Moments
Matt falling into Victoria’s web of lies was definitely a low point for the North Carolina native. But his kiss with Lauren with his eyes open felt creepy. Close your eyes, Matt. Make us believe you’re into this woman.

This Week’s Train-Wreck Moment
Whatever that game was on the group date, it takes the cake for the most hackneyed moment of the show. Was it supposed to be football with wet-paint fighting and cake throwing? All while in wedding dresses…?? Sigh. That was a lot.

Bachelorette Stock Falling
That’s a tough one. It’s tempting to keep dumping on Victoria because she’s terrible. That said, it seems like Matt has all but forgotten about Khaylah, 28, his North Carolina homegirl. The healthcare advocate shared a romantic moonshine break in the cargo bed of a pickup truck in Week 1, but didn’t get any alone time with Matt during Week 2.

What did you think of Week 2, and the progress of Matt’s connections?