Fox on Sunday night debuted Cherries Wild, a primetime game show that had already set itself apart from the pack by way of its clear Pepsi (but not Pepsi Clear) branding.

Midway through the half-hour, the players (in the premiere, a married couple) reach for a giant lever and pull it back to get the 30-foot-tall slot machine’s five reels spinning, hoping to rack up dollars, Wild Cherries or any number of other winning symbols, while avoiding the whammy of a Cash Stash-draining “X.”

Given the fact that it’s a video slot machine — meaning, no actual reels are being sprung into motion — a viewer already had cause be a bit removed from the drama of where they land. But a disclaimer that appeared at the end of the premiere made the lever-pulling portion of the show even more inconsequential, revealing that, to put it simply, the slot machine outcomes are determined well beforehand.

“The program does not use a real ‘slot machine,’” the disclaimer starts, explaining: “Each spin in a particular game is the product of a game play combination that is determined in advance…. On each tape day, an independent compliance company randomly assigns those predetermined combinations to the teams taping that day.”

Perhaps to reassure that the “predetermined combinations” are not being compiled in such a way as to keep Fox flush, the disclaimer makes clear, “At least one of the teams on each tape day will receive a combination that has the potential to lead to the Grand Prize” — $250,000, as oft touted by host Jason Biggs — “if the game is successfully played to its conclusion.” 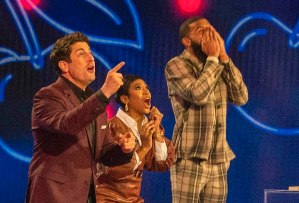 Skimming the above, you may be inclined to surmise that the players are thus only there to ceremonially “pull a lever” and then watch the “predetermined combinations” be displayed by the giant slot machine, that they have zero game play input. But in the early rounds, players do answer a series of themed trivia questions that can win them Wild Cherries (to later use to improve a slot machine pull) or cash (to buy additional spins). So, there is some “skill” involved (as the promos claim), and a half of a whiff of strategy.

It’s only the outcome of the slot machine pull, using the comically ginormous lever, that apparently is pure theater. There is no correlation between the force or duration with which one pulls the lever and how the reels spin, as is the case with, say, The Price Is Right‘s wheel, the titular Wheel of Fortune, or even the strategic placement of the balls atop The Wall. Rather, it’s more akin to Fox’s own, still-on-hiatus Spin the Wheel, in which the length and speed of each spin is determined at random and not by the player’s tug (though the wedge on which the ball eventually settles is pure physics).

What did you think of Cherries Wild, the few of you that tuned in?