We still have lots of questions about Wanda Maximoff’s true intentions on WandaVision… but Monica Rambeau has become just as big a mystery as of late.

Ever since she got tossed from The Hex in Episode 3, Teyonah Parris‘ S.W.O.R.D. agent has been a total enigma: Her post-Hex X-rays (Hex-rays?) came back blank, her very cells have changed as a result of her time in Westview, and she’s been chatting with an as-yet-unseen aerospace engineer who could help her go back into the mind-controlled town, which Monica seems eager to try.

“In my opinion, she wants to go back [into The Hex] because she realizes that while Wanda is sorting through her grief, she also is truly holding a town hostage,” Parris explains to TVLine with a laugh. “There is the level of, ‘I understand what you’re trying to deal with,’ but also, ‘You’re not allowed to do this.’ We’ll watch Monica sort through the dichotomy of the two. How do you help and know that someone is doing something they shouldn’t, but still empathize with what they’re doing?”

Ahead of WandaVision‘s seventh episode (dropping Friday on Disney+), many of our current questions about Monica are topics that Parris can’t explicitly tease. She’s unable to offer any hints about the identity of Monica’s engineer friend (even as fan theories abound), and she’s equally tight-lipped about whether Monica and Jimmy Woo stayed safely outside of The Hex while Wanda expanded it in Episode 6. (“My mother asked me the same thing, too,” Parris reveals, when asked if Monica and Jimmy sped away in a S.W.O.R.D. vehicle quickly enough. “I’m going to say I should not say.”) 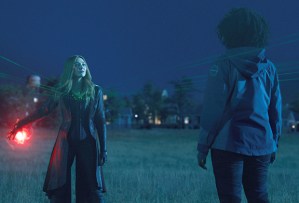 But Parris can elaborate on why Monica has so ardently defended Wanda in recent episodes, despite the pain Wanda caused her in Westview: The two women are bonded by loss, she says.

“Not only did [Monica’s mother] pass, but Monica wasn’t there to help her mother transition. And that’s a very hard pill to swallow,” the actress shares. “The guilt and the shame and whatever other grief she might be trying to sort through, while returning to work on a project she doesn’t even typically do — there are parallels between Monica’s grief and trauma and tragedy, as well as what Wanda is experiencing. Monica connects with Wanda on that level.”

Meanwhile, Monica’s bond with Carol Danvers aka Captain Marvel — formed when Monica was a child — appears to have diminished somehow, given Monica’s recent, cold reaction to Captain Marvel’s name. With Parris confirmed to appear in the MCU’s Captain Marvel 2 film, she hints that “we do have a lot of real estate and time to play with the relationships between Carol and Monica.”

As for whether WandaVision will offer any further explanation of Monica and Carol’s apparent rift before the show ends, Parris will only tease, “There’s still a lot more story to be told” in the series’ three remaining episodes.