The way WandaVision ended Episode 5 left us with X-citing questions, to be sure. But two characters’ brief debate over Endgame‘s ending was puzzling as well.

Midway through “On a Very Special Episode,” S.W.O.R.D.’s Captain Monica Rambeau, FBI agent Jimmy Woo and Dr. Darcy Lewis take a beat to take stock of “The Hex” and the heretofore unseen amount of power Wanda would need to conjure and maintain the artifice. Yet during that back-and-forth, things that Monica said and did pointed at blanks to be filled in — if not hint at a secret kept. 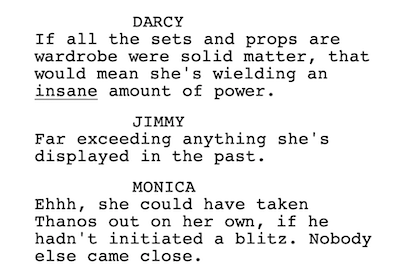 Wait, what? The first speed bump this dialogue hits is when Monica seems to offer first-hand testimony about how Avengers: Endgame‘s final battle played out. For one, she surely wasn’t on hand for it; she had just un-Blipped in her late mother’s hospital room. Two, there is no morning-after “box score” for Avengers fights. There is no SportsCenter recap. And while at least one podcast I listen to contended that a lot of beings were on hand for that massive post-Snap throwdown, I don’t really see them being so basic as to race out to give postgame interviews.

So, what is Monica basing this opinion on? “She could have taken Thanos out” and “Nobody else even came close” are strong statements to make. It’s so fervent an endorsement of Wanda’s capabilities, it’s almost as if the Sokovian sorceress’ publicist wrote it — if it’s not the opinion of Wanda herself. It’s provocative to think for a half-second (before the theory falls apart) that Wanda in blasting Monica out of the Hex in fact escaped the prison in a known ally’s form, so as to covertly strategize from the outside. But again, Monica has been too uniquely active a character for that theory to hold up. Right?

Now, fan boy Jimmy, we could argue, may have first-hand access to intel about how Endgame went down — maybe even from Ant-Man/Scott Lang, who surely gets chatty over a few beers. And as a former S.H.I.E.L.D. agent, maybe he heard tell of Carol Danvers’ 1995 exploits, though it always seemed as if Nick Fury kept that on the down low. 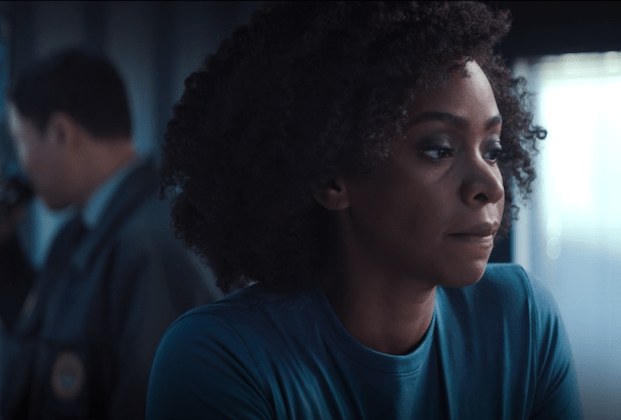 No, what’s most notable here is Monica’s reaction to Jimmy’s statement. There’s no indication of a warm familiarity with Carol Danvers, though we know that one at least once existed, back in 1995. Monica instead purses her lips, then darts her eyes downward, as if she’d rather not speak of Captain Marvel at all. But just to be clear:

Brrr. OK, Monica really does not want to talk about Carol Danvers. No more subtext. What could have went down between Carol and BFF Maria Rambeau’s daughter, in the decades since Captain Marvel? Is that a question that Captain Marvel 2, in which Teyonah Parris will again play grown Monica, will answer? Thought: Did Maria contract her cancer in the course of helping Carol with some radiation-rich doohickey?

A few more knee-jerk theories and questions, coming out of Episode 5:

♦ Agnes has been around both times Tommy and Billy sprouted up, and has only ever had a quip to make about the unimaginable. Is she (whomever she is) facilitating their growth? If this mirage is “all for the children,” maybe someone is in a rush for them (and any latent powers) to reach maturity? 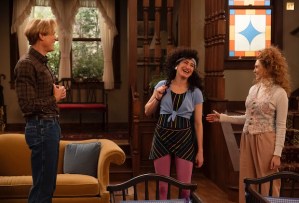 ♦ If one subscribes to the theory that Agnes’ true self is actually the Westview victimizer, I’d posit that she forgot/fumbled her line (“Should we take it from the top?”) as a means of pretending Wanda in the one is in control, maybe to foster division between her and Vision.

♦ Vision’s co-worker Norm definitely was not talking about Wanda when, pulled out of his fugue state, he referred to “her” and the pain “she” was inflicting on him. Norm surely knows Vision’s wife, he would have said her name. (Unless he only heard his victimizer’s voice/Sokovian accent.)

♦ Acting Director Heyward sure seems intent on painting Wanda as a “terrorist,” cherry-picking and characterizing behaviors from her past. Easy Theory: Wanda learned Vision’s corpse was being wrongfully experimented on, broke in to retrieve it, created and retreated to the Hex as a means of “resurrecting” him, and now Heyward is trying to reclaim his lost “weapon” — possibly enlisting another powerful sorceress, Agatha Harkness, to infiltrate. 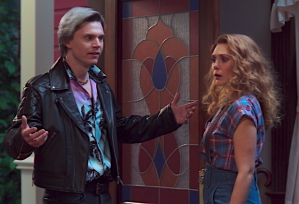 ♦ That final scene… well, it clearly raises lots of questions, by having the X-Men films’ version of QuickSilver/Pietro Maximoff appear on his “stinkin’ sister” Wanda’s doorstep, instead of the MCU version played by Aaron Taylor-Johnson. Yes, Darcy observed that Wanda’s twin has been “recast,” but will she have anything to observe beyond that? Does Darcy see “that guy from American Horror Story” playing Pietro? Will a facial recognition scan cough up a news report about an event from one of the X-Men movies? Or he will he register as simply a stranger?