Tell Me Your Secrets isn’t just the title for Amazon’s latest thriller: It’s also amantra that’s likely running through the minds of all of the series’ major characters throughout Season 1.

There’s Mary, played by The Leftovers‘ Amy Brenneman, a traumatized mom who desperately wants to know the whereabouts of her long-missing daughter. There’s John (The New Adventures of Old Christine‘s Hamish Linklater), a serial predator who takes a job that capitalizes on his criminal past.

And then there’s Emma (The Undoing‘s Lily Rabe), the former girlfriend of the serial killer who might have murdered Mary’s daughter — only, thanks to blocked memories, Emma can’t remember much about whether or not that actually happened.

“I was always really fascinated by relationships where you can love someone but not know these huge truths about them, and our capacity for secrets,” series creator and executive producer Harriet Warner (Call the Midwife) tells TVLine. “I love the idea of: Can you have complete intimacy without complete knowledge?”

We enter the story years after Mary’s daughter, Theresa, disappears. Emma, who went by “Karen” before the Feds changed her name and relocated her to Louisiana, is starting over and grappling with the horror that she might have aided and abetted — or even maybe committed? — such a heinous act. “I love the idea of a woman forced into Witness Protection because of, essentially, the public’s reaction to her,” Warner adds. “She’s almost as vilified as the man she loved.”

The dark drama’s 10-episode first season drops in its entirety on the streaming service Friday. And while we don’t want to give away too much ahead of time (seriously, there’s a big ol’ twist we did NOT see coming), we did chat with Warner and Brenneman to glean some nuggets you need to know before you watch.

THE CAST | In addition to Rabe, Brenneman and Linklater, Tell Me Your Secrets‘ cast also includes Enrique Murciano (Without a Trace) as Emma’s counselor, Pete; Elliot Fletcher (The Fosters) as Mary’s son, Jake; Charles Esten (Nashville) as Mary’s husband, Saul; Emyri Crutchfield (Fargo) as Emma’s new friend, Jess; and Richard Thomas (The Waltons, The Americans) as Bodie, the unofficial mayor of the town where Emma lands. 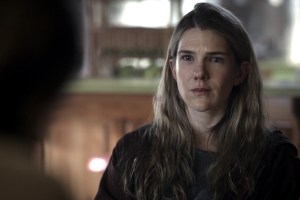 THE APPROACH | Though women in peril is certainly one of Tell Me Your Secrets‘ throughlines, Warner says she “almost didn’t think gender” when writing the story. “These characters did sort of drive themselves, and this is a show driven by women and really revolving around women and society’s judgment of them and these feminine ideals.”

THE WAIT | Tell Me Your Secrets was originally greenlit as a pilot at TNT in 2017 and ordered to series at the cable network the following year. The series eventually would not go forward at TNT, despite all episodes having been filmed, but Amazon picked it up a few months later. “This was very unique in my experience, because certainly I’ve had pilots not picked up, or movies that have gone straight to streaming or video. But this is a completed, 10-episode thing,” Brenneman says. She credits executive producer Bruna Papandrea — who also had a hand in The Undoing and Big Little Lies — with helping secure a new home for the series. “She’s known for a certain kind of female-driven mystery thriller,” Brenneman notes. “If anyone is going to shepherd this, it’s going to be her.”

ENLISTING EMMA | After Rabe turned in what Warner calls “an extraordinary read,” the American Horror Story alum was cast as Emma/Karen. “What Lily brings to you is restraint,” the EP says. “She really spoke to me as someone who had the capacity for a hugely other life, a capacity for secrets that were locked to herself, in a way… She has this extraordinary humanity, this subtle strength. But also this veil. There is definitely stuff that we will never get to unless she decides to share it with us.” 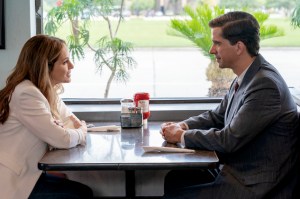 MAKING MARY | Brenneman’s character’s huge loss “becomes a catalyst for reinvention,” Warner previews. “She has a foundation that exists only because her daughter is gone, but she also has power. She has a platform. She has an audience.” And how Mary chooses to wield those elements made playing her difficult “but also really epic,” Brenneman says, laughing. “Being in her skin was just awesome.”

DIRTY DEEDS | As the series progresses, Mary and John get pulled tighter and tighter together via an arrangement that starts as one thing… and morphs into something far darker. The situation gets rather messed-up for the characters, but Brenneman says, pretty fun for her and Linklater. “It’s, from the beginning, shadowy and dirty and secret and all of those things where pathology really thrives,” she says, laughing. “I think Mary tries to keep making this distinction, like, ‘I’m an upstanding citizen and you’re slime,’ but more and more, they are two peas in a pod.”