If Clarice wants any shot at getting to the bottom of the drug trial conspiracy, she may have to (at least) try to play nice. But knowing what we know about Starling, it seems trust will continue being a major hurdle for the PTSD-stricken agent who, to be fair, has witnessed a lifetime of horror thus far.

In Thursday’s second episode, Agent Starling is not only dealing with the aftermath of going rogue, having spilled the truth to members of the press in last week’s premiere (read our recap here), but she also must begin reckoning with her past. When she’s called to return to Appalachia to help deal with a heavily armed fringe militia group, all of her walls start to close in.

(If this episode seemed especially procedural when compared to the premiere, co-creator Jenny Lumet explained on THR’s TV’s Top 5 podcast that this was the first episode filmed during the pandemic, so they were very limited on locations and guest cast.)

At the top of Episode 2, we learn that Krendler issued a counter statement saying that Clarice spoke prematurely about the “serial killer” at hand. Ardelia suggests that maybe “going rogue like that sends your team the message that you don’t trust them,” which certainly gives Starling something to chew on.

A siege between law enforcement and a Tennessee militia group called The Statement begins when an ATF agent is shot on the group’s property while trying to deliver a warrant. Lucas Novak is the charismatic leader of the group, which started off as a rehab clinic, but quickly became a heavily armed faction. When Clarice arrives, she finds herself smack-dab in the middle of the standoff, which of course flies way off the handle.

Krendler tells Clarice the only reason she’s there is because he can’t trust her out of his sight. He plans on formally requesting that she be removed from his team. She’s partnered up with Murray Clarke for the day, an agent who has no patience for Clarice’s rank-breaking. “Something’s eating you, and that’s true wherever you go. If you stay in the field, Krendler’s right, we’re all at risk,” he says.

Clarice finds a boy hiding in the brush, which gives her flashbacks to her own childhood. When she tries to talk to him, he runs off into the farm house. Seconds later, the kid emerges with a megaphone. Novak wants to talk, but he’ll only talk to “the woman I saw.” Knowing Novak is a collector of women, Clarice puts on some makeup — and a hidden microphone. She leaves her guns with Esquivel, who tells her the team wants to trust her, but trust is a two-way street. 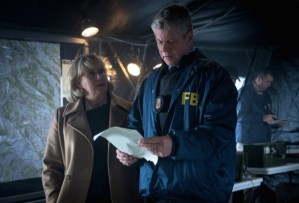 Clarice enters the house, and it’s a strange scene. Armed men stand around, while women with needle marks in their arms sprawl out on the floor. Clarice tells Novak that since a federal agent was shot on his property, the FBI needs the shooter. Novak plays dumb. He has no idea who fired those shots, he says. Meanwhile, he strings up green beans for leather britches, which sets off a flood of memories for Clarice — her mother rinsing blood out of her dad’s hat, the Buffalo Bill case, her therapy session, her brother…

Ruth Martin arrives just as a firefight breaks out, but Novak finally agrees to negotiate with the local sheriff. Clarice is off the hook, but instead of returning to command, she scales around to the rear of the house and sneaks in through a window. She finds a hidden compartment leading to a space in between the walls. There are multiple cameras set up, and when she hits play, she sees the women of the house forced into prostitution. The sheriff, meanwhile, is dirty and in cahoots with Novak, but despite knowing the team’s been given a patsy, Martin orders for them to pull out.

Clarice finds the boy once again and deduces that the bruise on his face is from the kickback of a rifle. He is to blame for the initial shooting, but it was clearly a call for help. He didn’t call the sheriff because “when he gets mad, my mom’s friends end up dead in the woods.”

While sitting down on Novak’s couch, Clarice regales him with a tale of her sheriff father and the power he once had, only to compare Novak to a coward from her past. Their conversation gets heated, prompting Novak to confess to paying off the sheriff and plenty other local officials. He threatens Clarice at gunpoint, knowing she’s unarmed, but she’s lucky enough to be pushed against the very same window the sharp-shooting Esquivel is pointing at. She ducks, allowing Esquivel to snipe the guy dead.

Martin orders the sheriff to fire half of his dirty cops and gives him six months to resign. She plans on turning him into a state’s witness when the time is right. Martin then tells Clarice that Krendler withdrew his transfer request, and that’s when Starling tells the attorney general that her dad was killed on the job when she was young (which we already knew from The Silence of the Lambs).

In the episode’s final moments, Clarice goes to thank Esquivel, who confirms he’s got her back. Maybe there’s hope for this team after all.

Now it’s your turn! What did you think of Clarice‘s second helping? Tell us in a comment below!